The highlight of this volume is Charless' "Missouri & Illinois Magazine Almanac, for 1818," the first almanac published in Missouri territory. Complete in 60 pages, it is signed by the publisher Joseph Charless on the title page. In addition to the usual calendar pages, it includes tables of officers, courts, fines, and attorneys for Missouri Territory; courts and court officers in Illinois Territory; recent acts of Congress regarding Missouri land settlement and bounty claims; and 5 pages of description of the towns in Missouri Territory. Drake's Almanacs of the United States (#4552) lists only 4 examples of this historic issue, 2 of them being imperfect. Only one other has been traced on the market, in the Midland Books catalog for 1956.
Next in the volume is the even scarcer second St. Louis almanac issued by Charless for 1819. Drake traced no surviving copies of the 1819 almanac, although its existence was inferred from a newspaper advertisement. It is apparently also complete at 60 pages. Also included are the 1822 Cummins' Missouri and Illinois Almanac, followed by a consecutive run of 12 Charless' Missouri Almanacs from 1823 to 1834, most of them complete. Drake was unable to trace any examples of 6 of these later Charless almanacs (1826, 1827, 1828, 1829, 1832, and 1834), again inferring their existence from advertisements. Copies of some of these have since been traced in libraries (the 1819 at the Huntington, and 1827 through 1829 recently acquired by the American Antiquarian Society), but they remain quite scarce. Rounding out the volume are 6 Pittsburgh almanacs for 1814-17 and 1820-21, most of them incomplete.
The early history of this volume can be told with unusual precision. Joseph Charless (1772-1834) was a pioneer printer in Pennsylvania, Kentucky and Missouri Territory. He arrived in St. Louis in 1808 as the town's first printer. A reasonable hypothesis for this volume would be that as Charless began to contemplate the creation of Missouri's first almanac, he acquired the run of 4 Pittsburgh almanacs for 1814 to 1817; he or his son Edward signed all 4, although they were not the publishers. Bound next are the first two Charless' Almanacs for 1818 and 1819; the first apparently signed by Joseph as his personal copy. The little collection next passed to B. Allen of St. Louis, whose signatures appear in many of the almanacs dated 1825 to 1834. This was apparently the early St. Louis attorney Beverly Allen (1800-1845), who came to town in 1827. Allen apparently added two partial Pittsburgh almanacs from 1820 and 1821 for completeness, and the St. Louis Cummins almanac for 1822, before completing the run with Charless almanacs through 1834. The next owner was John McAuley Eager (1817-1869), who signed the first almanac and the binding; he came to St. Louis to practice law in 1841 and returned to his native New York in 1852. He soon sold the book through the New York book dealers Lewis & Blood, a partnership which ended in 1857; their book tag appears on the front pastedown. William C. Shelton was apparently the next owner, signing the flyleaf.
A detailed contents list is available upon request. 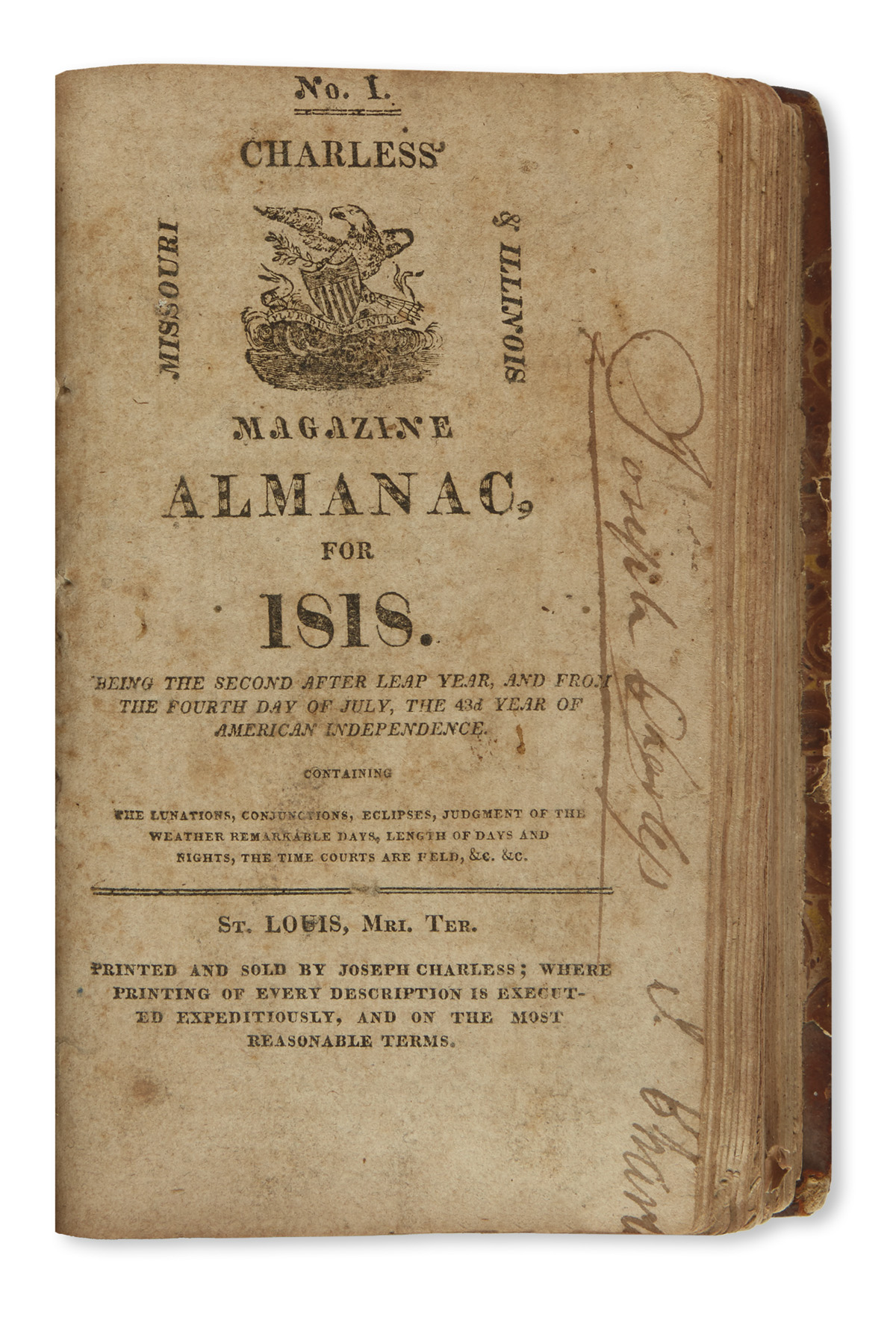