This ledger was kept at the general store in Keshena on the Menominee Indian Reservation, primarily dating to 1861-63. The reservation had been created by treaty in 1854. The ledger records purchases made by members of the tribe and also whites living on the reservation, such as school teachers and missionaries from the Catholic Church. Each individual's purchase history is recorded on a separate page, and each item is noted with its price and quantity. William Powell is noted as a half breed and government interpreter. Oshkahenawniew, brother to Chief Oshkosh, has an account, along with many other named Menominees. Items purchased include foodstuffs such as molasses, pork, tea, sugar, cranberries, and flour. Household items include fabrics, most often flannel and calico, but also velvet, silk, and denim; skeins of yarn, buttons, and spools of thread; pipes, soap, nails, and ready-made clothing such as shoes.
After its initial use as an account ledger, the volume was used to record accounts of important local or national events, and lists of the property of several deceased persons. One highlight is the page-long text of a speech, which begins "I stand before you the representative of disinherited race. A few years ago, my people, then numerous and happy, held undisputed sway over the prairie." It is unsigned and uncredited, but also appeared in the Sandusky Daily Register on 6 February 1872. It appears on page 156, and again in part on page 176. On page 208 is transcribed a long published letter by the agent at the Comanche Agency dated 18 August 1858 concerning the schools there.
The account book may have belonged to Joseph Gauthier (1818-circa 1899), a prominent Menominee leader. He had been a blacksmith and the official interpreter for the Menominees until his replacement in 1860. From 1860 to 1866, he operated a general store in partnership with Charles M. Upham (1837-1913), who may have made most of the ledger entries. Gauthier's name appears frequently, particularly in the later memoranda entries. A small crude drawing of him appears on the otherwise blank page 140, noting that "his Indian name is Sanna-wahna-qua-hah." Provenance: acquired from a Menominee by the consignor in Phoenix, AZ. 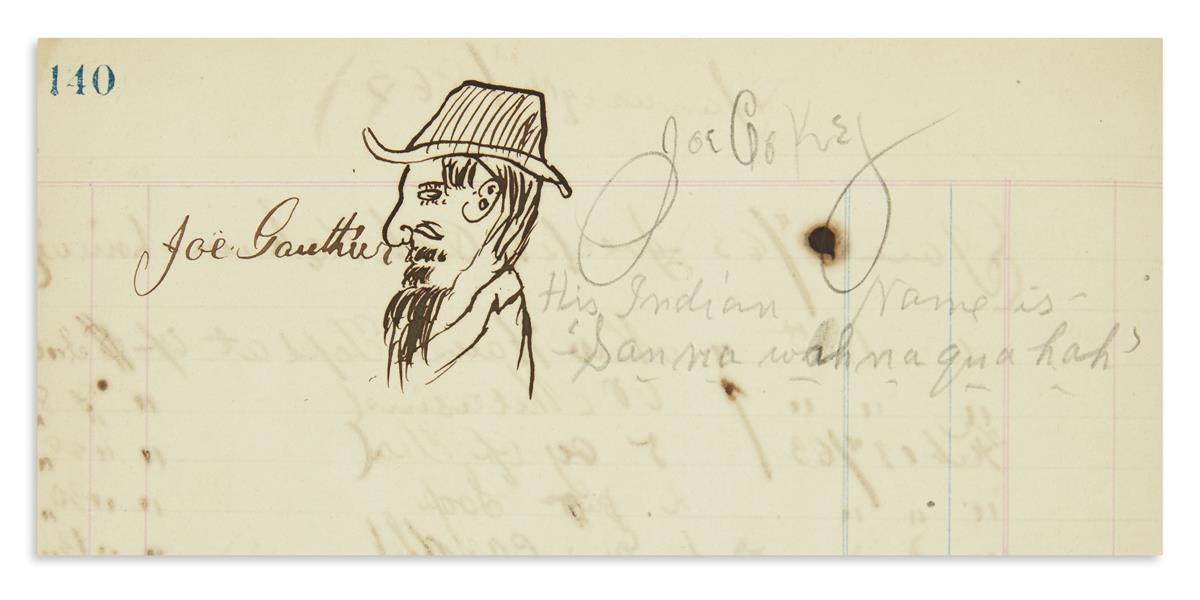