Adam Cyrus Reinoehl (1840-1900) of Lancaster, PA graduated from Franklin & Marshall College in 1861, and then enlisted as a private in the 76th Pennsylvania Infantry, known as the Keystone Zouaves. He was promoted to quartermaster sergeant in December 1862. A natural writer, he sent frequent letters home from the front for publication in the Lancaster Daily Evening Express under the pen name 'Demas.' He also kept this diary, which he titled 'Soldiering in Secessia: Rough Sketches of Matters and Things, as Seen while Campaigning in the South, in the War for the Union, by a Zouvee.' Reinoehl had a remarkable eye for detail, and used it to convey the tension and excitement of a soldier's life.
Reinoehl was present at the capture of Fort Pulaski in Georgia, which fell after an innovative artillery bombardment in April 1862. The Union generals demanded the surrender of the fort. 'Col. Olmstead in answer to the demand replied 'I came here to defend the fort, not to surrender!' Had he said no more, the answer might have made him immortal, but with Secession bragoddocia he added 'I give you an hour to leave the island.'' When the shelling began, 'from a high sand ridge which was crowded with soldiers anxious to see the battle, Charlie and I watched the bombardment. Near us stood one of the New York Engineer Corps, who excitedly followed the effect of shot with exclamations of joy. 'Now we will see fun,' he said, catching my shoulders, as the mark curled above the batteries on Goat Point, and the deep thunder of the heavy columbiad struck on the ear a moment after, and the dust and bricks flew from the corner of the fort. . . . Wild cheers were heard on the beach and the news spread that the flag had come down! . . . It had, however, been cut down by a piece of shell. It was again hoisted on the parapet and the struggle continued.' The next day after the firing ceased, "from battery to battery the glad shout went, and out in the swamps where the members of Company D kept anxious vigil in lofty tree tops, the glad news spread. . . . Pulaski had surrendered unconditionally. One more victory had been added to the brilliant list of Union triumphs.' (pages 58-62).
The regiment first saw combat at the Battle of Pocotaligo on 22 October 1862. 'On went the Seventy-Sixth, past the station where the red flag showed where the surgeons were ready for their work, past the Wabash marine battery with its middies and its gallant tars, past the soldier dying and his comrade wiping the clammy sweat from his features growing rigid; past the wounded all covered with blood borne to the rear. . . . My feelings were indescribable as shot and shell came whizzing overhead into the trees, clipping the boughs and pattering near us. For a while I was fidgety, but I became accustomed to the wild battle music, and till the end of the fight felt no more concern. . . . General [Alfred] Terry dashed in from the road—'Col. Strawbridge, can you advance?' 'I can try, sir' was the reply of the Col. at the head of his column. 'Then go on,' and the 76th went on and won glory. . . . The men seemed insensible to fear, and fought like heroes. The old lieutenant of Co. K . . . cheered on the men: 'Go in, boys, our cause is just, God is with us, pour it into 'em,' he shouted enthusiastically. 'Give us your hand, lieutenant,' said I, biting off a cartridge. 'That's the way I like to hear a man talk.' We both shook hands, then I rammed the ball home, capped my gun, and sent the leaden messenger over the swamp.'
Reinoehl was stationed on St. Helena Island, SC on 25 June 1863 when the 54th Massachusetts Infantry (of 'Glory' fame) arrived: 'This evening the 54th Mass, the first free colored regiment from the north, which lately arrived in the department, landed on this island. It is a splendid looking regiment, the men intelligent looking, finely equipped, with a full brass band. They were accompanied by quite a number of very black filles du regiment!' (page 164).
Reinoehl was wounded at the disastrous First Battle of Fort Wagner on 11 July 1863. He told the story three months later after leaving the hospital: "I could see platoons fall, and shouted 'Go in, 76th' when I felt a sharp twinge in my left arm, which dropped by my side. . . . I immediately started for the rear, and fortunate for me it was, for had I waited five minutes longer I would have been prisoner. To go back was as dangerous as to go forward. The air was alive with shot and shell, but I felt perfectly reckless and reached the beach where the danger was less. Soon the broken columns of the 7th Conn. and 76th came past and I met Capt. Diller who helped me along.' When he reached the hospital, ' I was ready to sink down any place. Seeing a piece of canvass with what appeared to be a heavy roll at one end, I sat down and was going to lay my weary head down when a rebel prisoner ran out exclaiming 'Don't lay on that dead man!' One look was enough and I arose' (pages 169-170).
Reinoehl was also a good amateur artist. In the rear of the volume are three pages of pencil sketches. The first shows Fort Pulaski before and after its reduction by Union artillery, April 1862. Next are a chapel and small church in Legreeville, SC, 23 June 1862. Finally, he sketches his camp headquarters at Hilton Head, SC on 1 May 1862.
After the period of this diary, Reinoehl returned to active duty as a lieutenant and was later brevetted as major. After the war he served in the state legislature, as a district attorney, and as Lancaster County postmaster. Judged solely by its literary quality, this may be the best Civil War diary we've seen, and we've seen a few. 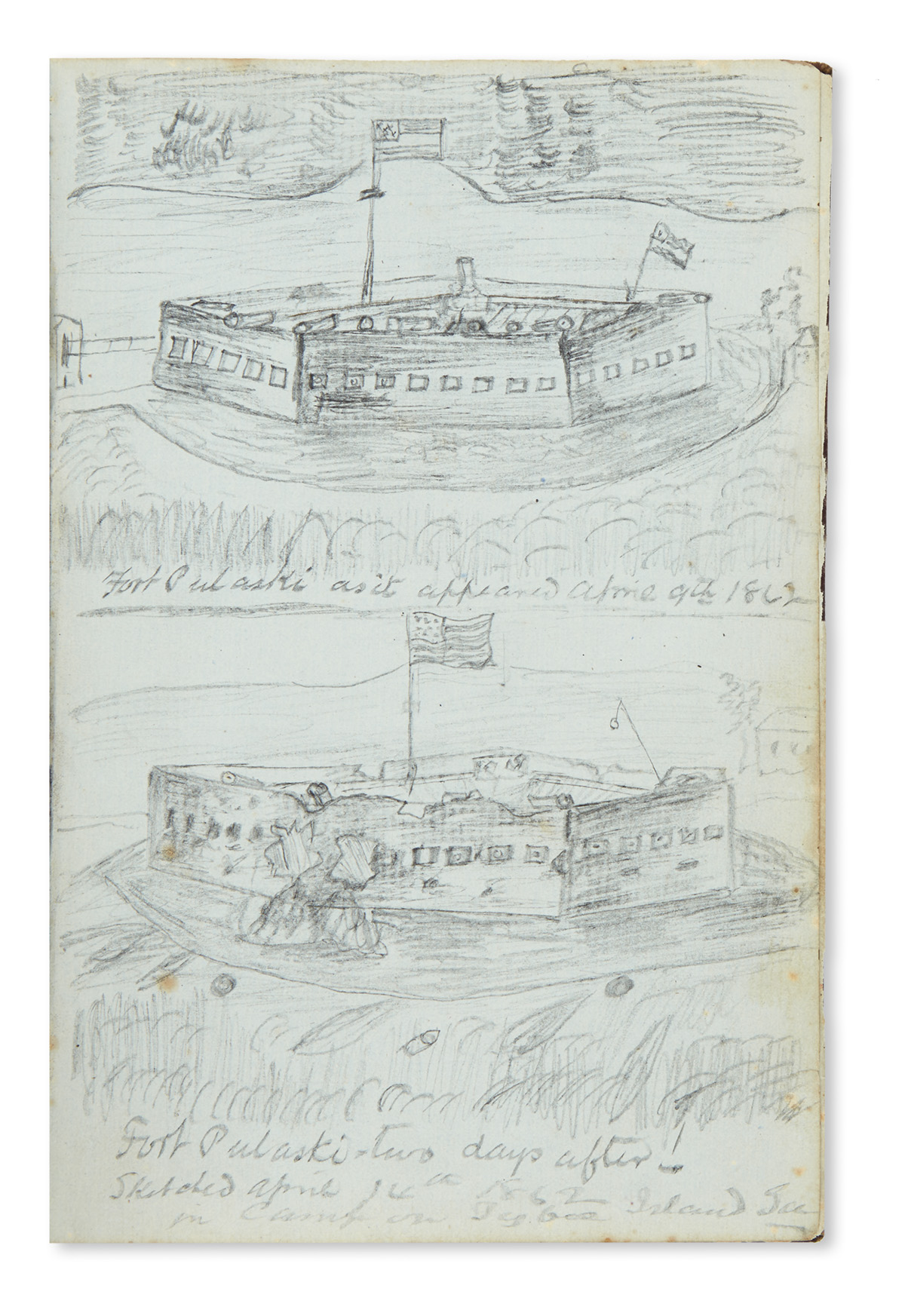 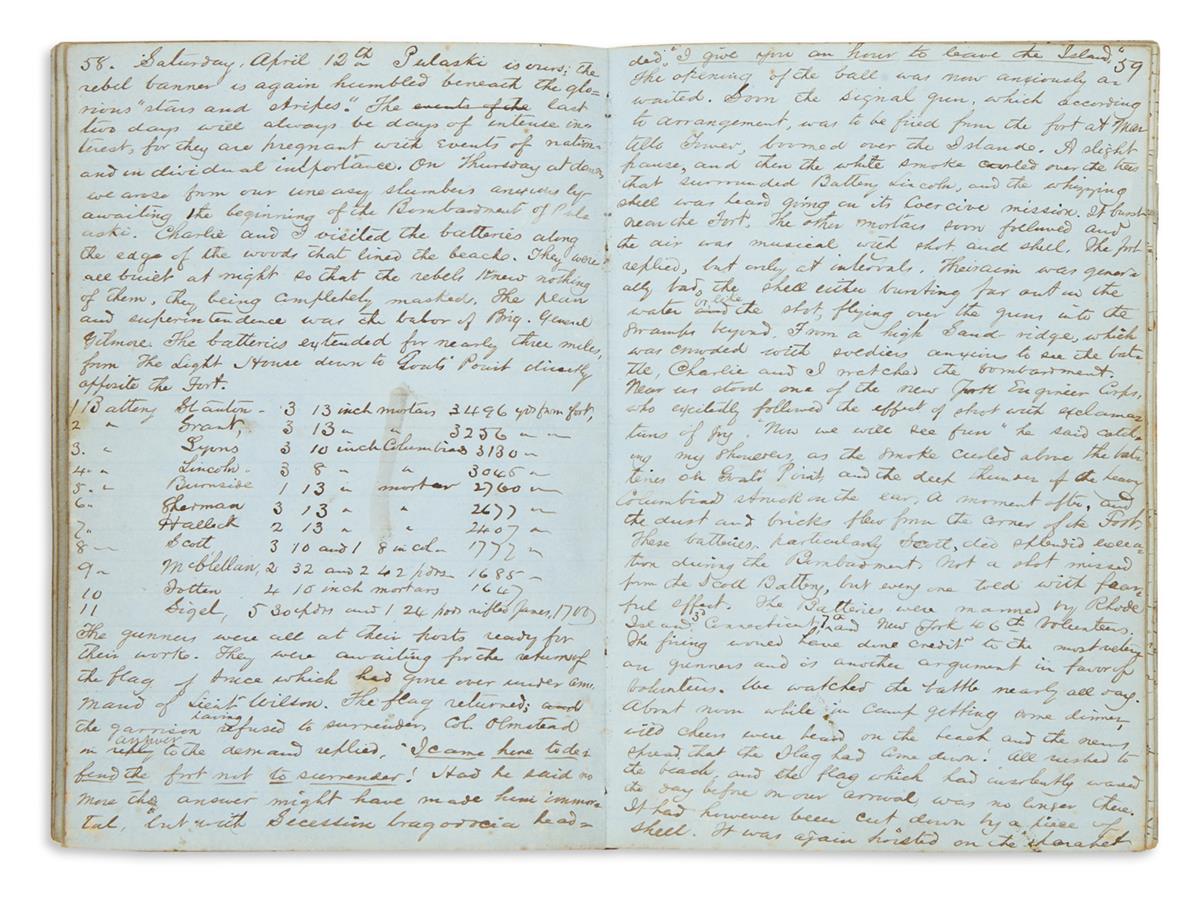