This extensive file documents a long and intense legal battle between local Indians and the owner of a hacienda, the Rancho del Ojo de Agua. The land was located in San Agustín de las Cuevas, now part of the borough of Tlalpan in Mexico City, although then it was under the jurisdiction of Coyoacán. The case was argued before the Audiencia in 1786. The Indian litigants from the nearby Barrio de Niño Jesús accused the latest owner of the Rancho, Juan José de Elías, of encroaching on their lands. To bolster their case, they brought forth a lavishly illustrated map of the Rancho and the surrounding communities, along with the original records of sales and transfers of land in the area dating back to the middle of the sixteenth century, all of which are included in the volume. More than a simple legal case file, this volume also provides a long-term view of the changes and transformations that took place within a central Mexican town over the colonial centuries.
The earliest documents are two Nahuatl cartas de venta or bills of sale from the 1560s attesting to sales of houses and land in San Agustín. See lot 318 above for similar documents. The first part of these documents is a written Nahuatl portion giving details about the transaction (in one case describing a possession ceremony in which rocks were thrown), and the second is an illustrated map of the property being sold employing Aztec glyphs and artistic conventions. The maps feature glyphs of hands, (maitl) and arrows (mitl), which were Aztec units of measurement. One of the cartas records the donation of a plot of land and its accompanying house by don Luis de Santa María Nanacacipactzin, the last member of the Aztec imperial dynasty to serve as governor of colonial Tenochtitlan. His signature appears on the document.
As the volume moves to the 17th century, the penetration of Spaniards into the area becomes apparent. As evinced by the documents collected here, Spaniards soon began to purchase land with increasing frequency, and Spanish haciendas soon appeared. Conflict over boundaries, however, did not emerge until the 1700s, when the Indians of San Agustín launched a series of successful lawsuits against the hacendados of the Rancho del Ojo de Agua. The Indians claimed the hacendados were unfairly incorporating their community lands into the Rancho.
The most intense (and perhaps definitive) of these suits was the one they filed against Juan José de Elías, the latest owner of the Rancho, in 1786. To get to the truth of the matter, the Audiencia sent Felipe de Zúñiga Ontiveros to measure and map San Agustín. As related in the court proceedings included in the volume, however, the local Indians rose up and violently prevented Zúñiga from carrying out his duty, perhaps believing that he would purposely misrepresent the community's borders. The Audiencia then had to issue a decree (included) ordering the indigenous governor to keep his constituents at bay so that Zúñiga could proceed in peace. He eventually did finish his work, and the result was a beautifully painted and intricate map included in the lot that registers every community and property.
Elías, in his defense, procured the favorable testimony (included) of several long-time residents in the area, some of whom were members of the elite. Among the most notable was Isidro Cano Moctezuma, a descendant of both a conquistador and the ill-fated Aztec Emperor whose name he bore. Cano claimed that he was once the mayordomo of the Rancho del Ojo de Agua and thus knew the local land quite well. Like the other witnesses, Cano averred that the Indians' claims were false, that the disputed territory belonged to Elías, and that he could show the judges in person the true boundaries. Such testimony must have swayed the judges of the Audiencia, as they decided in favor Elías. It is unknown whether the Indians of Barrio de Niño Jesús ever again challenged Elías, as the volume ends with his victory. A later plan from 1814 is laid in. 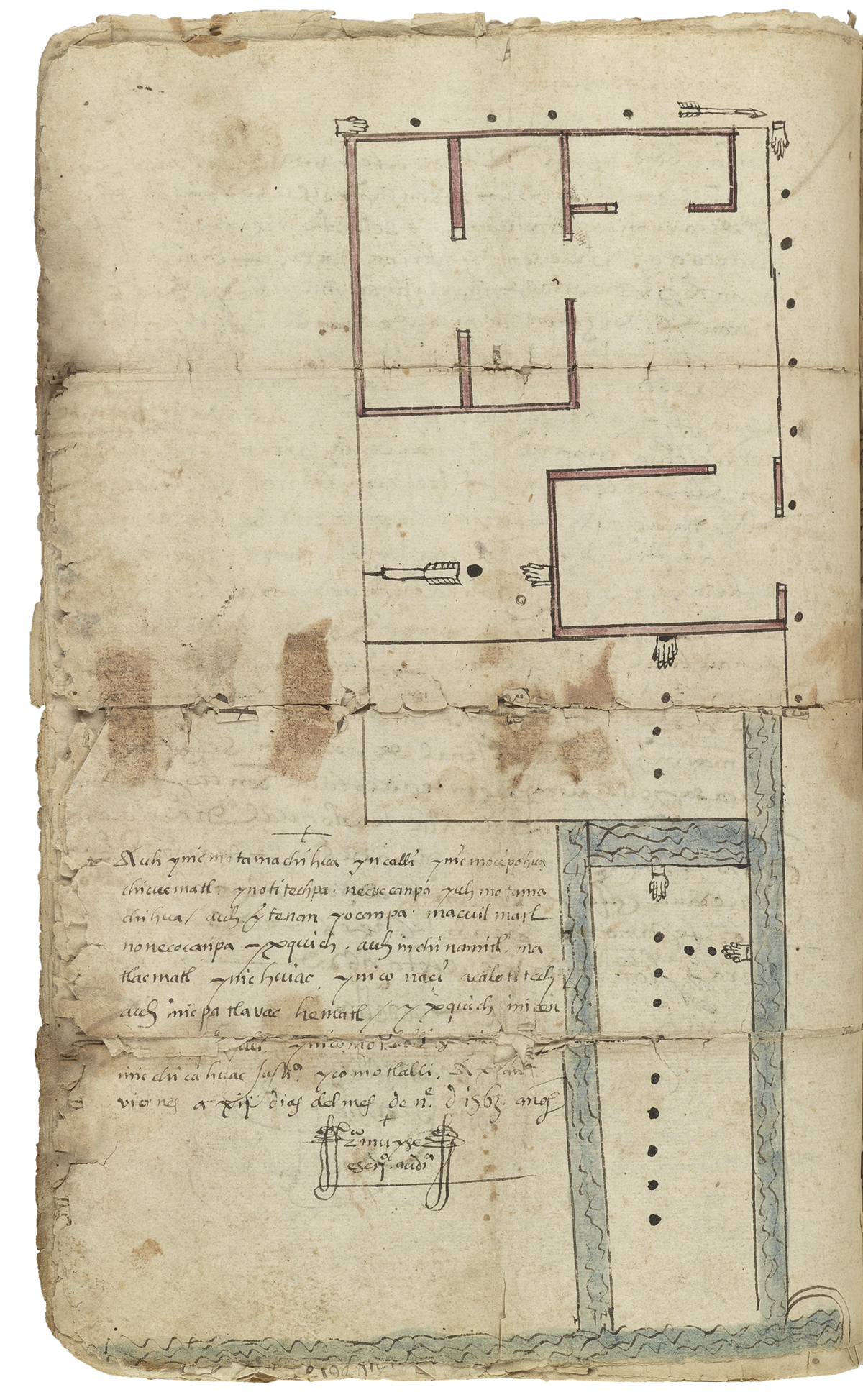 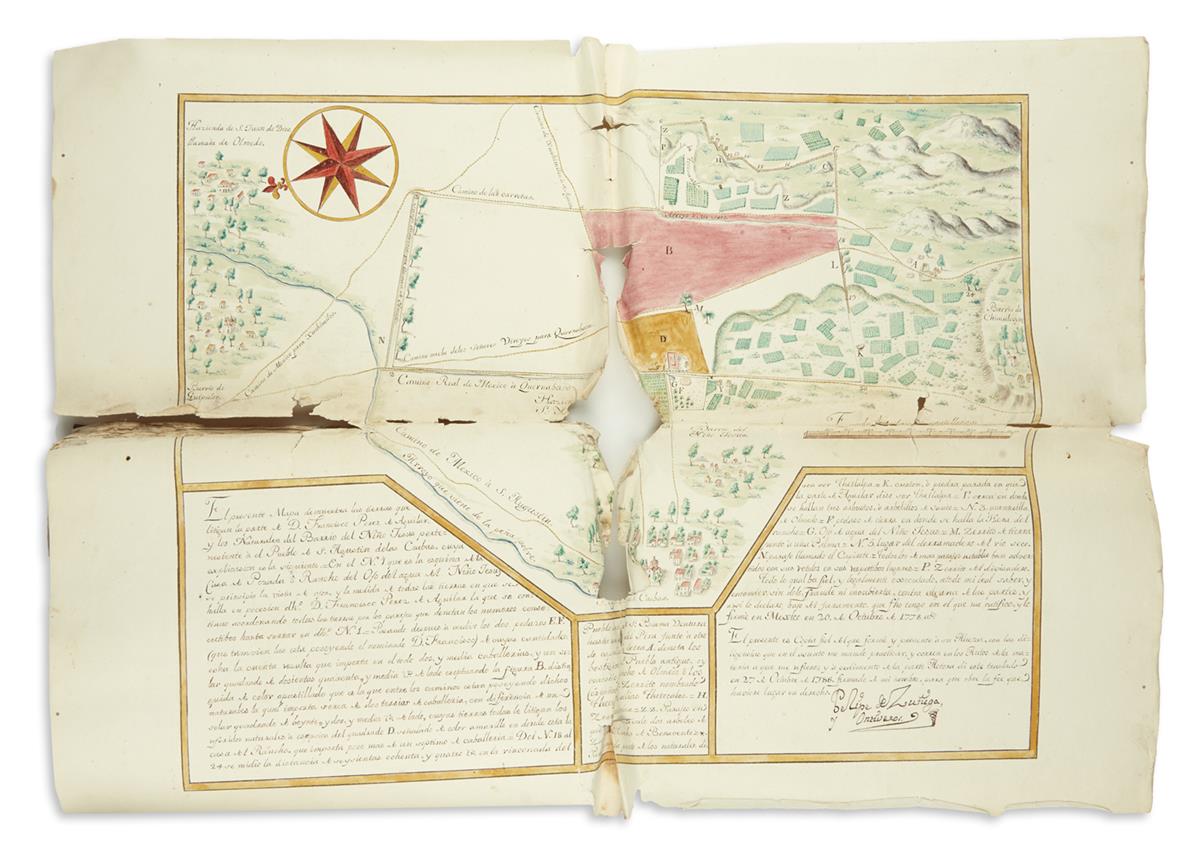