An extraordinary visual record of the U.S.'s remarkable space program, notably its halcyon days resulting in numerous "firsts," including the first American to orbit the Earth (John Glenn), the first spacewalk (Ed White), and the first man to step foot on the moon (Neil Armstrong), among others. The collection features images of heroic astronauts, scientists, and engineers associated with the numerous missions from 1961-1972, the first eleven years of manned missions. Highlights include photographs depicting liftoff, astronauts floating in space, Earthrise, capsules "rendezvousing," the dark side of the moon, and the lunar surface, including the moon walk and lunar rover.

The collector who compiled the archive was employed by a national picture agency. During this pre-digital period, more photographs were made available to news outlets than were required. Once the demand for images of an event diminished, excess photographic prints were typically destroyed. This collection contains press prints that were saved from destruction.

A complete video is available upon request.

BINDER 3, Manned Project Gemini Flights, Mission #3, #4, and #5,
Titan Missions #3
Starting the Gemini program, this spacecraft was the first to carry a computer for guidance and was powered by rocket. The manueverability of this craft led to the eventual rendezvous and docking of vehicles in space.
Gemini-Titan #4
This mission set a four-day endurance record. White made the first American spacewalk for 21 minutes.
Gemini-Titan #5
Cooper and Conrad set the world endurance record by spending 8 days in orbit. This proved that humans could survive in space long enough to travel to the moon and back.
A. Vigil "Gus" Grissom and John W. Young, Gemini 3, GT-3, Molly Brown, Launch Date March 23, 1965: Total: 56 photographs
B. James A. McDivitt and Edward H. White, Gemini 4, First Space Walk, Launch date June 3, 1965, Total: 82 photographs;
C. L. Gordon Cooper and Charles "Pete" Conrad, Gemini 5, Launch date August 21, 1965, Total: 61 photographs.

B. Frank A. Borman and James A. Lovell, Gemini 7, Launch Date December 4, 1965, Total: 71 photographs;
This mission set yet another endurance record of 13 days and made the first American rendezvous between two manned spacecraft with Gemini 6

C. Neil A. Armstrong and David R. Scott, Gemini #8, Launch Date March 16, 1966, Total: 75 photographs
Armstrong and Scott perform the first docking in space with another space vehicle, an Agena target rocket. The mission was prematurely terminated after only 10 hours and 41 minutes due to problems with a stuck thruster.

C. Charles "Pete" Conrad and Richard F. Gordon, Gemini 11, Lanuch date September 12, 1966, Total: 35 photographs
Gemini made the first American autopilot reentry and landing. A new record altitude was made of 850 miles (1360km). Gemini made a rendezvous and docking with a target Agena and Gordon made two spacewalks.


BINDER 6, Manned Apollo Missions #7 and #8
A. Walter M. Schirra, Jr., Donn F. Eisele, and R. Walter Cunningham, Apollo 7, Launch date October 11, 1968, Total: 83 photographs
The Apollo spacecraft makes its first flight as the astronauts perform several tests during its 11 days in orbit. The first live television pictures from space occurs on this mission.
B. Frank A. Borman, James A. Lovell, and William A. Anders, Apollo 8. Launch date December 21, 1968, Total: 95 photographs
This Saturn 5 rocket sent the astronauts to the far side of the moon, a first in manned flight. They made ten orbits around the moon on this most powerful rocket ever used in manned flight.

B. Thomas P. Stafford, John W. Young, and Eugene A. Cernan, Apollo 10, Launch date May 18, 1969, Total: 67 photographs;
This mission was a dress rehearsal for a lunar landing. The lunar module came within 10 miles of the surface of the moon and took photographs of the Apollo 11 landing site.


BINDER 8, Manned Apollo Missions #11, #12 and #13
A. Neil A. Armstrong, Edwin E. "Buzz" Aldrin, and Michael Collins, Apollo 11, Launch date July 16, 1969: Total: 67 photographs;
Apollo 11 successfully completed the first manned mission to the lunar surface. At 10:56am on July 20, Neil Armstrong became the first human to walk on the moon, joined 18 minutes by Aldrin. Armstrong and Aldrin remained on the surface for 20 hours and took a two-hour moonwalk.

B. Charles "Pete" Conrad, Richard F. Gordon, Jr. and Alan L. Bean, Apollo 12, Launch date November 14, 1969, Total: 62 photographs;
Apollo 12 made the second landing on the moon. Conrad and Bean collected 31 kilograms of lunar rock and soil, and retrieved parts of the unmanned Surveyor 3 spacecraft.
The third manned lunar landing was aborted due to an explosion aboard the command module on April 13. Lovell, Swigert, and Haise used the lunar module as a lifeboat. Through the heroic work of the astronauts and ground engineers, the spacecraft and crew returned safely to Earth.

A Alan B. Shepard, Jr., Stuart A. Roosa, and Edgar D. Mitchell, Apollo 14, Launch date January 31, 1971, Total: 79 photographs;
Apollo 14 was the third successful lunar landing mission. This mission was the first to use a tool cart on the moon, for the collection of more rock and soil samples. 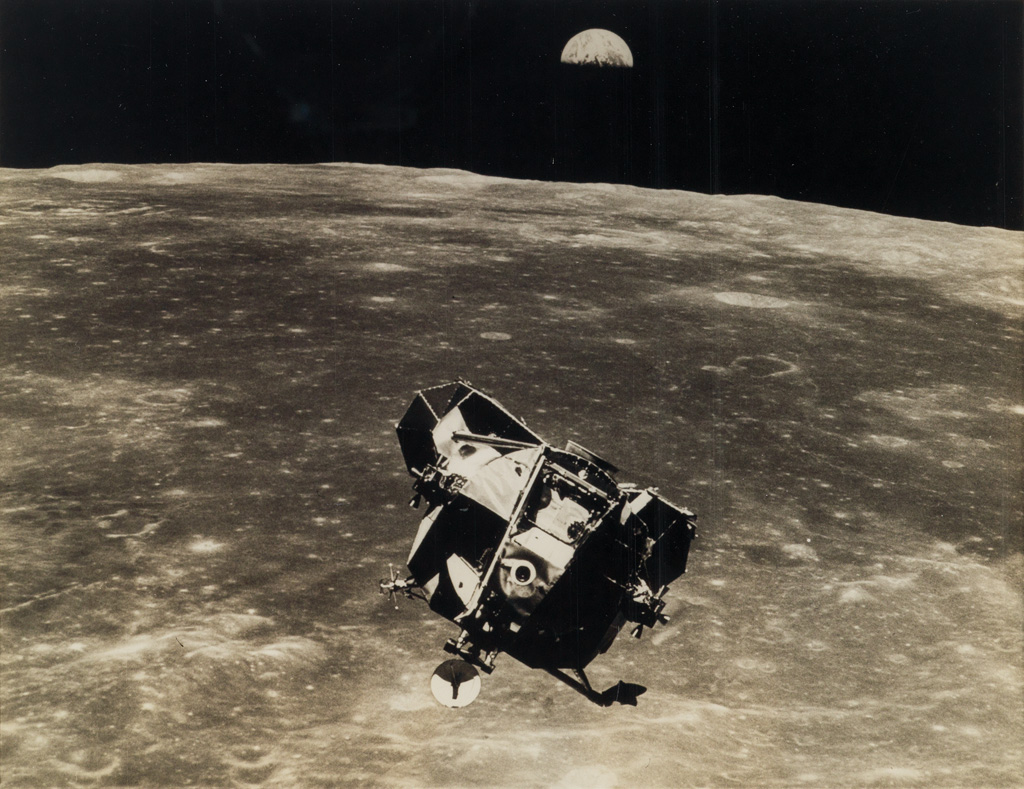 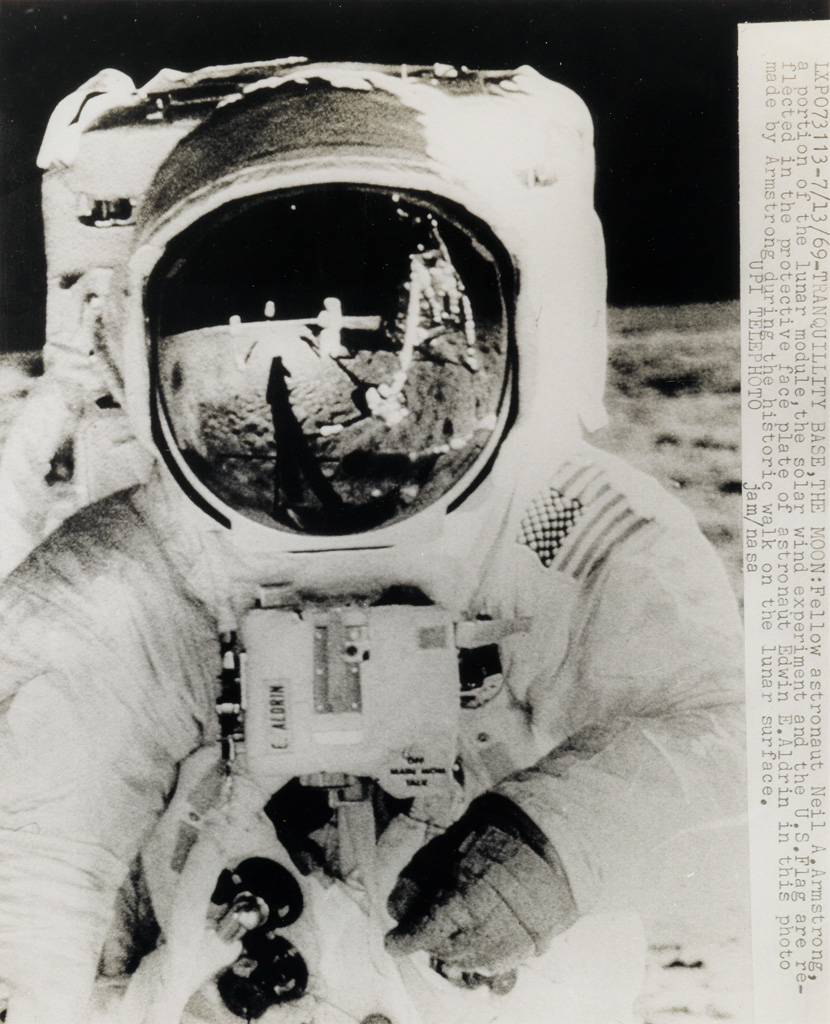