This period portrait of Abraham Lincoln is not signed, but is believed to be one of the lost portraits by John C. Wolfe. It bears a close resemblance to a photograph by Joseph Hill of Springfield taken in June 1860 (Ostendorf O-25). During these hectic months following his May nomination, Lincoln was avidly sought after by portrait painters, but proved to be a difficult sitter. He told another painter during this period, "They want my head, do they? Well, if you can get it you may have it; that is, if you are able to take it off while I am on the jump." Artists often found the need to supplement their observations with photographic references. An early owner of this painting assumed that it was a photograph which had been heavily retouched. However, careful examination under x-ray by the staff of the Metropolitan Museum of Art reveals that it is an original painting on board; the Hill photograph was only used as a reference. The artist was evidently in a great rush; the bare canvas was used as a highlighting technique.
For many decades, one of the most sought-after lost portraits of Lincoln was by the obscure artist J.C. Wolfe. The Illinois State Journal of 4 August 1860 reported that Wolfe's finished painting "may be seen at his rooms in Foster's Building on Fifth Street." An article in the Daily Capital of Topeka KS (2 February 1881) stated "As long ago as 1860, Prof. Wolfe painted a portrait from sittings of the honored Abraham Lincoln, and a testimonial signed by O.M. Hatch, the Secretary of State, Dubois, Ben Butler, and other state officers, and endorsed by Lincoln himself, to the effect that it was the most truthful likeness of Mr. Lincoln that they had ever seen, was given to the professor, and after Mr. Lincoln's death, Prof. Wolfe received and filled thirty orders for copies of the portrait from the dead president's friends." Because Wolfe did not generally sign his works, this portrait remained unknown until 2005.
John C. Wolfe (1817-1891) was the definition of an itinerant artist. Born in England, he can be traced through census records and city directories to at least 12 different towns, mostly in the American Midwest. He apparently began his American career in Cincinnati in the 1840s, where he did a popular panorama of Milton's Paradise Lost. The 1850 census finds him in a boarding house in Sycamore, OH, listed as an artist. In 1855, he was in Auburn, NY. The Springfield, IL city directory for 1860 has only two entries for portrait painters, both of them apparently the same man: J.C. Wolf, whose studio was at 5th Street between Monroe and the public square; and "J.C. Waiefe" (which certainly looks like a typographical error), who boarded at Maxcy House. J.C. Wolf appears in the census as an artist in Galesburg, IL in July 1860, and in the same town's 1861 city directory, as well as the 1861 directory for nearby Peoria as a "portrait and landscape painter." John C. or J.C. Wolfe appears several other towns as an artist or portrait painter over the next few years: 1864 in Richmond, IN; 1866 and 1868 in Dayton, OH; 1870 in Peru, IN (per the census); 1877 in St. Louis, MO; 1878 in Kansas City, MO; 1880 in Topeka, KS (per the census), where he produced a portrait of John Brown for the State of Kansas in 1881; and 1882 in Chattanooga, TN. One source claims that he returned to England before his death in 1891.
An unsigned portrait very similar to the present example (but somewhat larger) was handled by Daniel Weinberg of the Abraham Lincoln Bookshop in 2004 (catalogue 155), which he attributed to Wolfe. Holzer wrote an article on this earlier discovery, "Lincoln Heard and Seen—a Crucial Letter and Life Portrait Finally Surface," in American Heritage 56:1 (February-March 2005). The present portrait, identical in pose to the first, was offered at the auction of the Lloyd Ostendorf Collection of Lincolniana in 2004, where is was incorrectly described as a retouched photograph. Weinberg purchased it for sale to Holzer. Whether this portrait was Wolfe's August 1860 original, or one of his later copies produced after the assassination, may be impossible to determine.
Provenance: owned by Lincoln collector George A. Zeller (1858-1938), who loaned it to an Illinois court house; famed collector and researcher Lloyd Ostendorf, who had the painting restored in 1970 and appraised in 1994; Bonham & Butterfield's Ostendorf sale, 23 November 2004, lot 9026, to the Abraham Lincoln Book Shop and thence to the consignor. 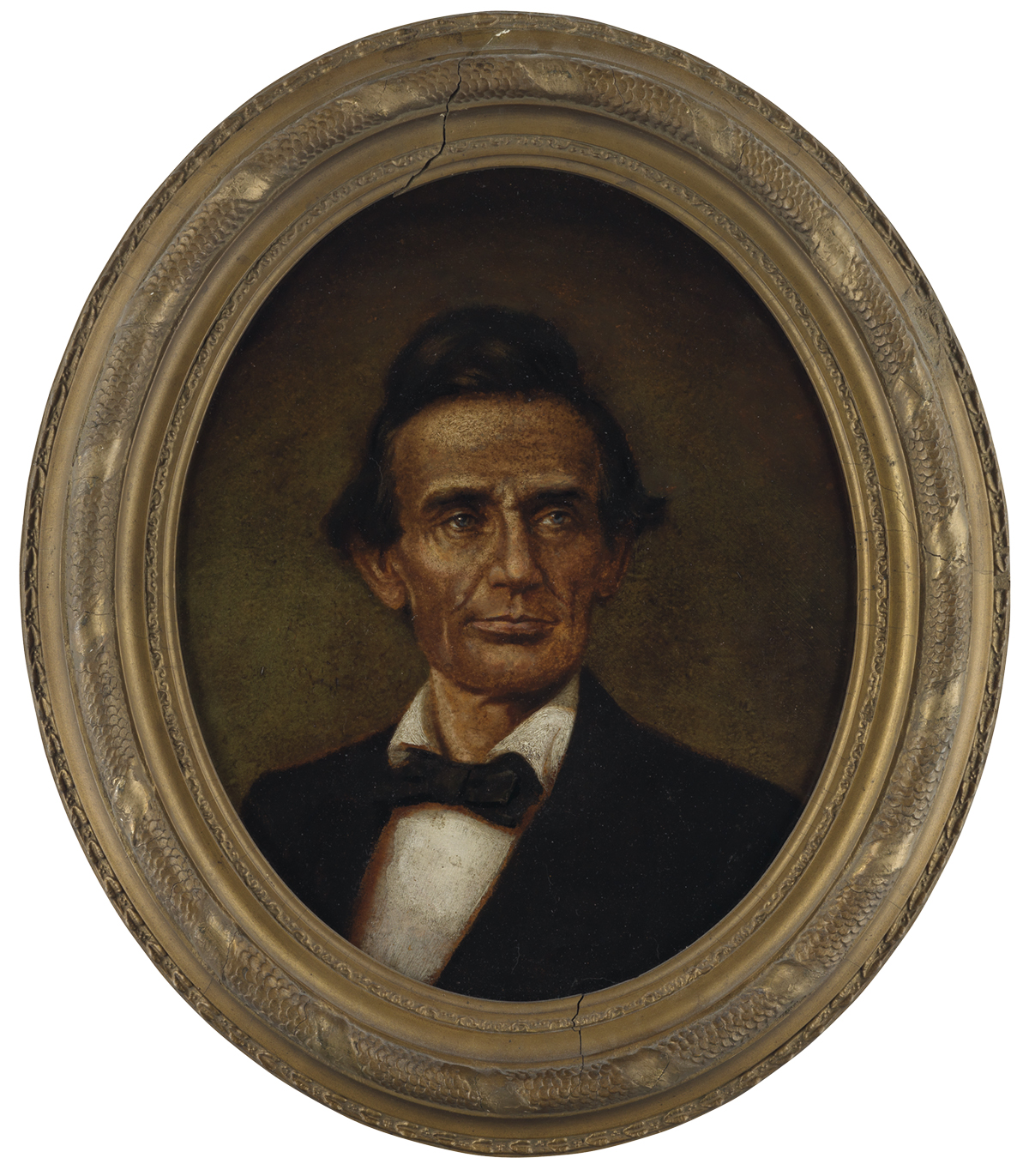