This scene was originally engraved in 1852 to celebrate the Compromise of 1850. Demand for that print was undoubtedly minimal by 1861, but the owner of the plate saw the opportunity to update it for the onset of the Civil War. Several of the faces in the original were replaced with important Union figures. Most importantly, a beardless Lincoln's head was transplanted atop John Calhoun's body. Edward Everett, William Seward, and Benjamin Butler replaced other southern figures, and the disgraced former president James Buchanan was replaced by Major Robert Anderson, who came to fame as commander of Fort Sumter in April 1861. The unknown engraver who handled this revision chose not to swap out the portrait of Henry Clay, who had been dead for nine years; Lincoln had famously called Clay his "beau ideal of a statesman" during a 1858 debate with Douglas. Conveniently, there was no need to change the simple "Union" title, which now assumed a new resonance. At some point after the print was issued with the beardless Lincoln, it was recycled once more, adding a beard to Lincoln's face as seen in the next example. "Steel plates endure, but politics change rapidly"--Lincoln Image, pages 68-69.
Offered here are two versions of "Union" and two versions of the accompanying "Key to the Union." First is the 1852 first state of "Key to the Union," which does not list Lincoln as one of the subjects. #8 is given here as John Calhoun. 5 1/2 x 12 3/4 inches, quite worn with substantial loss on all 4 edges and a long closed tear.
Next is the second state of "Union," the full mezzotint engraving, 22 3/4 x 29 1/4 inches; moderate foxing, minor dampstaining and wear, with Lincoln in place of Calhoun, New York: William Pate, ©1852 but 1860. It is accompanied by the second state of "Key to the Union," naming the 23 figures including "Abraham Lincoln of Ill." Engraving, 8 3/4 x 11 1/2 inches; moderate foxing. New York: William Pate, [1860].
The lot concludes with the third and final state of "Union," adding a beard to Lincoln's face, but leaving the long-deceased Henry Clay in the chair near the center of the composition. Mezzotint engraving, 25 x 32 1/4 inches; minor foxing and wear, very faint dampstain visible mainly on verso. New York: William Pate, circa 1861-65. 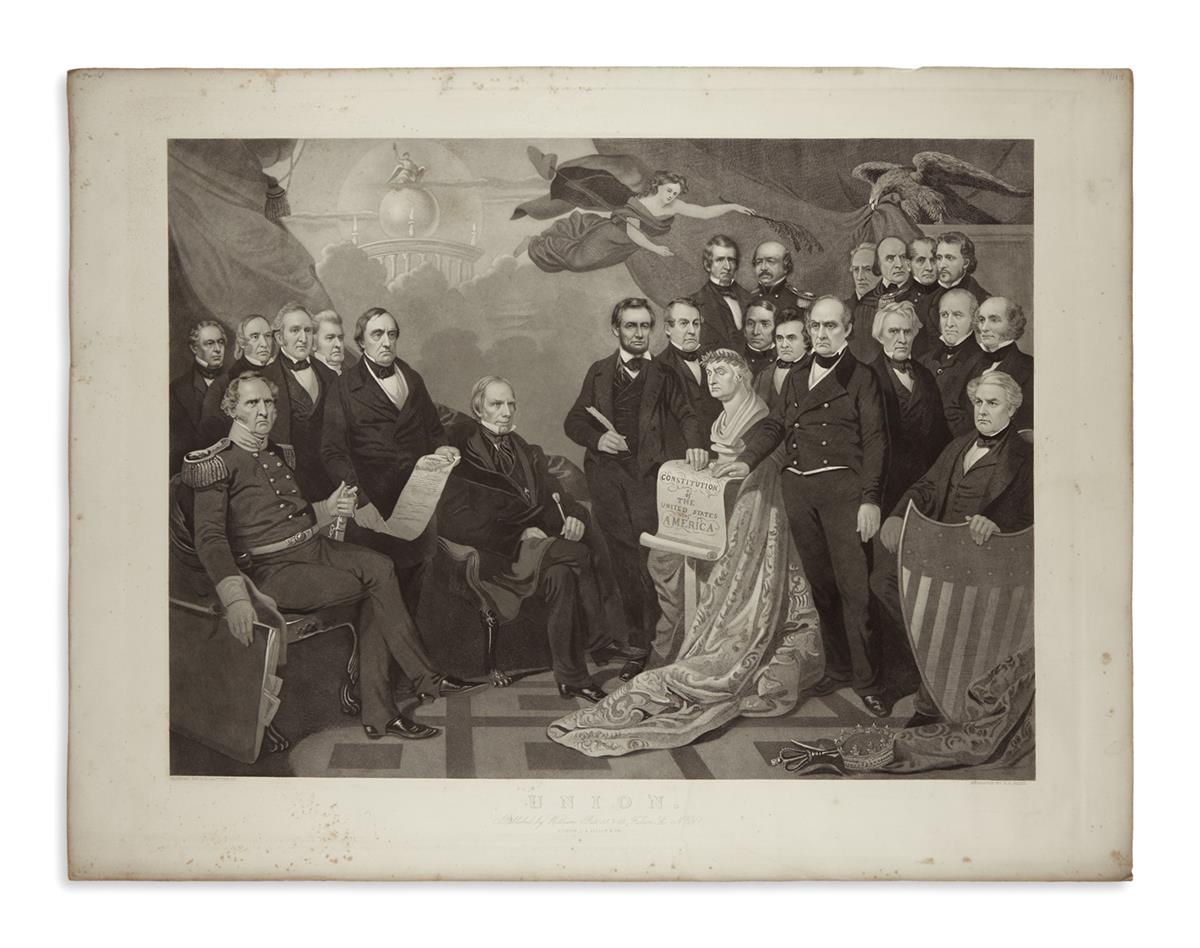