Price Realized: $ 38,000
Price Realized: $ 47,500
Show Hammer Price?Final Price Realized includes Buyer’s Premium added to Hammer Price
Estimate: $ 30,000 - $ 40,000
"WE ALL EXPECTED TO HAVE OUR SCALPS GRACE THE WIGWAMS OF THE APACHES" (TEXAS.) Smith, William Farrar. Manuscript diary of an expedition to blaze a trail from San Antonio to El Paso. A few small pencil illustrations. 216 manuscript pages, titled "Journal of My First Trip in the Indian Country of Texas" on the front free endpaper and headed "Private Notes of the Reconnaisance from San Antonio to El Paso del Norte and Back." 12mo, original calf, lacking backstrip, worn; contents loosening, some scattered smudging, mostly clean and legible; signed on front free endpaper. Various locations in Texas, February to May 1849
Set Alert for Similar Items

This is the original manuscript journal of William Farrar Smith (1824-1903), recording his time on the Whiting-Smith Expedition in search of a passable wagon route along the Rio Grande between San Antonio and El Paso. Smith, a West Point graduate, was in Texas with the Corps of Engineers, working to establish the new boundary between the United States and Mexico. He partnered with fellow Army engineer William H.C. Whiting on the exploratory mission, accompanied by a small group of experienced frontiersmen. The road pioneered by the expedition was heavily used in later years by the army, stage coaches, and settlers traveling across the Southwest.
The expedition left San Antonio on 12 February 1849, traveling north to Fredericksburg. They proceeded across the Llano and the Pecos rivers toward the Rio Grande. They arrived at Fort Leaton, near Presidio del Norte, on 24 March, and then arrived at El Paso on 12 April. They returned via a different route in order to compare the two, traveling up the Rio Grande for 120 miles before turning east to the Pecos. Smith's diary begins on 12 February when the expedition sets out, and continues through to 18 May, shortly before their return to San Antonio. He provides detailed observations on the geology and natural features of the region, describing the scenery, the rock formations, the hunting, the local Mexicans, and the lack of water faced by the expedition.
The march was interrupted on more than one occasion by the appearance of Indians. This being an actual expedition and not a movie, the Indians were not "hostiles" or "friendlies," but were definitely suspicious of the interlopers. The most intense encounter was with a band led by the widely feared Apache chief Gómez: "Seeing two or three clouds of dust, took them to be antelopes but a short distance farther on & we were undeceived, for our antelopes changed to cattle driven by veritable Apaches. On looking back to the train to point them out we saw warriors coming up rapidly behind our men and before they could be warned about 20 had come up with them & by the time we had joined them, we were surrounded though not by such numbers as to give us much uneasiness, though we had a bad position & men on mules. As they kept coming up from all quarters we began to think of backing off to the hill side & giving them a talk. But this we found no easy matter as they were aware of the advantage they had & appeared determined to keep it. They inquired who we were, where we were going & why we had put out fires. . . . Sol & Dick kept up a conversation with our friends while we tied our mules as well as possible & prepared for a fight. The Mexican chief Gomez appeared anxious for a fight, but old Green Shirt was more disposed to act the friend. . . . We made up our beds on the small stones expecting to be jumped before the night was over. A blue day we have had & at one time we all expected to have our scalps grace the wigwams of the Apaches" (17 March).
The diary is full of detail on an arduous march through hostile terrain: "The road today passes through pretty heavy mesquital and our rate has been slow. Provisions low & no game. We have left the timber behind us for awhile" (4 March). The expedition's time in El Paso offers a pleasant contrast to the march, however: "After supper three of us crossed over to see the famed El Paso del Norte. The town was prettily laid out & the trees & gardens shamed the mud houses & walls. We visited the house of Mr. [Rufus?] Doane, who treated us as well as possible. Dick & myself, after drinking enough of the Paso wine to acquire a taste for it, slept three in a bed in the house of a namesake of his. . . . Went to the ball at Lyle's, I bettering my appearance only by a borrowed white shirt. Danced once with the woman I fell in love with & helped to drink up all the wine & then slept in the groom's house" (12-14 April).
Another Indian encounter took place on the return journey: "Descried Indians upon the slopes of the table hill directly in front of us. As two or three were coming towards us & the number in sight constantly increasing, we concluded to be on the safe side & tie our animals; so closing in to the creek under a low limestone hill the men secured their mules. Dick was some distance in front and by this time had half a dozen round him & Jack Hunter, Harry Love & myself rode out & formed there to make things more even handed if necessary & Whiting soon after came out on his mare while in the mean time the Indians numbered eleven. They turned to be Lepons [Lipan Apaches] & friendly disposed" (5 May). His final entry on 18 May records that the mules had all stampeded in the middle of the night, leaving the party stranded afoot.
Smith's co-commander Whiting also kept a diary of the expedition. A published version appears in Vol. IX, No. 6 of the Publications of the Southern History Association (November 1905). However, Whiting's diary ends in mid-April as the party prepares to leave El Paso, making the present diary by Smith a fuller and more extensive account of the trip by a whole month. Smith concludes that the route taken on the return journey from El Paso to San Antonio is superior to that taken on the way west--of particular note because the published Whiting journal does not record any of the details of that route. This diary, however, is much more than a document of an important expedition. It is a true Wild West saga, set several decades before the saloons and sheriffs of the more civilized "wild west" which followed. More extensive notes are available upon request. 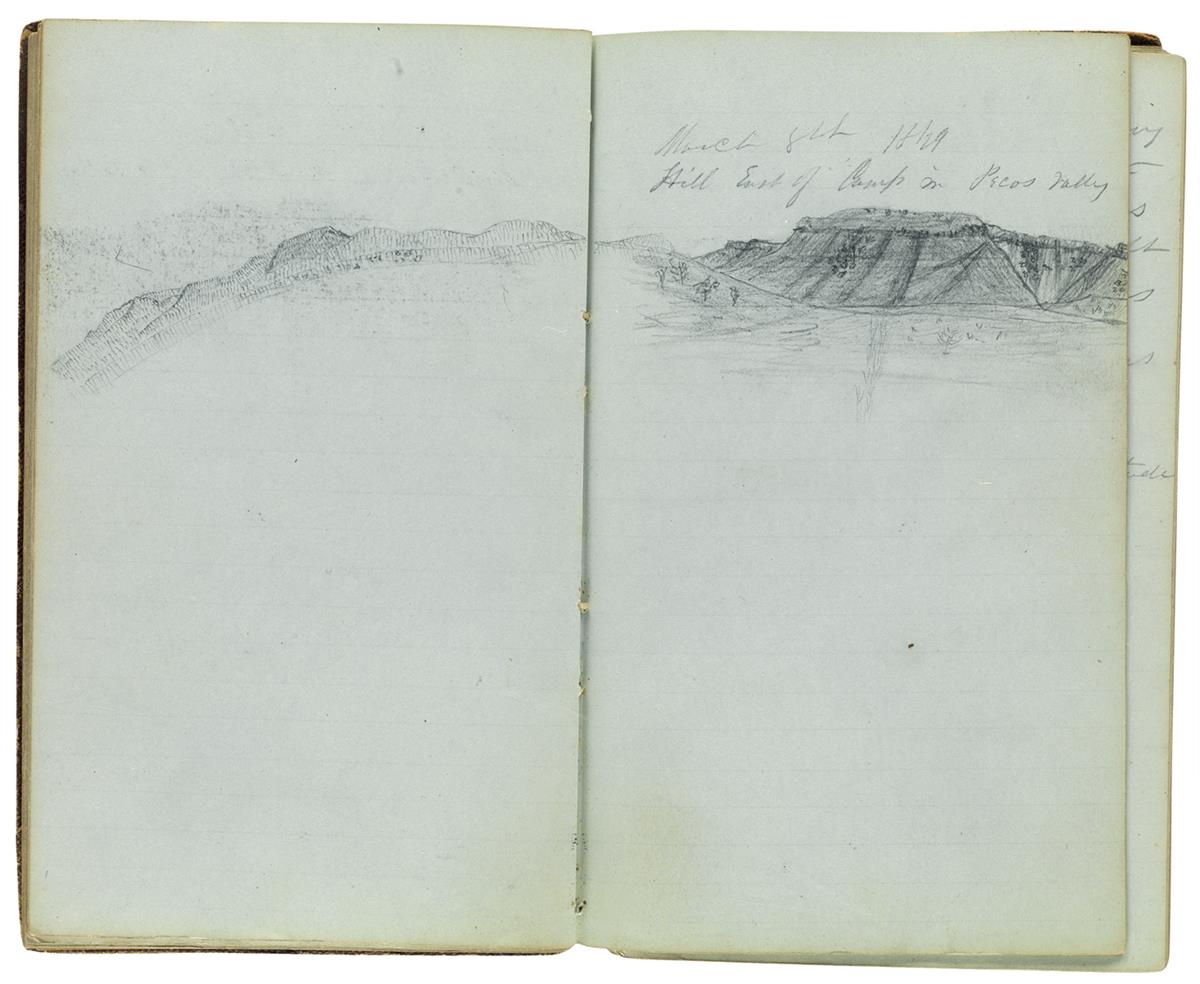