Spanning the years 1938 to 1954, the present journals are the remarkable survival of a Japanese war-time perspective told by a young man named Nishigori. Begun at just 12 years old, Nishigori continues to record and draw in his personal diaries until the age of 28. Through his eyes we witness intimate reflections on the Second Sino-Japanese war, World War II, family relationships, his Christian religion, and nationalism and pride for his country. As time progresses towards the end of the War, Nishigori grows pessimistic as American bombers attack the islands of Japan, culminating in the destruction of Hiroshima and Nagasaki. In the wake of the war, Nishigori turns deeper into his Christian beliefs, questioning the morality of war. One of the later diaries is written almost entirely in English and shows the young man's attempt to build a new life out of the ashes of struggle. The archive is moving, beautifully kept, and signifies a wealth of research value.

part one: The War.

Diary 2, Showa 14 (1939): Brief writings about family and school, with bits of information on the war in China. Nishigori is 13 years old.

Diary 3, Showa 15 (1940): A photograph of a smiling Nishigori perched in a tree appears on the front cover. Cartoonish drawings and other photos including a portrait of his older brother and a small piece of coral collected from the beach are tipped in. There is some talk of the fighting in China. Nishigori is 14.

Diary 4, Showa 15 & 16 (1940-1941): Newsprint clippings including maps and warships are tipped in; entries pertain to Pearl Harbor, Singapore, and the start of the Pacific war with mentions of Hitler and Mussolini. Nishigori, now 15 years old, writes with pride about being Japanese.

Diary 5, Showa 17 (1942): Mention of his older brother now in China; a cartoon of the Doolittle Raid and others with Hitler, Hideki Tojo, Mussolini, Churchill (with "Jew" in Japanese next to him), Stalin, Roosevelt, and Chiang Kai-Shek appear as well as a view of Osaka and maps of Singapore and the Manchurian Railroad (where his brother was working). Other entries include fighting in Burma, Corregidor. Nishigori is 16 and is becoming excited by the war.

Diary 6, Showa 17 (1942): Mentions fighting in the Aleutians, Battle of Midway, Burma, Dutch Harbor, the sinking of the Hornet and Enterprise, news of India. Nishigori writes proudly of the victories won by the Imperial Army and Navy. Many postcards sent from his older brother in China are tipped in.

Diary 7, Showa 18 (1943): A self-portrait and additional interesting cartoons appear including Japan attacking U.S. warships and an unusual scene of a Freemason ceremony. Nishigori writes that he is still confident Japan can defeat the U.S. and discusses the recent government draft of non-science and non-engineering students. His older brother writes that it will be more difficult for him to send postcards from China. Now 17 years old.

Diary 8, Showa 18-19 (1943-1944): Self-portrait of Nishigori on the cover with industrial war factories below. He is now studying science at university and mentions he will have to keep his grades up to avoid being drafted. He is now 17-18.

Diary 9, Showa 19 (1944): News and sketches of U.S. B29 bombings and new secret weapons in Germany. He is now 18 and becoming increasingly pessimistic of the war.

Diary 10, Showa 20 (1945): At 19 Nishigori is drafted; however, the war will soon be coming to an end. Entries include the American invasion of Okinawa, deaths of Roosevelt, Hitler, and Mussolini, and concluding with the atomic bombs being dropped on Hiroshima and Nagasaki (with haunting sketches of the devastation). The war ends.

part two: The Occupation and reckoning.

Diary 1 "A", Showa 20-21 (1945-1946): Nishigori's brother returns from China. MacArthur arrives in Japan and the Occupation begins. Nishigori writes of food shortages, inflation, and the kindness of Americans. He begins to go to church on a regular basis and becomes increasingly anti-war. He is now 19-20 years old.

Diary 2 "B", Showa 21-22 (1946-1947): A large portion of this volume is written in English, with much writing on religion and morality. Nishigori describes the arrival of US troops: "All of them had wearing the good uniform and beautiful military cap." Entry of November 3, 1946: "In this new constitution Japanese declared with solemnity to the world, that to establish a democratic and peaceful nation with no army. It's a very solemn declaration and all the nations must remember today forever."

Diary 3, Showa 22 (1947): Nishigori is now 21 years old. Many entries concerning Christianity, morality, and religion. "I see the need of the Japanese people. The Lord showed me the way in prison" he writes in English accompanying one of his sketches.

Diary 5, Showa 25-29 (1950-1954): Culminating in the final years of the Occupation and shortly thereafter, Nishigori is a mature young man with a bright future ahead of him. One of the final pieces of artwork is a superb double-page antiwar drawing. Nishigori's diaries conclude at the age of 28. 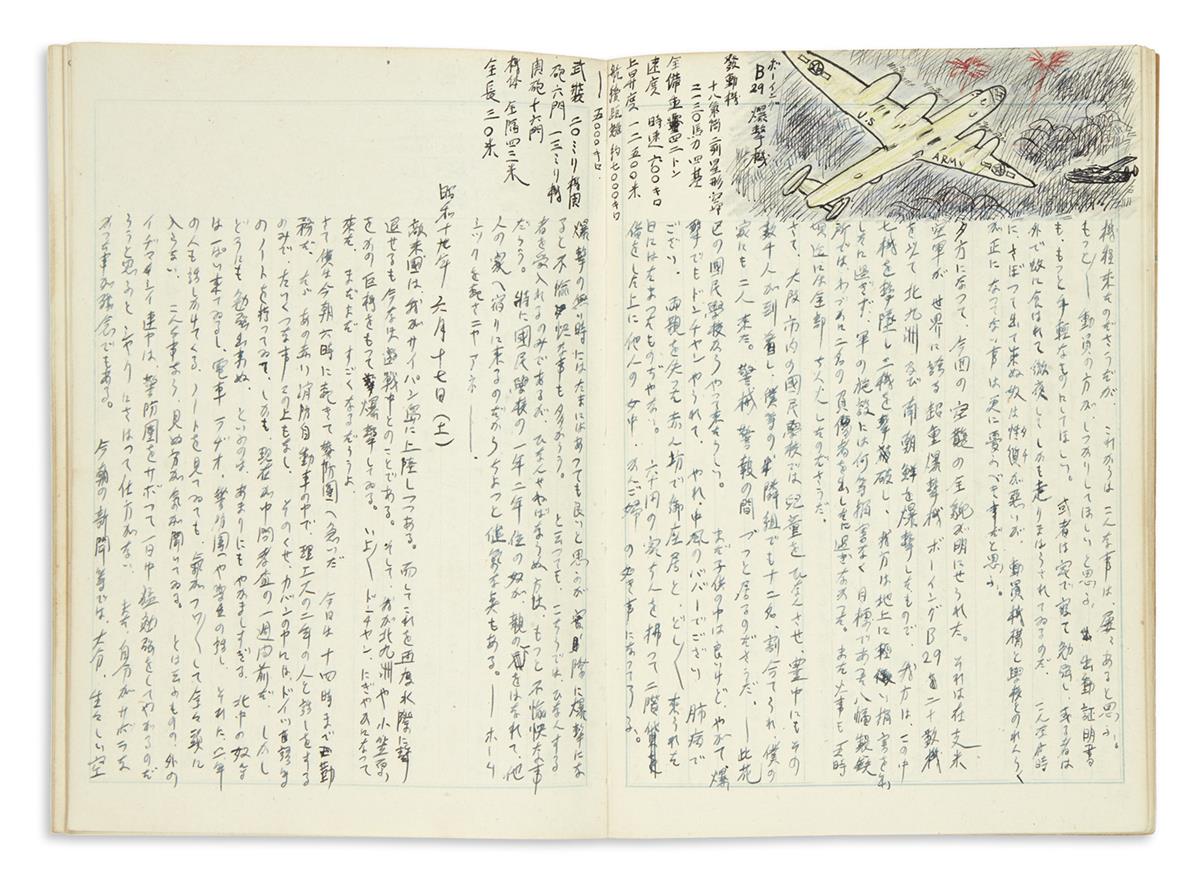