Provenance: Private collection, New York. With the printed label of Warner, Picture Frames, Rockville, CT, the artist's home town, on the frame back. Acc
ording to Mrs. Ardis Abbott at the Vernon Historical Society, framer L. B. Warner was listed in the Rockville city directory in 1879 and 1881. We thank Hildy Cummings, noted Porter expert and author of a forthcoming catalogue raisonné, for her expertise in confirming this work.

This is a lovely, early example of the artist's still life painting from the 1870s, before he moved to Paris in 1881. Born in Hartford, Connecticut, Charles Ethan Porter was a noted still life and floral painter of the 19th century. Porter was active from 1865 to 1915, both in New York and Hartford. In 1869, he was one of the first African-Americans to study at the National Academy in New York. He later settled in Hartford where he befriended his neighbor Mark Twain. Around 1881, after raising $1000 from auctioning his paintings, Porter moved to Paris. Correspondence establishes that Mark Twain supported his studies. He returned to Connecticut in 1884. Porter's paintings are in the collections of the Wadsworth Atheneum, Hartford, and the Whitney Museum of American Art, New York. Henderson and Bearden, p. 112....
Show More
Set Alert for Similar Items 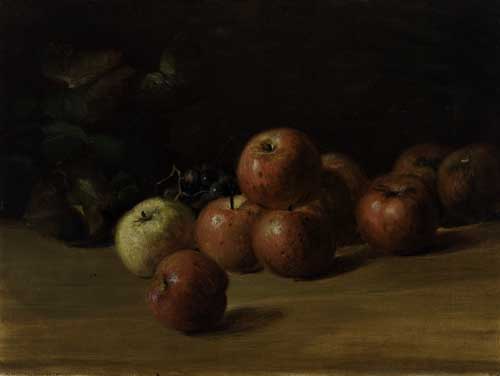