Etching on wove paper, 1922. 200x250 mm; 8x10 inches, full margins. Edition of approximately 100. Signed in pencil, lower right. A brilliant, richly-inked and early impression with very strong contrasts and no sign of wear. With ink-ghosting from an impression of Hopper's Locomotive, etching, 1923 (Zigrosser 17) on the verso.

Hopper (1882-1967) was born in Nyack, New York, just north of New York City. After briefly studying at the Correspondence School of Illustrating (1899-1900), he attended the New School of Art from 1900 to 1906. Hopper studied painting and life drawing under Kenneth Hayes Miller, Robert Henri and William Merritt Chase alongside classmates George Bellows, Guy Pène du Bois and Rockwell Kent. At 24 years old, Hopper traveled to Paris, where he stayed for over a year (he returned to Europe again in 1909 and 1910). These European trips were crucial to his development as an artist, and even though he never returned to Paris, he portrayed a romanticized ideal of the place in many of his works until 1924, at which time he ceased using overt French imagery altogether. While many American artists who visited Paris during this time were most struck by the avant-garde movements of Fauvism and Cubism, Hopper paid them little attention and instead studied Edgar Degas and Édouard Manet, as well as Rembrandt van Rijn and other Old Masters.

Hopper chose not to characterize himself as an illustrator or printmaker, preferring to be known as a painter, but ironically he found commercial success and a livelihood through both of these downplayed endeavors. Hopper began working as an illustrator in 1905 with C. C. Phillips & Company, New York, and supplemented his income through illustration work through the early 1900s. He did not find sound financial footing through sales of his paintings until after 1924, following a sold out exhibition of his work, at Rehn Gallery, New York.

Hopper's first foray into printmaking came at the encouragement of then-fellow illustrator Martin Lewis, in 1915 (see lots 176-191), who instructed him on the technical aspects of the medium. Despite receiving this initial instruction on printmaking from Lewis, their styles were markedly different: Lewis employed a variety of complicated techniques to obtain his desired tonal effects, while Hopper had a more direct approach, only ever working in etching and drypoint; Lewis focused on printmaking throughout his artistic career, while Hopper produced approximately 70 prints over a relatively short period of time. His career as an etcher was particularly short-lived and essentially ended in 1923; in 1928, he made his final prints, two drypoints, before abandoning printmaking altogether to focus on painting.

Hopper quickly mastered etching and drypoint. He had a relatively simple and steadfast preference when it came to printmaking: very black ink on very white paper; plates that were deeply bitten and clean-wiped, producing impressions that came out inky with brilliant contrasts. While creating seemingly straightforward, realist compositions, Hopper imbued his scenes with mood and emotion, aptly capturing the intangible quality of a fleeting moment. His work is characterized by a sense of stillness and isolation, which he often dramatized with the use of heavy chiaroscuro and strong, dark hatching, such as in East Side Interior, one of his most celebrated etchings. The image of a lone woman before a window appears repeatedly in his oeuvre, and is an arrangement employed by one of his greatly-admired artistic influences, Degas. Windows crop up frequently in Hopper's work as symbols of the contrast between quiet interior moments and the busy outside world. Psychologically, Hopper's figures are often caught in moments of contemplation or seeming boredom--scenes of stillness indicative of loneliness and weariness. Zigrosser 85; Levin 85.
Set Alert for Similar Items 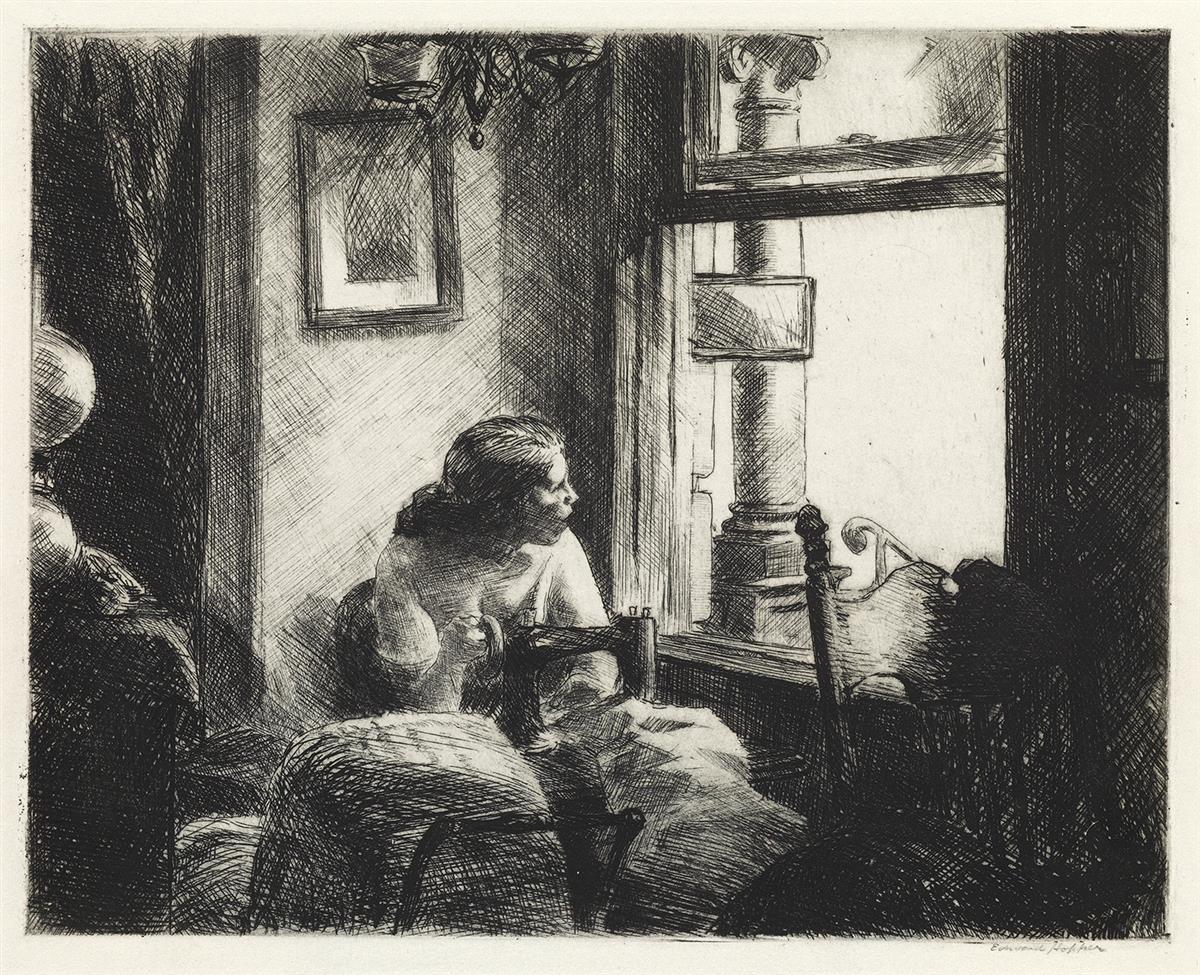