Like many artists in Paris during the 1930s, the Hungarian painter Gabor Peterdi (1915-2001) learned of Atelier 17 through colleagues, Szenes and Maria Helena Vierira da Silva at the Academie Julien and Academie Scandinavien, and by 1933 had joined the workshop. There, under the direction of Hayter, Peterdi became enchanted with the copperplate and burin, developing an intimacy with engraving and a fondness for its many techniques and qualities that he would not relinquish his entire career. (His Printmaking: Methods Old and New, published in 1959, remains a standard text for both printmaking students and professionals.)

After immigrating to the United States in 1939 and serving 7 years in the army during World War II, Peterdi resumed his printmaking activity at Atelier 17 in New York. His prints produced shortly after his military service, including the present lot, reflect the spiritual devastation and suffering of war, in which even the horse and rider, a not uncommon subject in the Surrealist art of Dalí and Picasso, appear under attack by the very beasts that they hunt. Johnson 33.
Set Alert for Similar Items 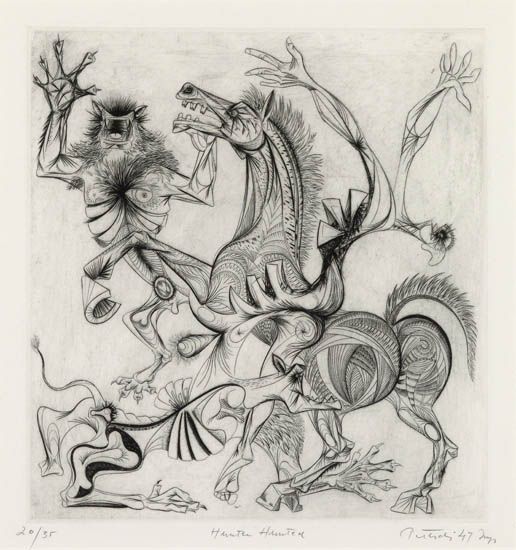