This impression cited by Kennedy (as his third state) with the Mansfield provenance. Lugt credits Mansfield's Whistler collection, which included some 582 etchings, drypoints and lithographs as one of the top three in the world. Mansfield's collection was sold in 1919 to Harris G. Whittemore, Naugatuck, CT, for between $300,000 and $350,000 (roughly $4.5 million today).

Charles James Whistler Hanson (1870-1935) was Whistler's illegitimate son with Louisa Fanny Hanson, who is said to have been a parlor maid. He was cared for by Joanna Hiffernan, another of Whistler's mistresses, despite the fact that Whistler had been unfaithful to her. Hiffernan continued to look after Hanson as late as 1880, even while Whistler was away in Venice with Maud Franklin, then his current mistress. Whistler's relationship with Hanson was never close; the artist failed to attend his son's wedding in 1896 due to the death of his wife Beatrix, apparently nor did he approve of the union.

We have not found another impression at auction in the past 25 years. Kennedy 135; MacDonald 145 (this impression cited by MacDonald, as exhibited at the "Whistler Memorial Exhibition," Boston, 1904, current whereabouts unknown)....
Show More
Set Alert for Similar Items 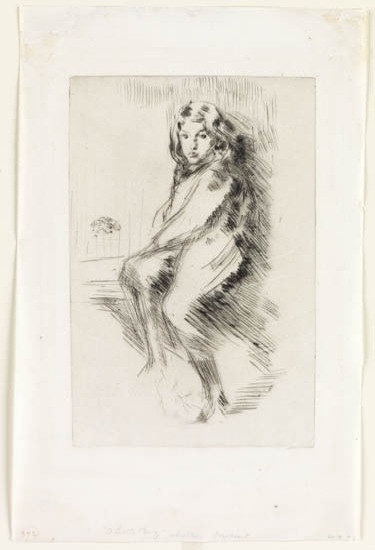