Price Realized: $ 4,000
Price Realized: $ 4,600
Show Hammer Price?Final Price Realized includes Buyer’s Premium added to Hammer Price
Estimate: $ 4,000 - $ 6,000
JOHAN THORN PRIKKER (1868-1932) HOLLANDISCHE KUNSTAUSTELLUNG / KREFELD. 1903.
331/2x471/2 inches. S. Lankhout, Haag.
Condition B+: restored losses, repaired tears, creases and abrasions in margins; tear in right margin.
A graduate of the Academy of Fine arts in The Hague, Thorn Prikker went on to become an artist in many fields, including painting, stained glass and mosaics. In 1903 he moved to Germany where he began teaching at the art school in Krefeld. These three, extremely rare posters were commissioned by Friedrich Deneken, the director of Krefeld's Kaiser Wilhelm Museum, as part of a collaborative relationship with Thorn Prikker. This is the most famous of the three posters, consistently exhibited as a classic example of Dutch Art Nouveau style. It "demonstrates the restraint and symmetry manifested by the Art Nouveau style as adapted in Holland. The juxtaposition of positive and negative, dark and light versions of the same interlaced patterns is allied with a similar succession found in Celtic manuscript borders. The tulip-like floral forms, appropriate to the Netherlands, are combined with shapes related to the decorations on the batik, or wax-resist, textiles of Java . . . In the sidewise green "L" with orange circles is a reflection of a conventional arrangement in the Book of Kells. While the colors in the poster are as brilliant as Gaudi's stained glass panels in Barcelona, they are confined within a framework as rectilinear as the designs of Mackintosh in Glasgow. Prikker's poster embodies the reasoned Dutch approach to Art Nouveau, harmonizing exotic Javanese allusion with medieval decorative tradition, tempering severity with sensibility."(http://www.nelson-atkins.org/collections/printdrawphoto/detail/dutchartexhib.htm) In "A Century of Posters," where the image is reproduced, the authors Martin LeCoultre and Purvis point out that "this copy of the posters was donated by the artist [to a Dutch institution] and therefore is the original version. Later printings lack the background color." This does not sound logical. We can strongly doubt that there was more than one printing for such a short event. Due to the lithographic process we are much more inclined to say that Thorn Prikker tried a different background color at the end of the printing process that was not used on the posters put into circulation. All the other copies known are similar to the one offered here. Dutch Poster p. 97, Modern Poster p. 68, Plakat Kunst p. 52, Century p. 182.
Set Alert for Similar Items 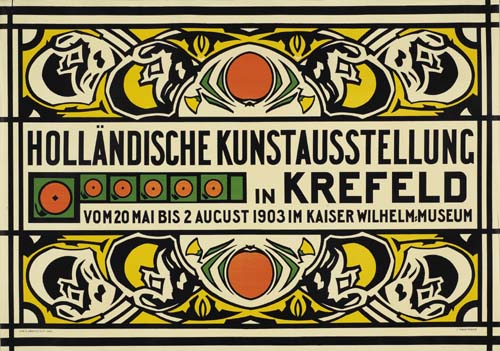