In 1920 Josef Albers (1888-1976) enrolled in the preliminary course, taught by Johannes Itten, at the Weimar Bauhaus before being asked by the founder and director Walter Gropius to stay on the following year to teach in the Department of Design. Before the dissolution of the Bauhaus by the Nazi government in 1933, Albers led the carpentry and glass painting workshops and taught the drawing and lettering classes, often moving freely between media and disciplines as he would in his own art. His fellow faculty members at the Bauhaus included the imporant Modernist artists Paul Klee, Wassily Kandinsky and Oskar Schlemmer.

On leaving Nazi Germany in the early 1930s, Albers and his wife Anni, a superb textile desginer herself, relocated to North Carolina, where Albers was invited to join the faculty at the progressive art school Black Mountain College, near Asheville, North Carolina, at the recommendation of the architect-curator Philip Johnson of the Musem of Modern Art, New York. During his tenure through 1949 he taught Robert Rauschenberg and Cy Twombly and even attracted the likes of Willem De Kooning and Robert Motherwell. Not unlike Atelier 17, Black Mountain College attracted many aspiring artist-students who sought to learn and hone their craft, while retaining and developing their own individual style.

Alber's first experiments with intaglio techniques, drypoints in particular, were those made in 1940 at the Art Academy in Mexico City, a place that brought great intrigue for Albers; as he wrote Wassily Kandinsky years before: "Mexico is truly the promised land of abstract art" (Danilowitz p.11). Most of these prints trace the shapes of organic and curvilinear forms, easily and freeily controlled through drypoint, not so unlike the "automatic" drawings and prints of André Masson and the Surrealists. But, more directly, the voluminous forms of Variants comes out of a class exercise in Albers's drawing classes that required students to create the overlapping, intersecting and foreshortening of elliptical forms while, at the same time, challenging the viewer's perception of space Danilowitz 93.
Set Alert for Similar Items 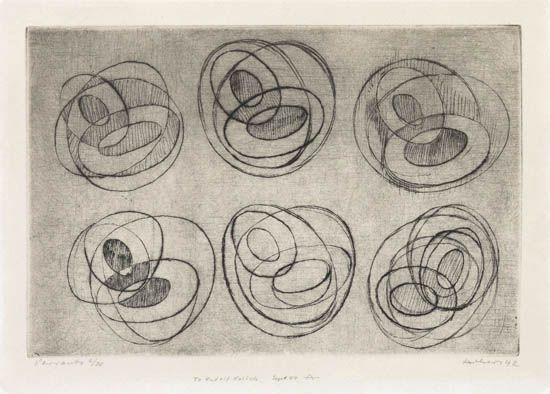