Oil on board, circa 1935. 457x355 mm; 18x14 inches. Signed in oil, lower left recto. With the artist's name and Philadelphia address inscribed in red crayon on the verso.

This striking oil painting of a beautiful young woman is the first portrait by this Pennsylvania artist to come to auction. Although they are very scarce today, Waring's portraits were known in Philadelphia and New York for capturing a new, modern sensibility. Farrington notes how "Warings's paintings, often portraits of friends, family and Harlem literati, are paradigmatic of the images of upscale blacks that marked the Harlem Renaissance." Waring showed her work at the Harmon Foundation in New York, the Pyramid Club in Philadelphia and at Howard University through the 1940s. Her work is in the collections of the National Portrait Gallery, the Smithsonian American Art Museum and Howard University, all in Washington, DC. Farrington p. 82....
Show More
Set Alert for Similar Items 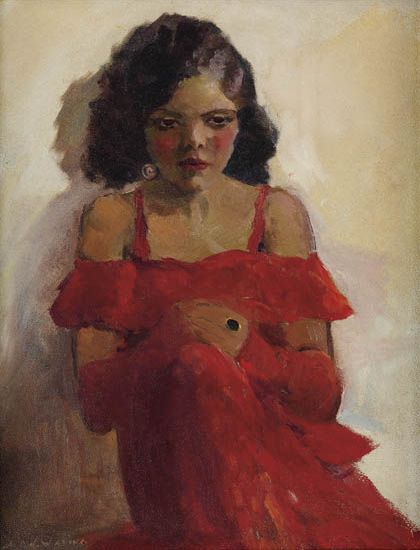