In 1948, a young inmate at the Norfolk Prison Colony named Malcolm Little embraced the Nation of Islam and began corresponding with its leader Elijah Muhammad. Two years later, he took the name Malcolm X. This letter is one of his earliest uses of the name. It is written to a fellow member of the Nation of Islam, seeking guidance and confirmation for his budding faith. The recipient was quite possibly Raymond Sharrieff (1919-2003), Supreme Captain of the Fruit of Islam, and the influential son-in-law of Elijah Muhammad. The letter applies the teachings of the Nation of Islam, analyzing the actions of the President and the Pope, digging deep into the etymology of words to establish Black supremacy, and concluding with a report on his own proselytizing activities from prison, including efforts to convert his own sister.
The letter includes a discussion of President Truman and his Masonic degrees: 'Truman is one who knows what's going on, but you can see he's not talking. . . . No, what is going on now cannot be averted even by Truman, because I do believe he is at present taking his orders from someone above him, from Allah Himself. Can you not see how the land is fast becoming crippled by various methods and Truman raises not a hand to deter the events--he must be powerless!!'
The bulk of the letter is an effort to divine the meaning of Blackness: "The Light teaches the Blacker a man is, the holier he is inside. Oddly, but I've never been taught this yet, directly, by anyone--but my mind has given it much thought and drawn many conclusions. When I was a kid, we lived on a farm--the richest, most fertile soil was black. . . . Long have I wondered what made people Black. Since accepting Islam I have pondered over what it is that the Godly possess that the ungodly lack . . . Remember the spirituals, called even by the devils 'the songs of God'? These songs of God can only be sung by those possessed of God . . . Those who are without Spirit are 'blanc' (French word for 'white'), for the Truth can be seen! The truth is life, and a tree without roots is dead. . . . Is the sun the essence of blackness? Or is blackness the essence of the sun? Is there any difference? . . . Africa being the Home of the Holy People, is Africa not then the Holy Land everyone is fighting for--and these devils, having robbed us blind, point elsewhere to fool us on the true whereabouts of the Holy Land, and we so blindly look where he points. . . . Is the Nile the true River Jordan? Was the Nile not the river that we were sold down, the river that we descended? Brother, forgive me for the many queries, but this devil sure has things confused, and everyone in darkness. When the Light fully shines, I pray Allah will not put the sword in my hand, for I don't believe I could be merciful to the devils--not after knowing what I today know. . . . Just as ours is the highest essence of Blackness, the Most Holy, Allah, All in All, theirs is the opposite, theirs is blanc--nothing! Lucifere! Lucifere is a Latin word. Breaking it apart: fere is the verb 'to be' meaning 'to carry,' luci means white. This truth gives me my real kicks, Brother.'
Malcom X concludes with his efforts to bring others to the Nation of Islam, including fellow prisoners and most notably his sister: "My sister, Mrs. Ella Lee Collins . . . is one person I pray you will write to. . . . She only knows of Islam what she has heard from me, but she is a lover of our Black nation, and is herself the most beautiful and most Black woman I know. . . . She's married, but her husband won't mind. . . . Sister is the boss of the household. . . . Don't forget to tell me of S. Stitt [jazz saxophonist Sonny Stitt], and all of the others in show biz who are Muslims. The young fellows here like to know those things . . . the musicians' leanings, religiously and otherwise, tend to sway the leanings of the youth."
A remarkable letter, showing Malcolm X in the early rush of enthusiasm and curiosity for the religion he would follow for the entirety of his public life. 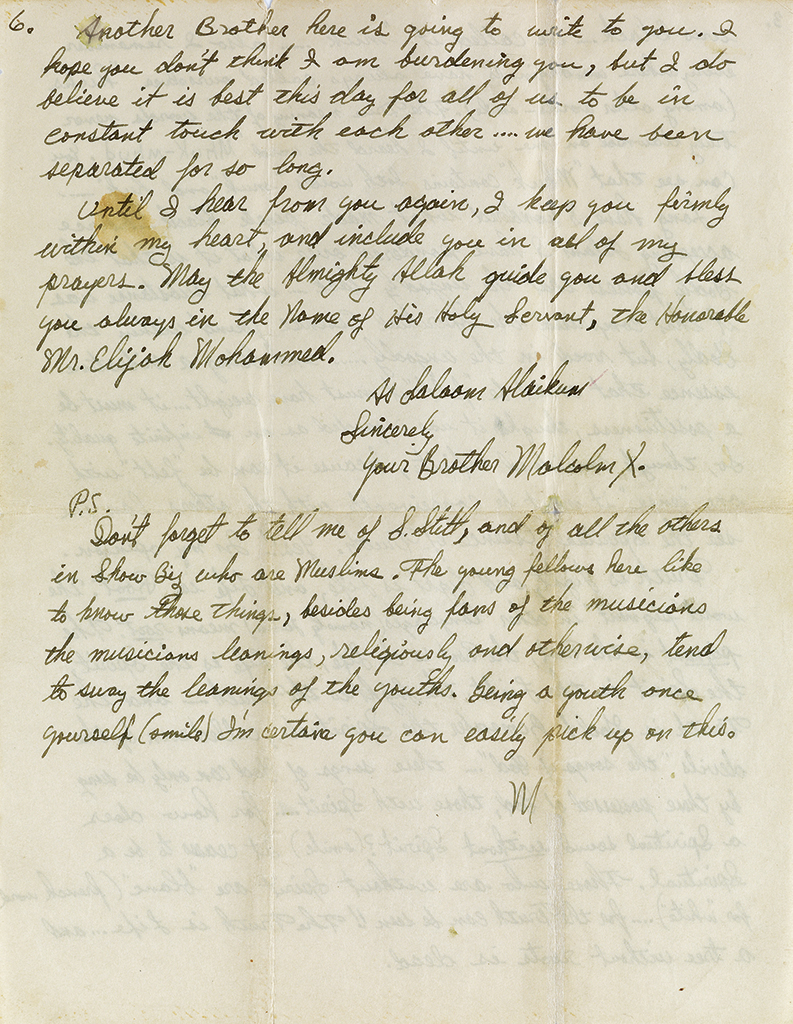 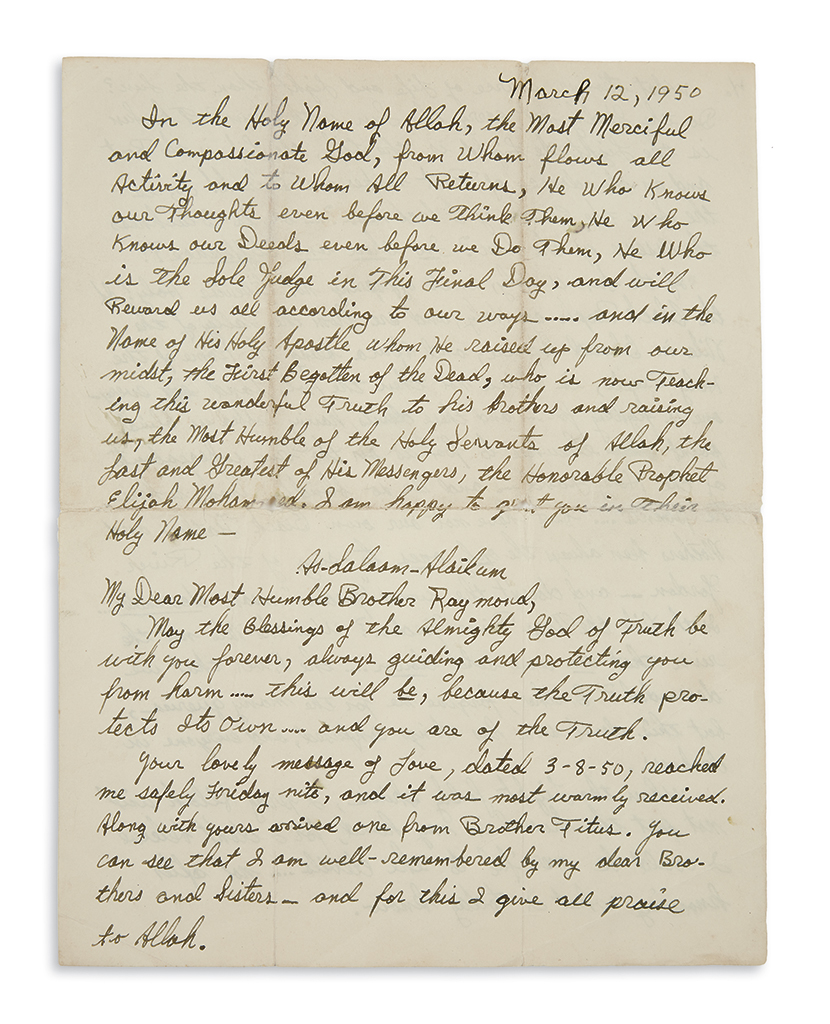