Primarily a self-taught artist, Husain (1915-2011) is among the most important Indian painters of the 20th century. In the 1940s he joined the Bombay Progressive Artists' Group which had been founded by another pillar of 20th century Indian painting, Francis Newton Souza. By the 1950s, Husain had become one of the first modern Indian artists to break with nationalist traditions and adopt various influences from post-Impressionism, Fauvism, Cubism and the international avant-garde into his work. From the time of his first solo exhibition in 1952 in Zurich onward, his paintings--usually thematic works on topics ranging from Mohandas K. Ghandi to religion to rural Indian life and his stellar horse subjects--became increasingly popular and more expressive due in part to the influence of Abstract Expressionism via the New York School of the 1940s/1950s. He also imbued his work with characteristics from earlier European modernists like Cézanne and Matisse, as well as Picasso, with whom he shared the prestigious special invitee status to the São Paulo Biennial in 1971.

Though his works were seemingly indifferent to any religious or political leanings (Husain's upbringing was Muslim), he came into conflict with Hindu nationalist groups through his continued depiction of Hindu deities in unclothed and sexually suggestive poses. Owing to mounting threats in the 1990s, his house was attacked and vandalized in 1998, he lived in self-imposed exile, mainly in London and Dubai, for much of the remainder of his career until his death in London.

Husain's recognition as one of India's top artists owes significantly to his horse paintings. He pursued this theme, from the late 1950s onward, with more vigor and expressiveness than any others in his oeuvre. Like Degas and Toulouse-Lautrec--late 19th century predecessors famous for their depictions of horses--Husain painted horses in various motions in order to represent their grace and strength, usually in bold color palettes as well.

The current work, which has not been on the market in decades, exhibits the finest qualities of Husain's horse paintings--sweeping, bold brushstrokes, a chiseled, white horse with rich black contours brilliantly set against a muted, greenish, tan background. Taken as a whole, the expressive lines betray the influence of Franz Kline and Willem de Kooning, while parts--notably the yellowish orange head--evoke Picass's own equestrian portraits. The horse is at once grand and powerful, sculptural and agitated in expressive movement.
Set Alert for Similar Items 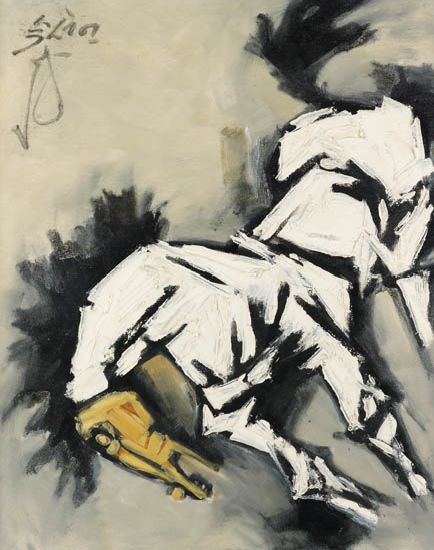