Price Realized: $ 85,000
Price Realized: $ 106,250
?Final Price Realized includes Buyer’s Premium added to Hammer Price
Estimate: $ 40,000 - $ 60,000
BOOKS FROM HIS LIBRARY WITH HIS MARGINALIA MELVILLE, HERMAN. Two volumes, the first Signed, "H. Melville / N.Y.," on the front free endpaper, and annotated throughout with over 100 holograph words, both with numerous holograph underlines and marginal paragraph markers, in pencil: Juvenal and Persius. The Satires * Euripides. The Tragedies, vol. III. The inscribed text, mostly in first volume, mostly short phrases written on blanks or in lower margins. Each volume inscribed with place name on front free endpaper: the first: "C[ape] H[orn] 2"; the second: "C[ape] Horn." The books, the only remaining volumes from the 37-volume Harper and Brothers set, Classical Library, purchased from the publisher by Melville on March 19, 1849, as recorded in the firm's account statement (Sealts 147; 207a vol. 3 only; 304.1). 2 volumes, 12mo, publisher's cloth, chipping at edges with some loss to backstrip ends, repairs to backstrip of first; moderate foxing throughout first, rear blank of first lacking. New York: Harper, [1848?]; 1848; inscriptions: "Cape Horn [Chile]," circa 1860
Set Alert for Similar Items

In the first volume, written on verso of title-page: "Tho' horrid truth through all / his labors shine, / In what he writes there's / something of divine / Dryden on Juvenal [From 'Boileau's Art of Poetry']."
As an appendix to the Satires of the first volume is printed Samuel Johnson's work, The Vanity of Human Wishes, which concerns the vain military conquests of Charles XII of Sweden. Written in the upper margin of a page in this work: "Mexican Max[i]milian / Louis Napoleon / &c &c &c," suggesting a comparison of the exploits of Charles XII to the designs of Napoleon III and the complicit military hubris of Maximilian in Mexico; this, in turn, suggests that the note was written circa 1867, when the empire of Maximilian I was overthrown. And in a blank space at the end of this work: "Prose is uncertain, verse still / more so. But the meaning here / would seem to be--Virtue, tired / with contempt, gives it up, and / latches herself for self-support to / Pride & Prudence; but fails here; / i.e., perishes, probably, on / the gallows--of slander, / most likely." A complete transcription of the inscribed text available upon request.
In May of 1860, Melville sailed from New York to San Francisco aboard the Meteor. As he rounded Chile's Cape Horn in August, he likely made many of the annotations in these books, as the volumes are marked with the Cape's name (Melville often recorded place names in the books he traveled with). From his letters and from these annotations, we know that Melville occupied his time during the long trip engaged in the study of poetry, an experience that likely influenced the poetic works that became the focus of the remainder of his literary output.
with--Two volumes from a similar set, Harper's Family Library, not known to have been owned by Melville, but found in the same location as the other volumes: Southey. The Life of Nelson Bacon. Essays; and Locke. Conduct of the Understanding. The second with some underlines and paragraph markers in an unknown hand. 2 volumes, 12mo, publisher's cloth, worn. New York: Harper, [1855]; 1860.
The contents of this lot have never before appeared at auction and were last sold privately to the current owner 30 years ago. The last time an inscribed book from Melville's library appeared at auction was on December 15, 2005, at Christie's New York, lot 492: Crabbe's Tales of the Hall signed and with some annotations (Sealts 162a). 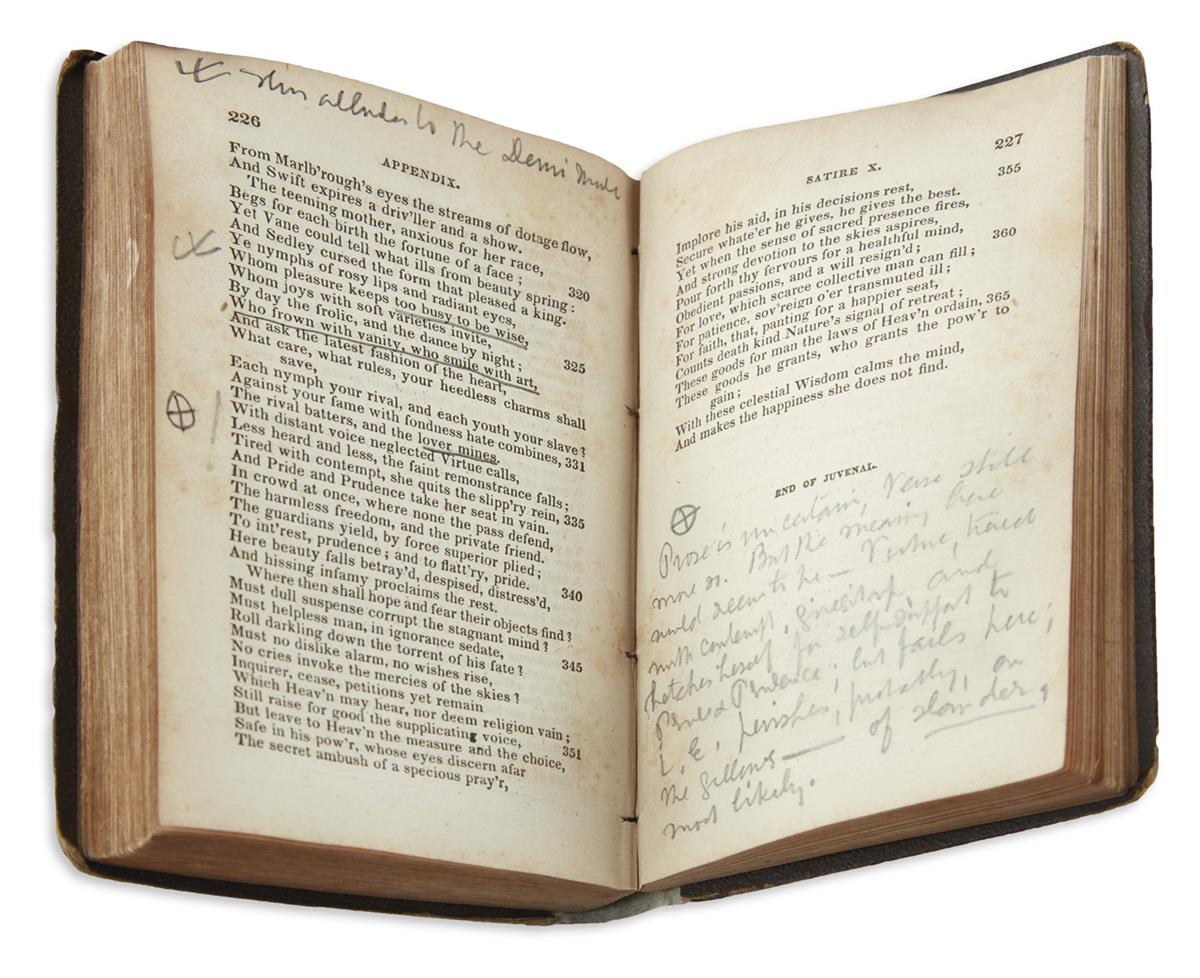