This is the first important sculpture and the earliest work by Fuller to come to auction. In 1899, the young Ms. Warrick graduated from the Pennsylvania Museum School for Industrial Arts with honors. With a letter of introduction to Henry Ossawa Tanner, she moved to Paris in late October to continue her studies at L'École des Beaux Arts. Fuller befriended Tanner, and received advice and support from the sculptors Augustus Saint-Gaudens and August Rodin. Rodin's sponsorship facilitated an exhibition of 22 sculptures at L'Art Nouveau Gallery in 1902, as well as her inclusion in the Salon of 1903.

Fuller's most famous work, The Awakening of Ethiopia, circa 1910, in the collection of the Schomburg Library and Research Center in Harlem, is considered one of the early symbols of the Harlem Renaissance and among the first American art works to reflect the influence of African sculpture. Benjamin Brawley's 1918 work, The Negro in Literature and Art in the United States, describes her as one of the first artists to explore "the tragedy of the Negro Race in the New World." Brawley mentions Peeping Tom as one of the many early works that did not survive the artist's disastrous studio fire in Philadelphia in 1910. Apparently, it was only missing at the time, or this version was not known to exist. This plaster figure was in the artist's estate when she passed away in 1968.

The Peeping Tom character comes from the legend of Lady Godiva's naked ride through the streets of Coventry. In the tale, the townsfolk agreed not to observe Godiva as she passed by, but Peeping Tom bore a hole in a door to spy on her. According to the legend, he was immediately struck blind. Leininger-Miller pp. 8-9; Campbell p. 177.
...
Show More
Set Alert for Similar Items 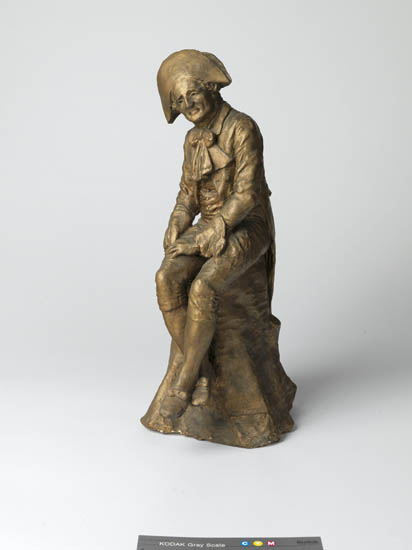