Exhibited: Willard Gallery, New York, March 1 - 26, 1949, with the label on the frame back. Magenta Haze was one of 15 paintings in the artist's first solo exhibition at Willard Gallery, at 32 East 57th Street, #12 on the exhibition "catalogue" checklist.

Magenta Haze is an important and striking early abstract painting by Norman Lewis. It is also one of the earliest abstract paintings by the artist to come to auction, painted in the first full year of his work in abstraction. In both Magenta Haze and Twilight Sounds, also of 1947, in the collection of the St. Louis Art Museum, Lewis covers the canvas with an interwoven and linear abstraction, suggestive of a moving mass of figures. In Magenta Haze, the dense, sensual color of the ground adds tension to the painting as it surrounds the composition. In this late 1940s period, Norman Lewis was clearly inspired by jazz--Duke Ellington wrote his blues-inflected composition Magenta Haze in 1946. Other paintings from Lewis's first solo exhibition are in museum collections, including Metropolitan Crowd, 1946, in the Delaware Art Museum and Cantata, 1948, in the Dayton Art Institute.
Set Alert for Similar Items 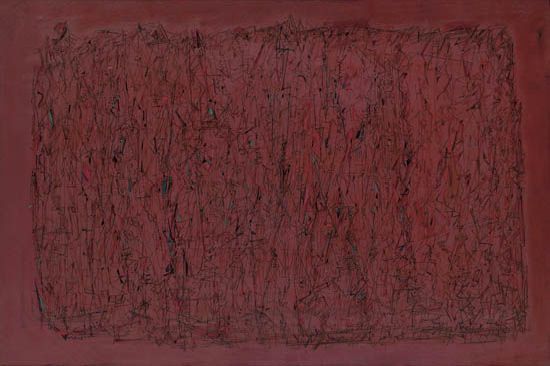