Irving Penn was in Lima for a Vogue fashion shoot and decided to stay on in Peru for Christmas. This image, taken in a local photographer's studio, is arresting and bold, a precursor to the so-called 'primitive' studies that would occupy Penn more fully in later decades. In all of these works, Penn is less interested in ethnographic, anthropological portraits of his subjects, and instead seemingly concerned with how his subjects stand, their relationship to each other, and here, their relationship with the camera.

Penn's aesthetic choices-- the spare, weathered floor, which is adored just by a stool, and the neutral backdrop -­ are largely in step with his ground-breaking fashion photography, which also predominantly relied on a sparseness that highlighted the garments and models he photographed. And yet, perhaps because of this simple compositional elegance, Penn's photographs are visually attentive, evidencing a broad range of tones, and are so technically adept that the roughness and the wrinkles of clothing the figures wear is tactile.

Penn's preference for natural light, which here dramatically highlights his subjects' faces, and his sumptuous classical approach, lends this scene a reverent, pious stillness. The whites of the little girl's eyes leap out, confrontational and wary. Her brother exhibits a knowing, unwavering gaze, and an unnerving lack of youthfulness, even in his oversized clothes. They hardly seem aware of each other, despite the boy's protective grasp on his sister and their clasped hands. Penn lets them be; his hand is nowhere but at the shutter, nowhere but in the richness and details of the print. 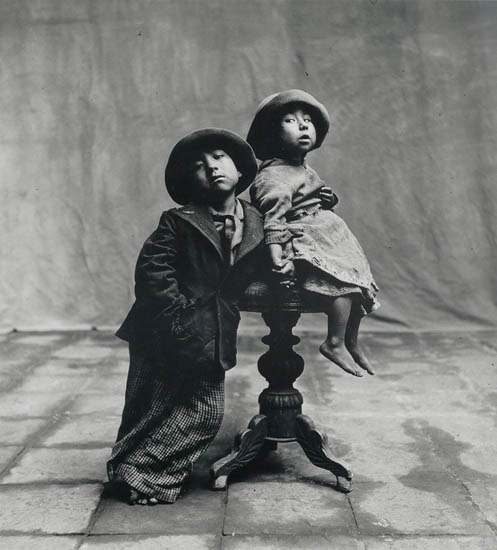