The explorer and scientist William Healey Dall (1845-1927) wrote this letter as a young man, after serving in the Collins Overland Telegraph Expedition from 1865 to 1867. The expedition had attempted to lay a telegraph line from California through British Columbia, the interior wilds of Russian-held Alaska, across the Bering Strait, and on to Moscow. This was seen as a more practical alternative to the failed transatlantic cable projects. However, when the first successful cable across the Atlantic was laid in 1867, the Western Union expedition folded its operation.

William's epic letter was written in what he still describes as "Russian America," although just two months earlier the Seward Purchase had been completed and the flag of the United States raised. He addressed it to his father, the Unitarian missionary to India, Charles Henry Appleton Dall (1816-1886, see also lot 164). William had remained behind in Alaska after the Americans ended the expedition, wintering over in a small trading post with Russians and "a little halfbreed boy who Ketchum brought down as an interpreter from Fort Yukon, and whom I volunteered to take care of, feed, clothe, & get home again in the spring," as well as two Inuit: "my faithful Rurill, the other Peetka, whose hand I saved last year after he had blown it pretty well to pieces by careless use of his gun." He describes the Russian inhabitants as "most of them felons, sent here from Siberia . . . For lying, stealing, and all petty meannesses and gross vices, taken as a whole they would be hard to match." He goes on to describe his entire past year's adventures: paddling down the coast of the Bering Sea by night in a small walrus-skin craft, searching for a harbor by the Northern Lights; climbing a 70-foot cliff by himself to collect a cache of fossils, "dropping from ledge to ledge by the light birch which grew in the clefts of the rock." William held onto the letter all winter without any opportunity for sending it, and then resumed on 23 April, still in Nulato. Here he describes (and draws) the style of fish trap used on this coast. He also describes the frenzied reaction of the Russians who had been told to liquidate the Fur Company, "pack up all the company's property and put it on a raft, abandon the fort to the elements & the Indians, and float down to the mouth of the Youkon." Months later, he still had found no means of sending the letter, so added three more pages on 26 September 1868: "I shall give you an account of my trip down the Youkon & narrow escape from being shot by an Indian on the way, when I get home."

WITH--a much shorter second letter from Dall to his mother, San Francisco, 4 October 1868, while headed home: "You must expect to see a rough sunburnt individual whose nose has been reddened by frequent freezing; and whose complexion has not been improved by the Arctic sun & wind, or a diet of fish and sealmeat; and whose temper has suffered from driving dogs."

AND--an undated, untitled, unsigned speech on the growth of the Episcopal Church in Alaska, 17 pages on loose sheets, 9 1/2 x 5 3/4 inches. It was apparently written for an audience of Episcopalians (see page 9). The events of 1886 are described as "less than 20 years ago," and the term of Bishop Peter Rowe is described as extending "for ten years" (page 15), suggesting a date of 1905. 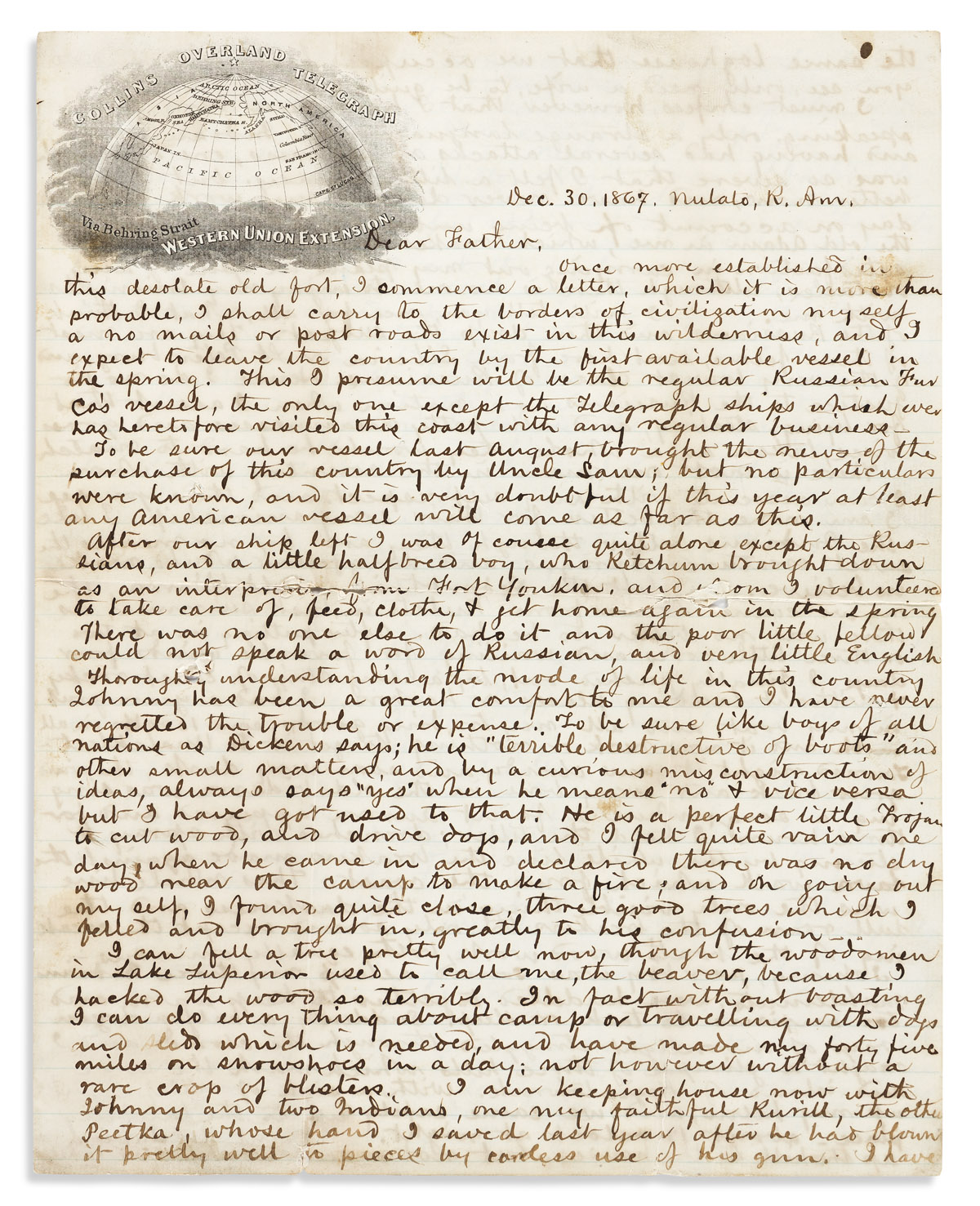