The collection includes a partial copy of the 1691 Tulley almanac (leaves for March through October only). The earliest complete almanac here is Clough's Farewell: An Almanack for . . . 1708, published in Boston by Bartholomew Green. Clough had been issuing almanacs in Boston since 1700, and had died in October 1707 just as this edition was almost ready for press; it features a black-bordered title page and a page-long elegy to Clough on the final leaf. Other early almanacs include 7 from the 1720s by Travis, Whittemore, and Bowen Joseph Stafford's almanacs for 1739 and 1740 and a large grouping of 41 Nathaniel Ames almanacs dating from 1732 to 1786. Ames's "Astronomical Diary or Almanack for . . . 1772" includes 3 woodcut engravings by Paul Revere: the dwarf Emma Leach, "The Patriotic American Farmer" John Dickinson and Catharine M'Caulay (see Brigham, Paul Revere's Engravings, page 135).
Many of these almanacs were issued during the years of the American Revolution and contain related content. The Salem edition of "Bickerstaff's Boston Almanack for . . . 1777" features a title-page portrait of John Hancock. Stearns's "The North-American's Almanack, and Gentleman's and Lady's Diary, for . . . 1776," issued in Worcester, MA during the Siege of Boston, features "An Account of the Commencement of Hostilities between Great-Britain and America, in the Province of Massachusetts-Bay." The Ames almanac for 1775 features the dramatic cover illustration "The Virtuous Patriot at the Hour of Death," and the 1777 edition includes an important map, "A View of the Present Seat of War, at and near New-York."
Many of the almanacs have contemporary manuscript notes or ownership inscriptions; a few were used as diaries or daily memorandum books, not an uncommon practice in the 18th century. For example, the "Bickerstaff's Boston Almanac for . . . 1768" was used as a diary by the Rev. Abishai Sabin of Pomfret, CT, using interleaved sheets. Thomas's Massachusetts Almanacs for 1785 and 1786 were similarly used by an unidentified lawyer.
The collection includes approximately 300 different almanacs, with about 240 of them dating from the 18th century, plus more than 40 duplicates. Most of them are from Massachusetts; exceptions include several early almanacs from Philadelphia, New York, Providence, Newport, Hartford, and New London. Benjamin West's "An Almanack for . . . 1763" was his first almanac, and the first almanac printed in Providence, RI--one of the earliest Providence imprints. This lot does not include any work by early America's two most famous almanac editors, Benjamin Franklin or Benjamin Banneker. It otherwise includes a strong cross-section of important almanacs from the early 18th century though the Revolution and the Federal period. Provenance: from the collection of Jay Snider. Detailed inventory available upon request. 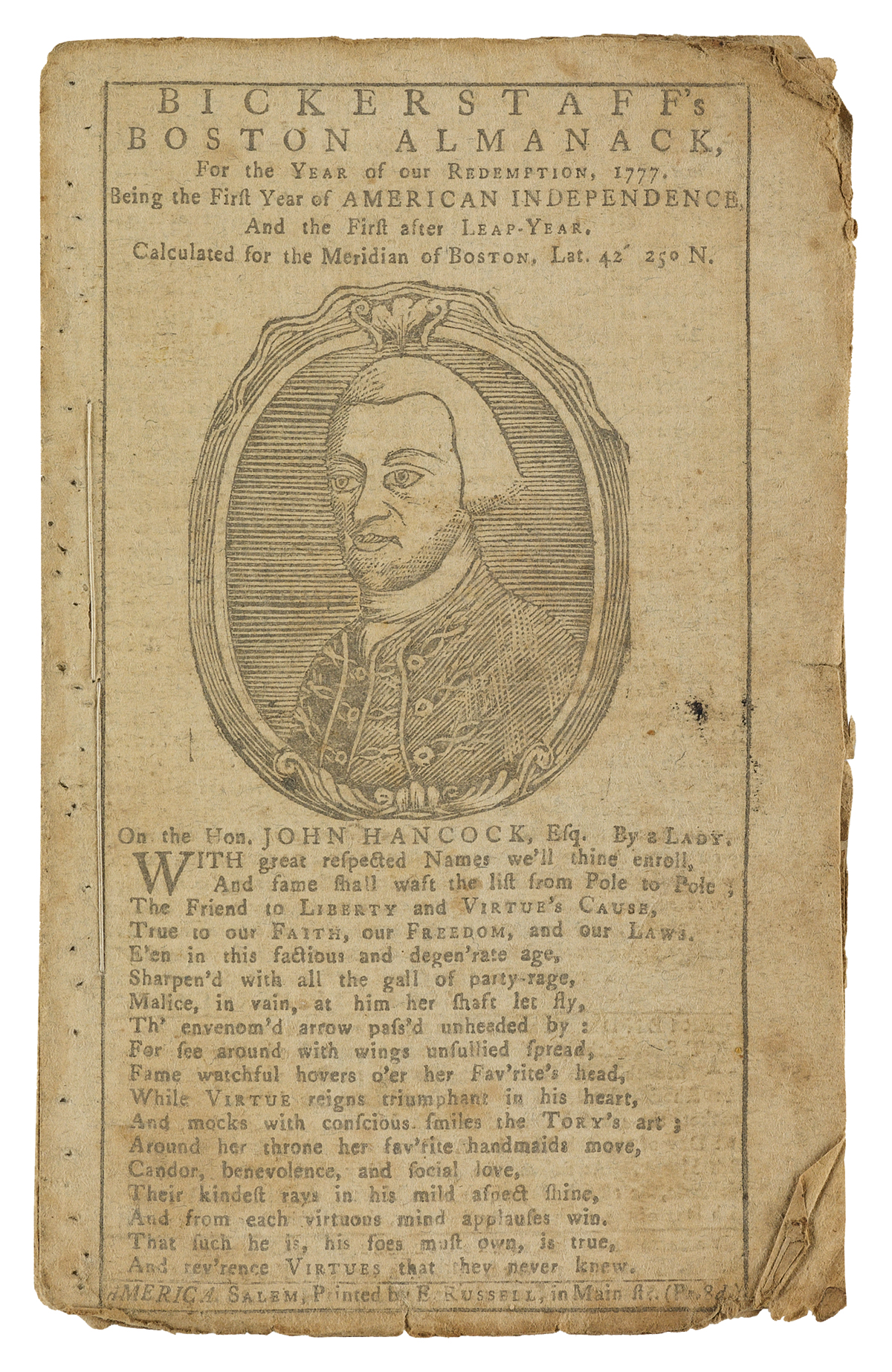