In August 1881, the Brulé Sioux subchief Crow Dog (1833-1912) shot and killed tribal police commander Spotted Tail, who had been handpicked by federal authorities and was regarded as an accommodationist. The facts of the killing were not disputed; in accordance with Sioux custom, Crow Dog made restitution to Spotted Tail's family and the matter was regarded as settled. However, the federal Indian agent pressed charges, and Crow Dog was brought to trial in Deadwood, SD in March 1882. The jury pronounced him guilty, but the United States Supreme Court overturned the conviction, ruling that as the killing took place on tribal land, the federal government had no jurisdiction. The ruling remains of seminal importance to Indian law today.

This autograph album dates to 12 March 1882, during the trial. Standing out among these inscriptions is a hand-colored drawing in ink and colored pencil which represents Crow Dog on horseback killing a mounted rival. Behind him is a representation of his name: a crow riding on the back of a dog, linked by a line to Crow Dog's head. The drawing is done in the well-documented ledger art style which was commonly practiced among the Plains Indians during this period.

In addition, the volume contains dozens of signatures from the key figures in the trial: jurors, bailiffs, attorneys, and more. 15 of the Sioux witnesses signed by mark, with the marks made within calligraphic captions, including Spotted Tail Jr. One page contains the signatures of all 13 jurors, with names matching those listed in the 17 March 1882 issue of the Black Hills Daily Times, including one juror who was replaced due to illness, along with his replacement. The two court bailiffs also signed this page. 4 of the jurors also added fuller inscriptions on separate pages. 18 other South Dakota men also signed the volume, almost all of them dating their signatures in March 1882, including General John Cook; interpreter Charles Talkett; attorney Thomas E. Harvey; E.E. Corbin of the Sidney & Black Hills Stage Line; and Lead City newspaper editor Dolph Edwards.

The album is accompanied by a 2013 letter by the director of the Plains Indian Ledger Art Project, placing the drawing in historical context. This was one of at least three albums produced at the time of the Crow Dog trial, each with very similar Crow Dog drawings, and similar sets of witness signatures framed in the same calligraphic hand. Reproductions of the other two known drawings (one at Deadwood's Adams Museum) are included. A Black Hills Daily Times article dated 15 December 1882 describes the creation of these drawings, explaining that the captive Indians would "while away their spare moments by filling out autograph albums for their pale-faced friends. . . . They generally draw illustrations of some valorous deed performed while at war with their natural enemies--the Crows and Pawnees." The same newspaper also noted: "Crow Dog's autograph is a very plain and comprehensive specimen of calligraphy. It consists of a crow riding on the back of a dog."

The album's compiler and original owner are not credited, but one entry by U.S. Attorney Hugh Campbell is addressed with "my highest respects to an independent and upright juror who dared to do his duty in face of a maudlin sympathy & a silly press." A list of witnesses near the rear of the volume in a distinctive tidy hand perfectly matches the signature and inscription by juror Frederick Ernest Bachelder (1846-1915) of Portland, SD, who may well have been the original owner. He signed the book with the inscription "Now is the time for hungry men to hang together." Bachelder spent most of his adult life in as a railroad clerk and newspaper editor in Clinton, Iowa but spent two years in the Deadwood area from 1880 to 1882 and returned to Clinton in 1884 (per Pierce, "Batchelder, Batcheller Genealogy" page 333).

Provenance: collection of the late South Dakota antiques dealer Jim Aplan; through two other parties and thence by auction to the consignor. 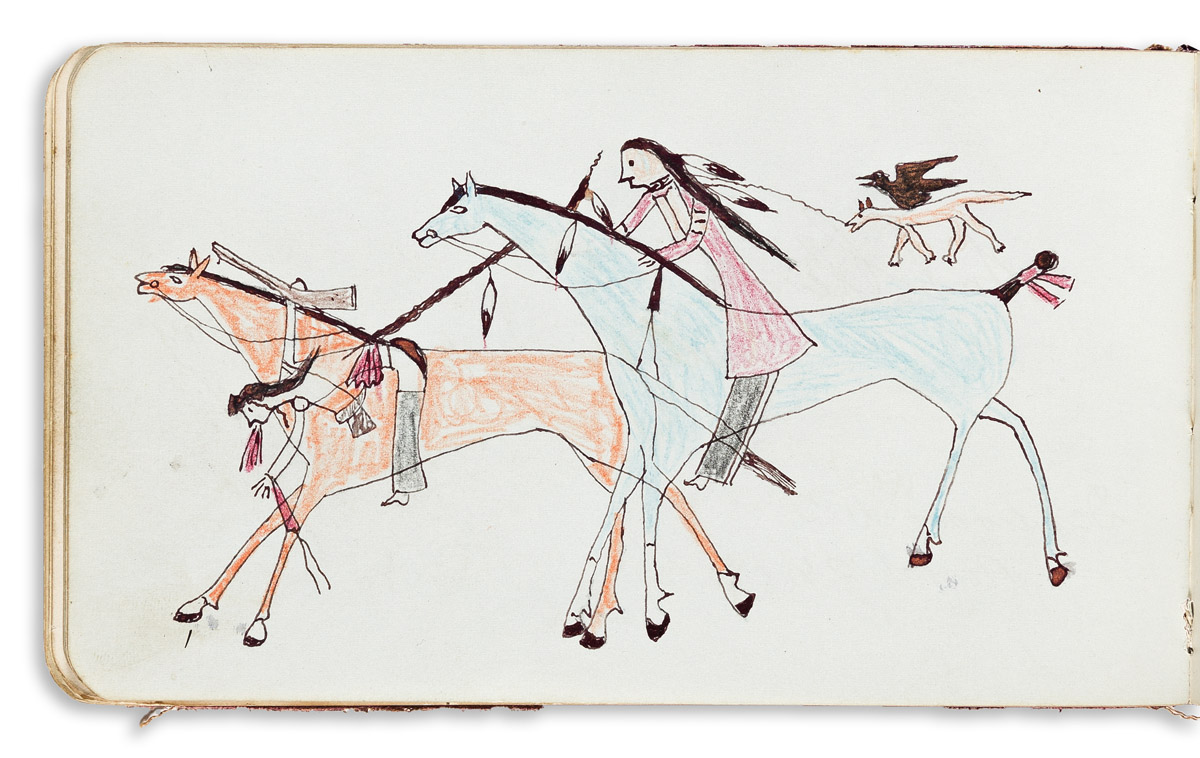