This archive covers a critical period in Cherokee history, from 1898 to 1906, when the federal government aggressively dismantled the Cherokee Nation's independent government and transformed the Indian Territory into the new state of Oklahoma.

Joshua Ross (1833-1924) of Muscogee, Indian Territory was a nephew of longtime Cherokee principal chief John Ross (1790-1866). He was an 1860 graduate of Emory and Henry College in Virginia. His wife was Muskogee Yargee Ross (circa 1840s-1913), from a similarly prominent Creek family and also influential in the community. They resided in Muskogee in the Creek Nation, where Joshua became a prominent leader and shopkeeper.

The earliest item in the collection is an 1848 letter from cousin Minerva Murrell to Ross while he was attending boarding school in Fayetteville, AR, exhorting him to be pious and modest: "Show your teacher how well a Cherokee boy can behave himself." The bulk of the collection begins in 1872. Cherokee politics (particularly the race for Principal Chief which often included a Ross family candidate) and tribal membership claims are frequent topics of conversation from the beginning. H.C. Hedrick of Sherman TX writes in 1878 regarding a friend who wants to settle in Creek Nation for business: "He fears he cannot get satisfactory evidence that he is of Indian blood . . . look him up a good looking smart young Creek squaw and he will obtain rights in the nation after the old plan. But, joking aside, he is willing to go to the nation and operate with you." Joshua's cousin William Potter Ross (1820-1891), the former and future Principal Chief of the Cherokees, wrote from Washington on 4 January 1872: "Our people--the Indian people--should not shut their eyes to the fact that sooner of later their political relations must undergo a change. It is no want of patriotism to say so much as that. . . . Called with the unvarnished multitude to pay New Year's compliments to the President [Grant]. . . . Major Boudinot, Dr. Long, Col. Pitchlynn, Judge Fields & Genl. Cooper are also in the city." Two letters from Indian agents dated March and April 1873 negotiate the prices to be paid for cattle killed by railroads in Creek Territory.

Ross was a leader of the Indian International Fair from its 1874 inception. The fair brought together representatives from nations across the Indian Territory and beyond. 13 letters relate to the fair, including communications from several other nations. An 1882 letter promises "If you could get Col. Tunstall a full Indian costam I will pay the money for the buck skin suit for him and I will bring him . . . to the Indian Internation Fair." Also included are a manuscript list of premiums awarded at the inaugural 1874 fair; an undated manuscript list of submitted items arranged by nation, and a printed handbill program for the 6th fair in 1879 which gives the four-day schedule and the rules. OCLC lists only one copy. Finally, an 1891 letter complains: "Our people seem to have lost interest in our fair and the 2 or 3 of us who have kept it up for the last 4 years have got tired of doing all the work, and myself footing all the bills. We have concluded to let it rest for a while."

The letters get more intense in the late 1890s as the Curtis Act of 1898 started to threaten the Cherokee Nation. H.C. Ross wrote on 13 March 1899: "Things are so complicated. I mean our public affairs. What will become of us? Nobody can tell. As all the government officials are in your town, you may know what they are going to do about the Curtis law, whether it will be enforced in full." Ross's sister Jennie Murrell wrote frequently from Bayou Goula, LA during this period. On 8 January 1898 she wrote: "I am astonished at the Cherokee lawyers trying to deny our Cherokee blood. I am willing to leave it to any Cherokee & I dare say ours is purer & better Cherokee blood than those who testify to a lie. I don't want to be left out, so do all you can." Similarly cousin George Murrell wrote on 29 October 1896: "I regret that you failed to get our names on the census rolls. . . . I dislike to think I am disowned & have no claim in the country my grandfather & father lived in for so long, and loved so well." Brother J.M. Ross tried to untangle the history of a family enslaved by the Rosses in a 20 April 1896 letter: "Calvin Ross was a son of Chaney daughter of Sam & Betsey Ross, slaves of mother. His father was Andy Fields, slave of Mrs. Sallie Fields, and after her death was bought by her son Rider Fields, who lived in the Creek Nation. Calvin had a half brother named Buck that lived with bro. Dick Ross." Ross wrote to a contact in Washington, Simon Walkingstick, on 28 June 1898: "Please send true copy of the Curtiss Bill . . . The Dawes Commission are sending out their wagons . . . to Seminole Nation to take census and about the middle of July or summer will come to the Creeks for the same purpose." Cherokee leader Jesse Cochran wrote from Washington on 9 March 1908(?): "I have little to write encouraging a hope that the Cherokees will be fairly treated by the Government. Our fate is sealed and we can only take such settlement as they are willing to give us out of our own property. The old treaties have been thrown to the winds. . . . We have no sympathizers here as of old. The Indian Territory is an open door to the people of the U.S., and they propose to go in and help themselves."

More detailed notes on this important Cherokee archive are available upon request. 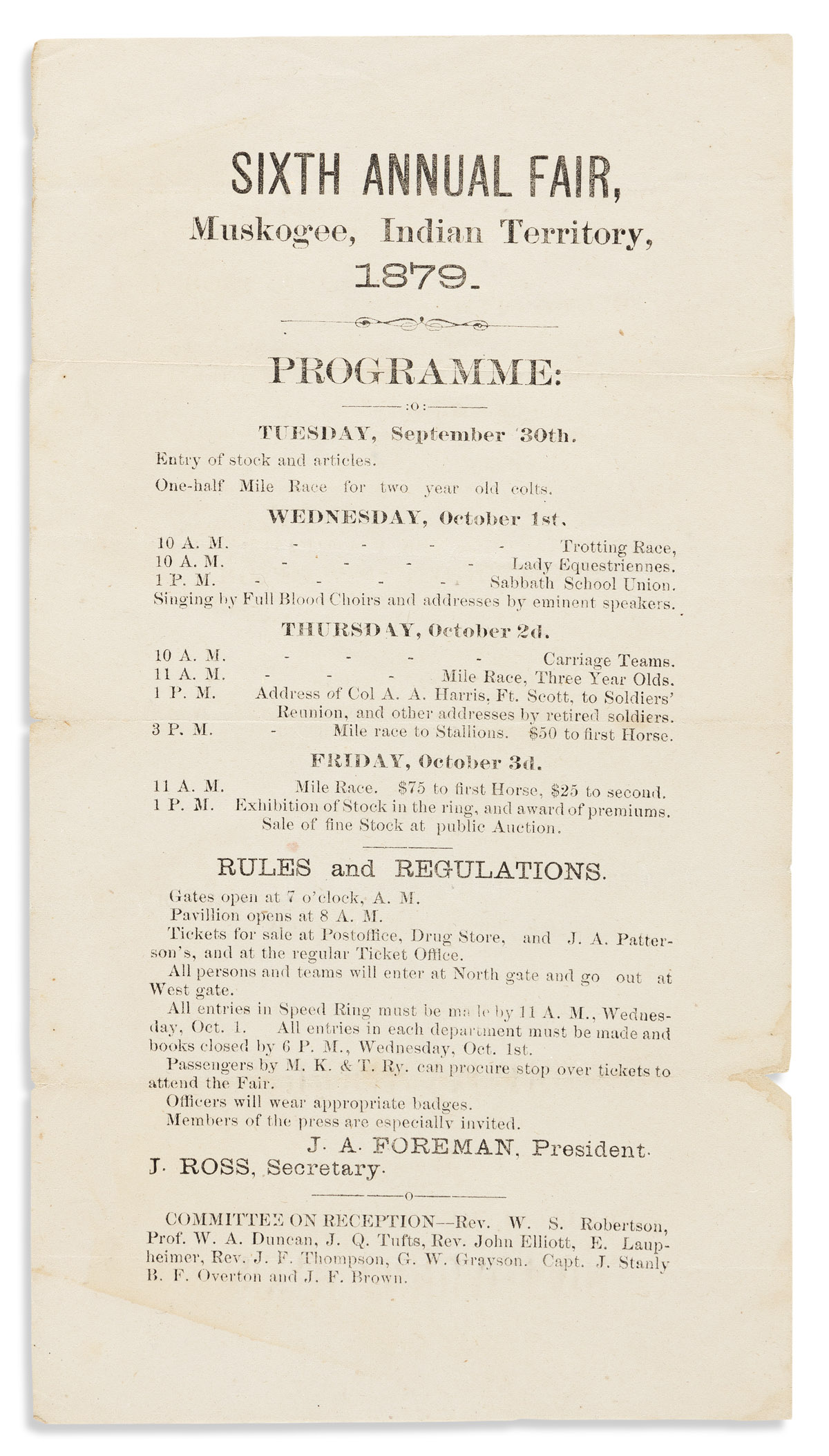 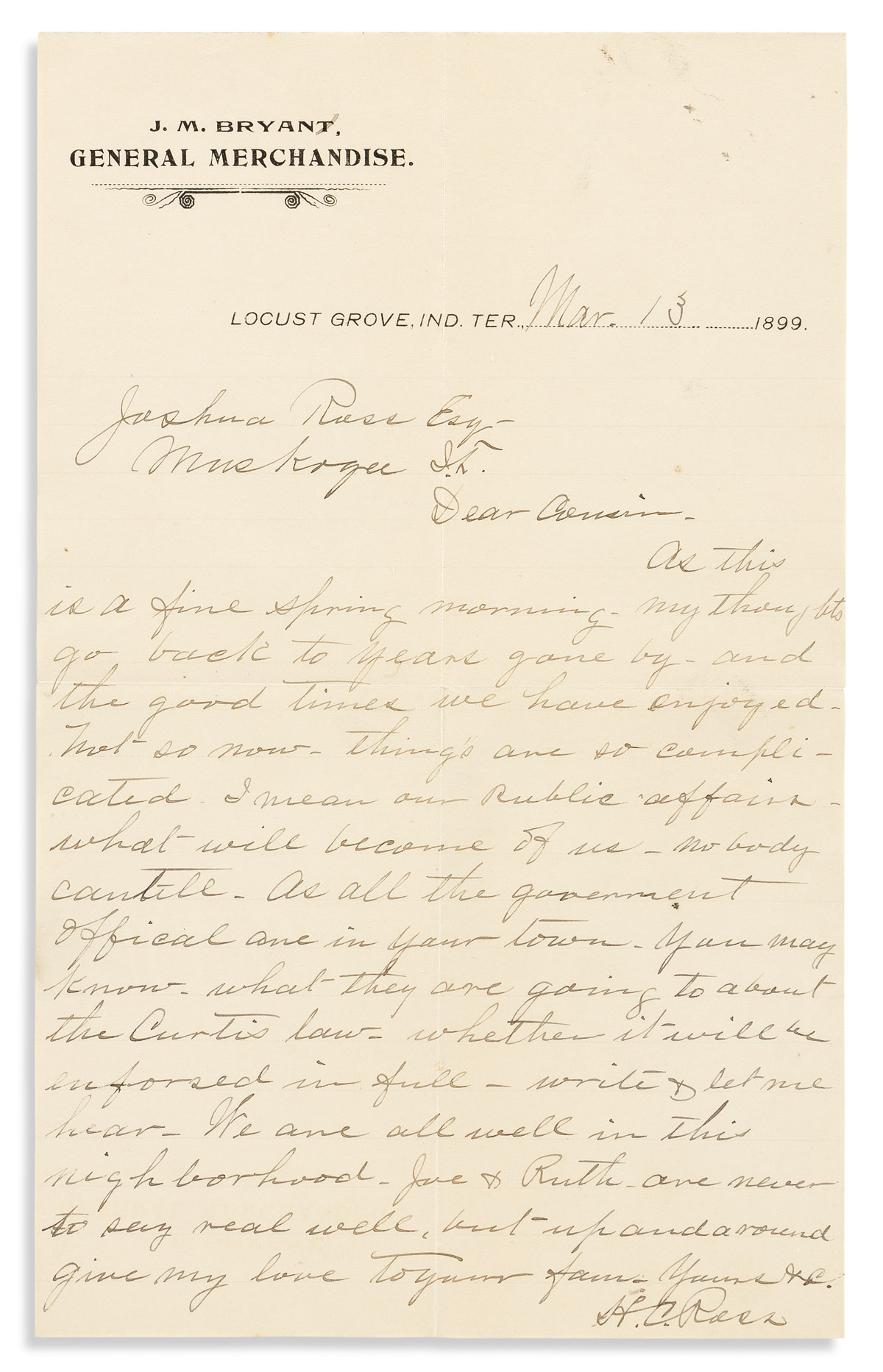