John André, later to gain fame when he was caught relaying messages from Benedict Arnold and executed in 1780, was a lieutenant in the British Army at the outset of hostilities. He was caught in the Siege of Fort St. Jean in Quebec, and captured when the fort fell to the Americans on 3 November 1775. He was sentenced to prison in Lancaster, PA but as a gentleman officer was trusted to make his way to his captivity under his own power. En route he stopped in Albany, NY for several weeks, where he stayed with the family of Mayor Abraham Cornelius Cuyler (1742-1810), a strong Loyalist. During his stay, he drew this sketch of the mayor and his wife Jannetje Jacobse Glen (1733-1783).
André departed for Pennsylvania on 2 January 1776. From this point onwards, the fates of the drawing, André, Mayor Cuyler, and his wife rapidly diverged. André spent a year under house arrest in Pennsylvania, was exchanged, returned to the British army, was assigned to make contact with the traitor Benedict Arnold in 1780, was captured while returning to the British lines, and was sent to the gallows; he continued to draw until the last night of his life (see lot 32). Mayor Cuyler was arrested for his loyalist sympathies just six months later, escaped, made his way to Manhattan, and joined the British army as a colonel. Jannetje Cuyler remained in Albany for a year after her husband's arrest, then (as described on the verso of this drawing) proceeded "in an open boat down the Hudsons River 160 miles to N. York to join her husband." The Cuylers settled in Canada after the war, making occasional visits to Albany in an effort to recover their confiscated land.
The drawing itself had an interesting fate. When Jannetje Cuyler and her children fled Albany, she left the drawing with her brother John Glen (1735-1828), who remained in the Albany area. Upon his death, it went to his niece Elizabeth Cuyler Holt (1767-?) in Canada, daughter of Abraham Cuyler. She soon gave it to her brother Jacob Glen Cuyler (1775-1854), who in 1806 had gone to South Africa as an officer in the British forces which annexed the East Cape area. He remained in South Africa to raise a family in Uitenhage on the Indian Ocean, and became one of the leading figures in the British community there. After he received the drawing from his sister, he wrote a lengthy explanation of its history on the back of the frame in 1840.
References: Nicoll, "The Earliest Cuylers in Holland and America" (New York, 1912), pages 32 and 40, which provides a complete transcription of the 1840 description; Metrowich, "The Valiant But Once" (Cape Town, 1956), pages 37 and 52; Flexner, "The Traitor and the Spy: Benedict Arnold and John André" (Syracuse, NY, 1991), pages 137-8 (describing the relationship between Cuyler and André).
Provenance: Abraham Cuyler's son Jacob Glen Cuyler (1775-1854) as described above; his daughter Jane Elizabeth Cuyler Armstrong (1815-1893); her son Jacob Glen Cuyler Armstrong (1849-1932), who dropped the Armstrong name, and who owned the drawing in 1912 when the Cuyler genealogy was published; his son Jacob Glen Cuyler (1876-1959), who owned it in 1956 when the Metrowich book was published; by descent to the consignor. 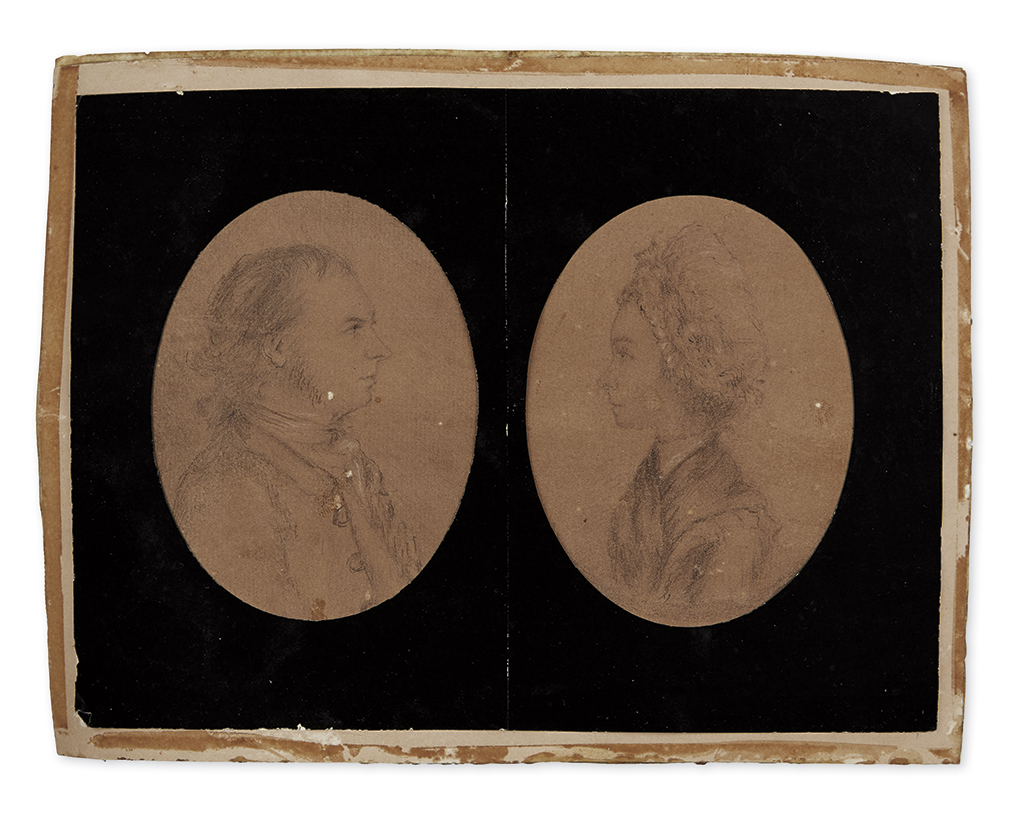