first edition of the extremely rare essays which helped turn the tide of the Revolution. The eloquence of the opening lines continues to resonate: "These are the times which try men's souls: The summer soldier and the sunshine patriot will, in this crisis, shrink from the service of his country; but he that stands it NOW, deserves the love and thanks of man and woman. Tyranny, like hell, is not easily conquered, yet we have this consolation with us, that the harder the conflict, the more glorious the triumph. What we obtain too cheap, we esteem too lightly."
Paine wrote the first American Crisis in spare moments while serving in the Continental Army as aide-de-camp to General Nathanael Greene. He later recalled "I began the first number of the Crisis . . . at Newark upon the retreat from Fort Lee, and continued writing it at every place we stopt at." It was published in the Philadelphia Journal on 19 December 1776, and then in pamphlet form four days later. Its bracing rhetoric was a much-needed jolt to the demoralized American army. As his contemporary James Cheetham wrote, "The number was read in camp, to every corporal's guard, and in the army and out of it had more than the intended effect. . . . Militia-men who, already tired of the war, were straggling from the army, returned. Hope succeeded to despair, cheerfulness to gloom, and firmness to irresolution" (Life of Thomas Paine, page 56). Within a week of the pamphlet's publication, Washington's night crossing of the Delaware turned the fortunes of the American army.
Paine issued several later numbers of the American Crisis, but some of them appeared only in newspapers. These first three are generally found together, when they are found at all. Edwin Wolf, in an article for the 1969 Papers of the Bibliographical Society of America, page 267, identifies two printings of the American Crisis I, II, and III, with several of the pages being reset. Wolf describes Part I as a second edition, and the partially re-set Parts II and III as second states.
This copy narrowly escaped destruction earlier this year. It had belonged to a collector from upstate New York. During the sorting of his estate, the American Crisis was placed in a box intended for the dumpster, but one of the heirs spotted it at the last moment.
Bristol B4551; Evans 14953,15493-4. One other copy, also this same second state, has sold at auction since 1955. 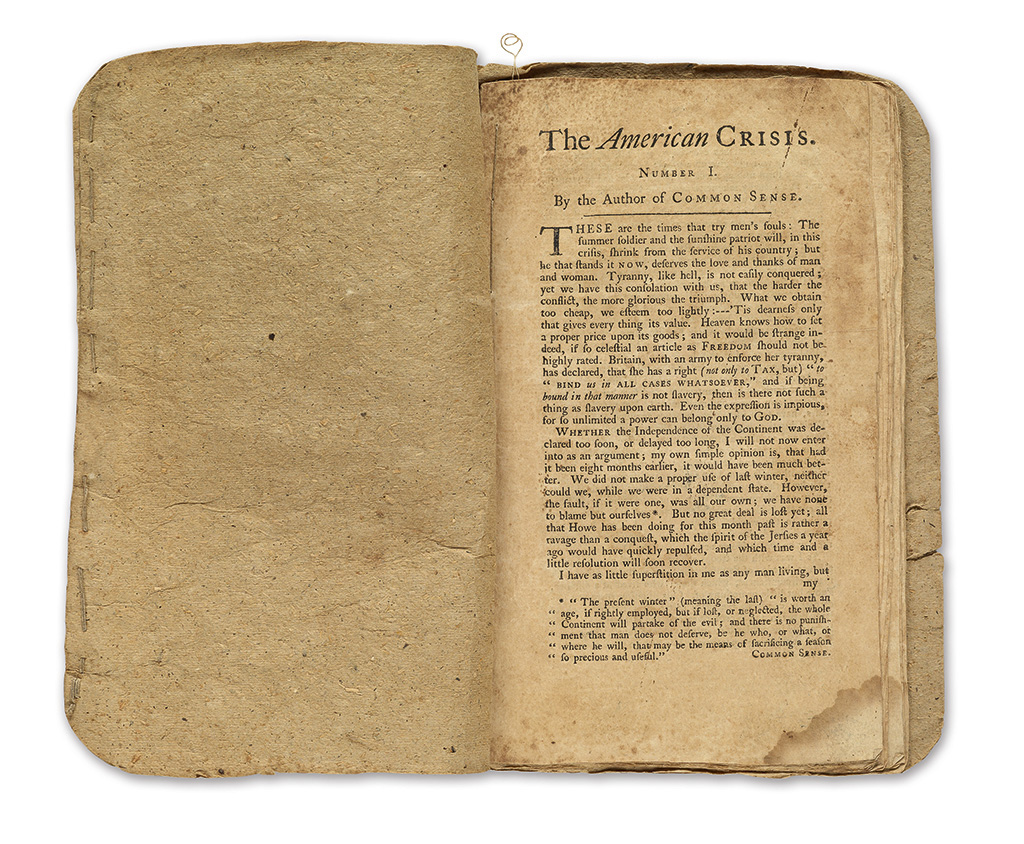