Manuscript diaries by identified American soldiers in the Revolution appear quite infrequently at auction; we are not aware of any other substantial examples in the past 20 years. This one includes dinners with General Washington, the retreat of the British at the Battle of Connecticut Farms, the night maneuvers on the Hudson River which led to the Battle of King's Bridge, appearances from Baron von Steuben, Governor Clinton, Benjamin Lincoln, Count Rochambeau, Henry Knox, and Alexander Scammell, rumors of Washington's peace negotiations in 1782, and finally the excitement over the proclamation of peace in 1783. It is accompanied by an original miniature portrait and engraved silver beaker, all from the estate of Buell's great-great-grandson.
John Hutchinson Buell (1753-1813) of Hebron, CT enlisted for the Lexington Alarm in 1775 . He kept this diary as a captain in the Connecticut Line. He later served in the peacetime army, reaching the rank of major. His diary begins with the Battle of Connecticut Farms: "We left the hutts at or nigh Morristown. It was in consequence of the enemy's being out at Springfield. The first night we got to Short Hills. Springfield was then in flames. The enemy retreted back to Connecticut Farms, which they also burnt." Captain Buell spent the next three years as part of Washington's undermanned forces which kept the British boxed in New York City. His regiment moved frequently between New Jersey, West Point, Dobbs Ferry, and Peekskill in response to British movements. He dined with Washington on 6 April 1781 and 2 May 1783. A grand reception for Count Rochambeau in 1782 stands out: "The American army was perraded in two lines from King's Ferrey to Gen'l Washington's marque, about 3/4 of a mile, and rec'd the Count Reosshambow. He rode through our troops to Head Quarters, the officers saluted him, the army then wheeled to the write and pass him and saluted him again."
Most dramatic is the night trip to King's Bridge, July 1781: "We consealed our boats till dark when Col. Scammell's detachment came down and imbarked. We went down to Dobbs Ferry, where we arived about sunrise in the morning. . . . We covered up our boats with bushes and consealed our men in the woods, where we remain'd till dark, when we imbark the men, soposed to be about 1200. Gen'l Linkin had the command. We preceded down the river and landed about 2 o'clock. In the morning of the 3d we landed the troops below Phipp's House and Spiting Devil, and return'd immediately with the boats to Tarrytown. The detachment went immediately acrost to Kings Bridg. They fell in with the enemy, had some smart skirmishes."
Provenance: Buell's daughter Gratia T. Buell Hollister (1802-1888); her son Henry Hutchinson Hollister (1842-1909); his son Buell Hollister (1883-1966); the estate of his son Louis Henry Hollister (1921-1997).
with:
Miniature portrait of Buell in uniform circa 1790s in a rose gold locket, watercolor on small oval of ivory set over hair woven in basket weave pattern, 2 1/4 x 1 3/4 inches; unsigned, but various authorities have proposed William Verstille, Edward Savage, or Isaac Sanford as the artist.
Silver beaker engraved "JHB", stamped twice with hallmark "AVV" (Alexander Vuille?) on bottom, 3 1/4 inches high, 3 inches across at lip, undated. Yale Art Gallery holds another beaker with a nearly identical pattern dated 1795, donated by another descendant of Major Buell.
A group of 4 publications discussing Buell, 1887-2004, including the 1887 pamphlet publication of the diary, "A Fragment from the Diary of Maj. John Hutchinson Buell."
NOTE: Buell's 1793 commission as major was signed by George Washington, and will appear in Swann's 26 November autograph auction. 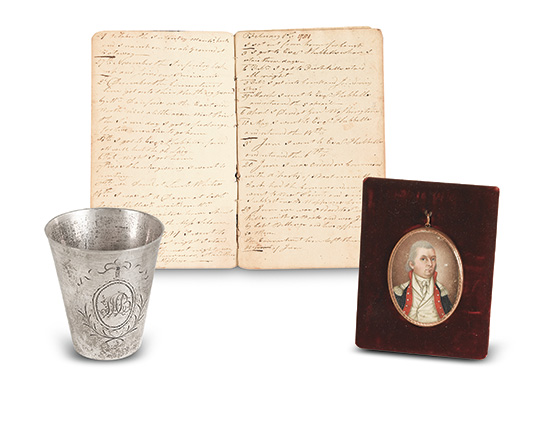