John Lowell (1743-1802) served in the Massachusetts legislature through most of the war, did a term in the Continental Congress, and was appointed by President Washington as one of the first judges on the United States District Court for the District of Massachusetts. Among his many notable descendants were industrialist Francis Cabot Lowell, and the poets Amy Lowell, James Russell Lowell, and Robert Lowell.
Most of this collection consists of Lowell's correspondence: 23 letters to Lowell, and 6 of his outgoing letters, mostly retained drafts. Highlights include: a letter from Lowell to his stepmother in 1766, reporting on his marriage A pair of letters from jurist Jonathan Sewell to Lowell, urging him to take young Levi Lincoln (future U.S. Attorney General) as law partner, 21 May and 15 June 1773 Retained signed draft of Lowell's letter to John Adams regarding the British ship Countess of Eglinton and merchant John Brown of Rhode Island, [4 August 1777] Letter from Thomas Colman to Lowell, reporting on an injustice committed against 61-year-old Capt. John Cox of Falmouth, MA, who was seized from his home by the crew of the privateer sloop General Wadsworth and confined for 24 hours in chains, 8 March 1781 Retained draft of Lowell's letter declining his recent election to the Continental Congress, 5 October 1782 Retained draft of Lowell's letter resigning his seat in the state Senate, explaining that he was in public service through the war "altho I found my health evidently declining by the joint pressure of public & private business. Whether I served my country to their advantage they must judge," November 1785 Lowell's draft letter to President George Washington, accepting appointment as a federal district court judge, on the fragment of an address panel addressed to Lowell, apparently unpublished, [15 October 1789] Pair of letters from son Francis Cabot Lowell, travelling in France and England, 11 December 1795 and 24 April 1796.
The other 11 documents in the collection include a certification of John Lowell to practice as an attorney before the Massachusetts Superior Court, May 1765 "The Memorial of the Subscribers Representatives of ye Town of Nbypt" [Newburyport], "praying aid towards the fortification of their harbour," manuscript draft, [May 1776] "Observations on the Constitution as to the Government's Power over the Militia for Gov. Bowdoin," manuscript draft regarding the 1780 Massachusetts constitution "Extract of the report of a committee to whom were referred the letter . . . from the Superintendant of Finances & the letter . . . from the Sec'y for Foreign Affairs," manuscript draft, docketed "referred to Mr. Lowell, Mr. Wharton, Mr. Clarke." [May 1782] Manuscript copy of the New York law "An Act to Explain and Amend the Act, entitled, An Act relative to Debts Due to Persons within the Enemy's Lines passed 12th July, 1782," 24 November 1784 and Lowell's untitled draft legal opinion beginning "Every neutral nation is bound to act fairly towards such belligerent powers as enter their ports & harbors for the purpose of trade," with a note explaining that it is a rough draft which may differ from "the decree filed in the District Court."
A small but rich collection of papers relating to an important figure of the founding generation, including substantial draft letters to Washington and Adams. A complete list is available upon request. 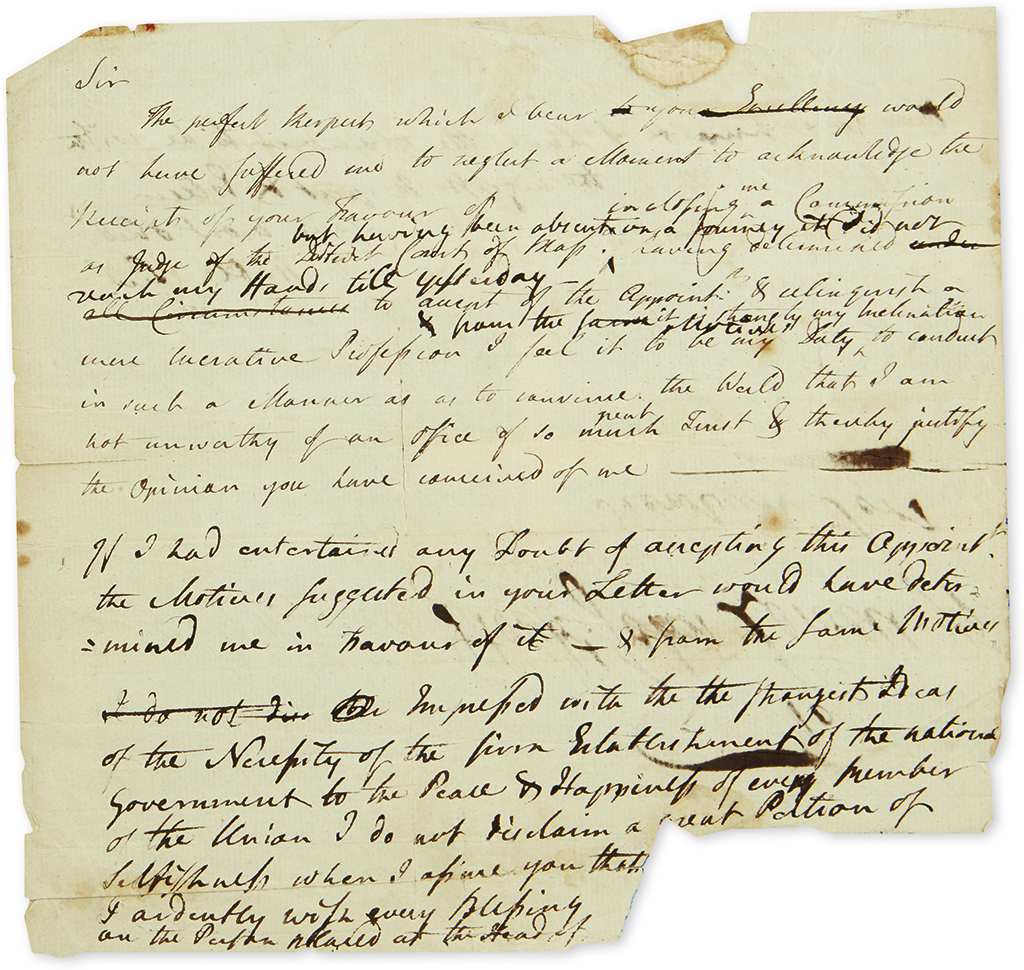