Offered here is the pay order for an express rider from Massachusetts to the Continental Congress, carrying vital military intelligence--and possibly news of the Massachusetts Declaration of Independence.
On 3 May 1776, the Massachusetts legislature reported: "A letter from the Committee of Salem, by Express, informing the Court that they had received Intelligence that a Fleet of sixty Sail Transports under Command of Lord Howe, having on Board 12,000 Hessians, together with twenty-seven Commissioners, were spoke with at Sea, and bound to Boston; and that General Burgoyne, with four Thousand Hanovarians, was going to Quebec." Recognizing the importance of this news, they immediately ordered the news sent to the Continental Congress, as well as neighboring governors and General Washington, and decided "to employ Express to carry such Letters." That day, the present order was signed to pay Jonathan Park £12 "to enable him to defrey his Expences going express to Philadelphia."
Other express riders took about 5 days to complete the Boston-Philadelphia route, so Park was probably at Congress with his news by 9 May. His news of Hessian troops may have influenced the 15 May "Resolution on Independent Governments," an important step toward the national Declaration of Independence: "The whole force of that kingdom, aided by foreign mercenaries, is to be exerted for the destruction of the good people of these colonies." We have proof that Park reached Philadelphia before May 16, 1776. On that date, we know John Hancock wrote a response to the Massachusetts Assembly, responding to their war news with his own rumors gathered in Philadelphia: "The British nation have proceeded to the last extremity, and have actually taken into pay a large number of foreign troops." He concluded his letter with a postscript: "I have advanc'd Mr. Jona. Park the Express Twelve dollars, which I have charg'd to the province."
The week of Jonathan Park's ride to Washington was momentous in the history of the Revolution. On 1 May, just two days before his ride, the Massachusetts council passed
a de facto declaration of independence, removing the King's name from its official documents. We don't know how the news of this momentous decision made its way to Philadelphia. If it hadn't already gone out by the continental post or by another express rider, it's quite possible Park might have also carried his news to the Continental Congress as well.
This document, completed on a printed form for the "Colony of Massachusetts-Bay," was signed by several notable early patriots. Perez Morton (1751-1837) later served for many years as the state's Attorney General. Among the representatives who also signed this document were James Otis Sr. (1702-1778), future governor James Bowdoin (1726-1790), Harvard professor John Winthrop (1714-1779), and future Congressman Samuel Holten (1738-1816).
with--a printed volume containing the legislature's order to send an express rider: A Journal of the Honorable House of Representatives . . . of Massachusetts-Bay. 322; 200, 221-277 pages as issued. 2 volumes in one. 4to, modern small folio (11x8 inches); first 6 leaves defective with loss of a few words and conserved, intermittent dampstaining and foxing, intermittent worming (heavy in second volume). [Watertown and Boston, MA: Benjamin Edes, 1776]. The first volume begins during the Siege of Boston, with very frequent mention of General Washington and other military matters. The British evacuated Boston on March 17, 1776. Two days later, the House passed an order to secure a list of Loyalists remaining in the town, and the next day they addressed the Boston's smallpox epidemic. Paul Revere is mentioned at least twice, once with his appointment as major on page II:106, and the other when he was replaced on page 275. Most notably, it contains the documentation of the express ride to Philadelphia on pages II:238-9, quoted above. 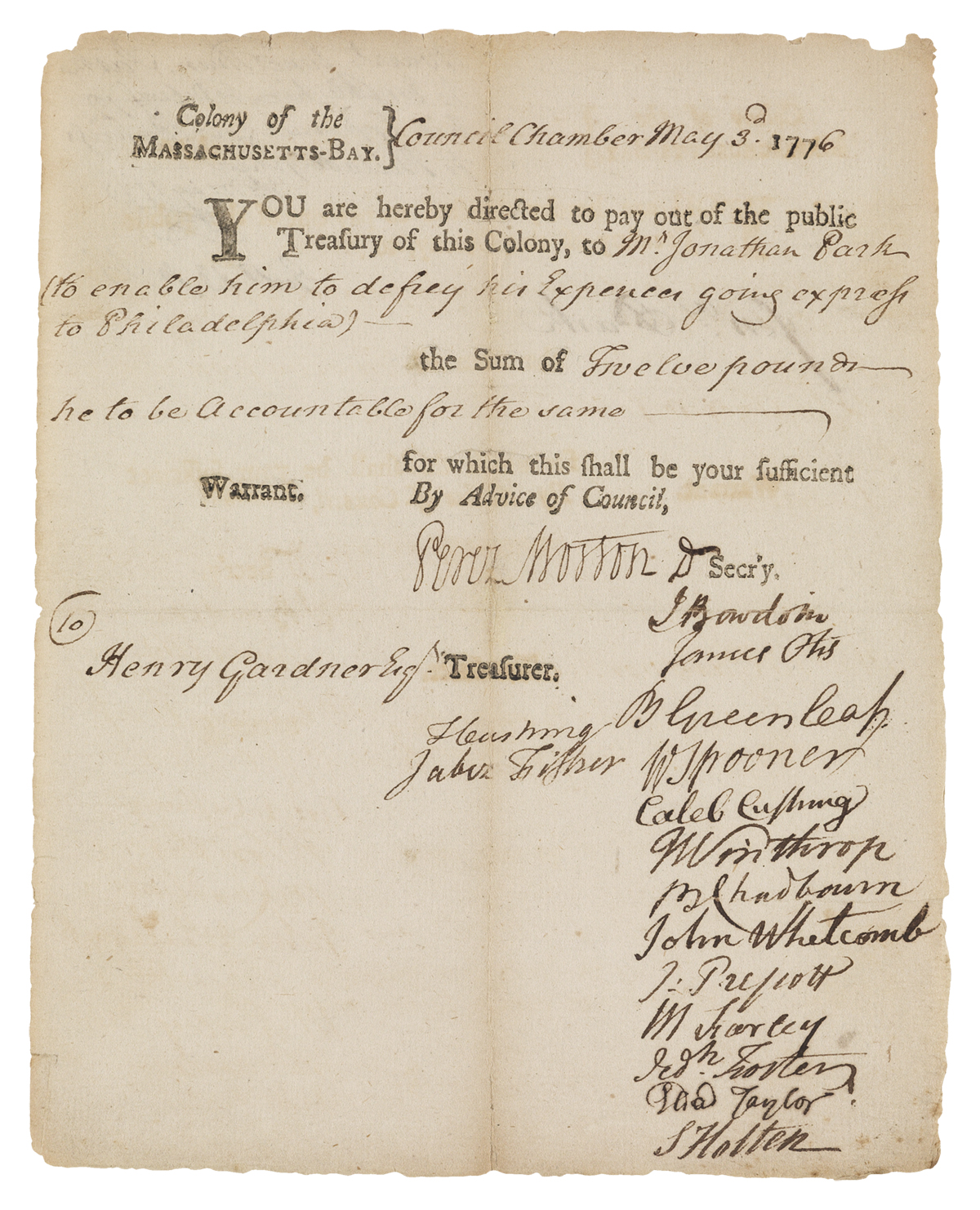