In 1775, Falmouth was a sprawling township in the northern section of Massachusetts which would soon become known as the District of Maine. The most populous section of Falmouth was "the Neck," which would be broken off as the city of Portland ten years later. Falmouth Neck was the site of considerable revolutionary action, including "Thompson's War," a standoff between the Royal Navy and a patriot militia in early May 1775. The present document was written in Falmouth shortly afterward to ensure loyalty among the "several hundreds on ye Neck."

"Agreeable to a resolve of our provincial Congress on the 8th of May ult'o, the Committee of Correspondence in this town, in order to know who are enemical to the rights of mankind and the interest of America, having proposed the following declaration of agreement to be sign'd by the inhabitants thereof, we the said inhabitants do heartily & cheerfully subscribe the same, viz:

We solemnly and sincerely declare that it is our opinion that the ministry of Great Britain and the Parliament have of late invaded the constitutional rights and liberties of this country by prosecuting their avowed design of raising a revenue here without our consent, as well as arbitrarily infringing our charter, and altering the civil government of this province, and therefore, to prevent a state of slavery, do sincerely and heartily agree and engage to do our utmost to carry into execution whatever measures have been or may be consistently recommended by the Continental and our provincial congresses for the purpose of opposing and frustrating those evil designs and for the preservation of our happy constitution, until a reconciliation between Great Britain and America upon constitutional principles can be obtained, which God grant may be speedily brought about, and that we will readily and heartily join our countrymen on all occasions in defence of our said rights and liberties as we trust our cause is righteous, and that we may succeed. We shall endeavor to oblige all persons to pay due obedience to the general resolves of Congress in particular, one for the regulation of the militia, to obey the orders of the several military officers who have been or shall be elected by the several companies and regiments, agreeable to the resolves of Congress, and to preserve peace and good order among ourselves and safety to the lives and properties of every individual among us."

This is not the original petition with signatures. Added in a different hand is a note: "This was signed by several hundreds on ye Neck, indeed all but the Custom House officers, Mr. Pagan, who gave ye committee a very handsome letter in excuse, and Mr. Courning[?], and I don't recollect any body except those who have left us. This method was agreed upon by ye committee to find out who were enemies, as the presumption was that those who were Tories &c would not sign it."

Similar resolutions were passed in other New England towns during these early months of the Revolution, but this Falmouth resolution does not seem to be published. 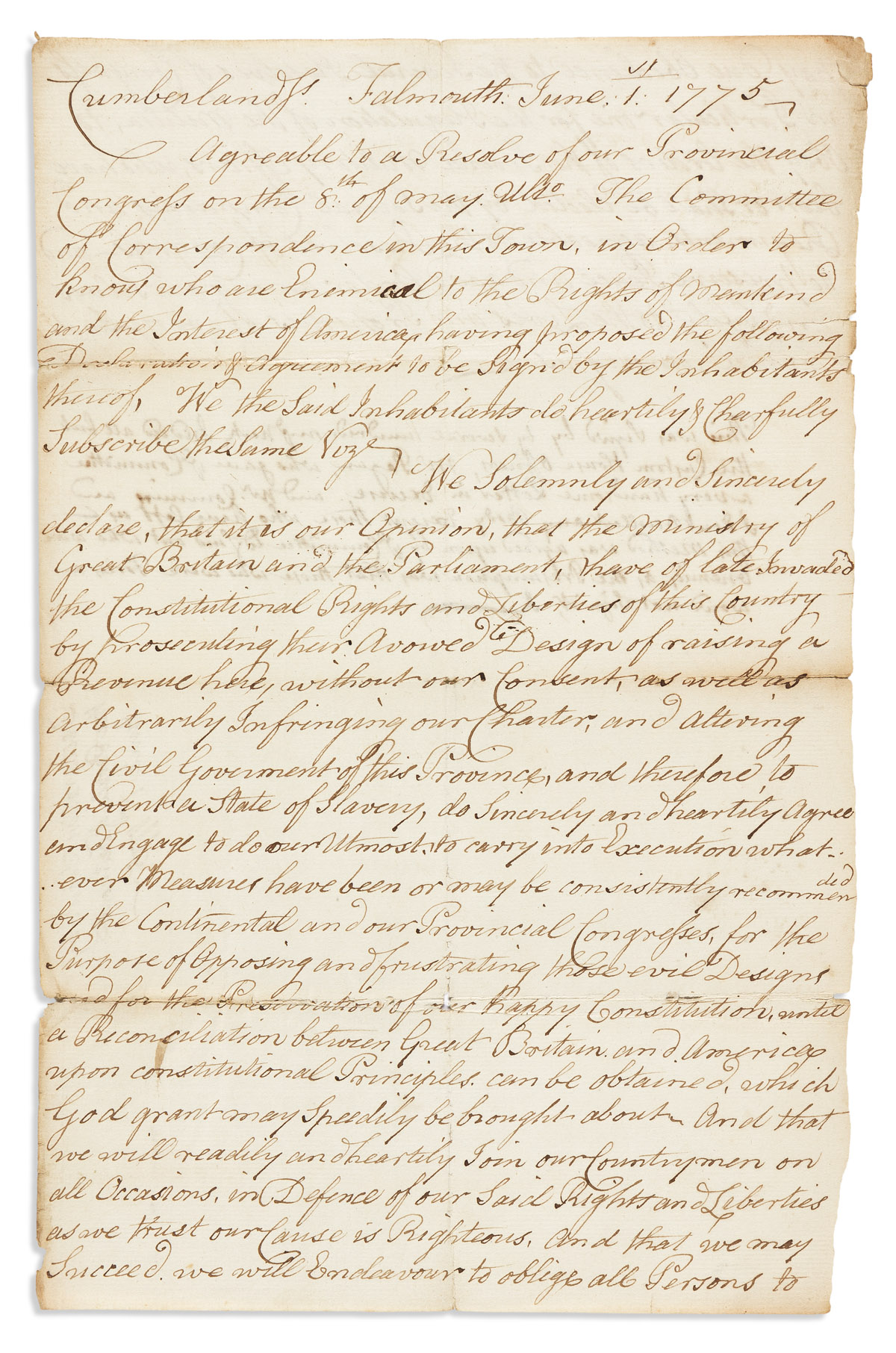