Paschal Nelson Smith (circa 1740s-1805) came from an elite Long Island family and brought some powerful contacts to his mercantile career. Upon his marriage to Hester Sears, he entered into a mercantile partnership with her father, Manhattan merchant Isaac Sears (1730-1786)--one of the city's most active and outspoken revolutionaries. In September 1776, Smith relocated to Boston, where most of these letters were written. During the revolution, Smith acted as an agent and part-owner of several privateers.
Among Smith's notable correspondents in this volume were leading American generals Benedict Arnold, Horatio Gates (twice), Henry Knox (twice), Israel Putnam, Baron Von Steuben (twice), and John Sullivan. He wrote to Arnold on 9 December 1778 regarding the delivery of a trunk to Arnold's sister. He politely declined Gates's recommendation of a captain Smith as privateer captain on 7 June 1779. To Knox, he wrote of Boston's weak defenses on 6 September 1779: "No kind of preparation is made to defend the town & harbour & what is still worse, I see no prospect of anything being done, unless His Excellency Genl. Washington & you gentlemen of the army can rouse our councill. I will not attempt to describe our unprepared situation . . . I think it should stagger your faith." He tried talking military strategy with Knox on 30 August 1780: "I join in opinion with you that it would be a mad piece of business to attempt a seige against New York and I imagine there is but little prospect of the enemy's quiting their strong holds and giving you an opportunity of meeting them in the field." New York politician, militia general and Declaration signer Lewis Morris was a regular correspondent; Smith wrote him six letters, mostly concerning the purchase of horses. Lewis Morris Jr. appears to have been an old friend. Smith wrote him about the exposure of Benedict Arnold on 9 November 1780: "I am much obligd for the information you gave me of Arnold's villiany. He is now sunk beneath the possibility of rising again & as his name is become the most odious in this world to every honest man."
The frequent letters to father-in-law and business partner Isaac Sears are among the most interesting. Smith comments on Sears's military service. Just before the Battle of Rhode Island he wrote: "I this morning had the pleasure to hear by Major Franks that you was on board his Excellency Count d'Estaing's fleet off Road Island and that you was very well. . . . I most heartily wish you success in the attack of Rhode Island and think the force that is going against it is so formidible, it must be carried" (5 August 1778). When the plan fell through he wrote: "The French fleet leaving Rhode Island is a matter of astonishment to every body & I believe the officers will be cooly received here. I fear the event of the expedition" ( 26 August 1778).
What makes this volume most valuable to researchers is probably the extensive discussion of the fleet of privateers under Smith's purview. A large portion of the letters, especially from 1778 and 1779, are to privateer captains and investors. The Brig General Arnold wrecked off Plymouth on Christmas of 1778 with the loss of most of their 105-man crew, prompting a letter to Mssrs. Watson & Spooner, 4 January 1779, thanking them for the "list of the names of the men sav'd out of the wreck of the brig Genl Arnold, which I am glad to find is larger than we were at first informd." The same day he wrote Captain James Magee: "I was exceeding sorry to hear of your great misfortune, but was very glad to hear you escap'd with your life. . . . The owners of the brig approve your conduct & think you have done every thing in your power to save the vessell & preserve the lives of the people." He wrote to John Grenell, 28 October 1779, about a rumor from a French ship that one of their privateers had been nearly lost at sea: "the storm on the 16th had carried away from her mizen mast, hove over 8 of her guns & her anchors. He does not recollect the captain of the ship's name, but thinks the latter was the Mars & as it is likely that it might be her, I would not have you purchase any part of her for me after receipt of this."
This volume was microfilmed in 1966 while still in private hands, and the microfilm has been used as an important source on the war by numerous historians. Additional notes are available upon request. 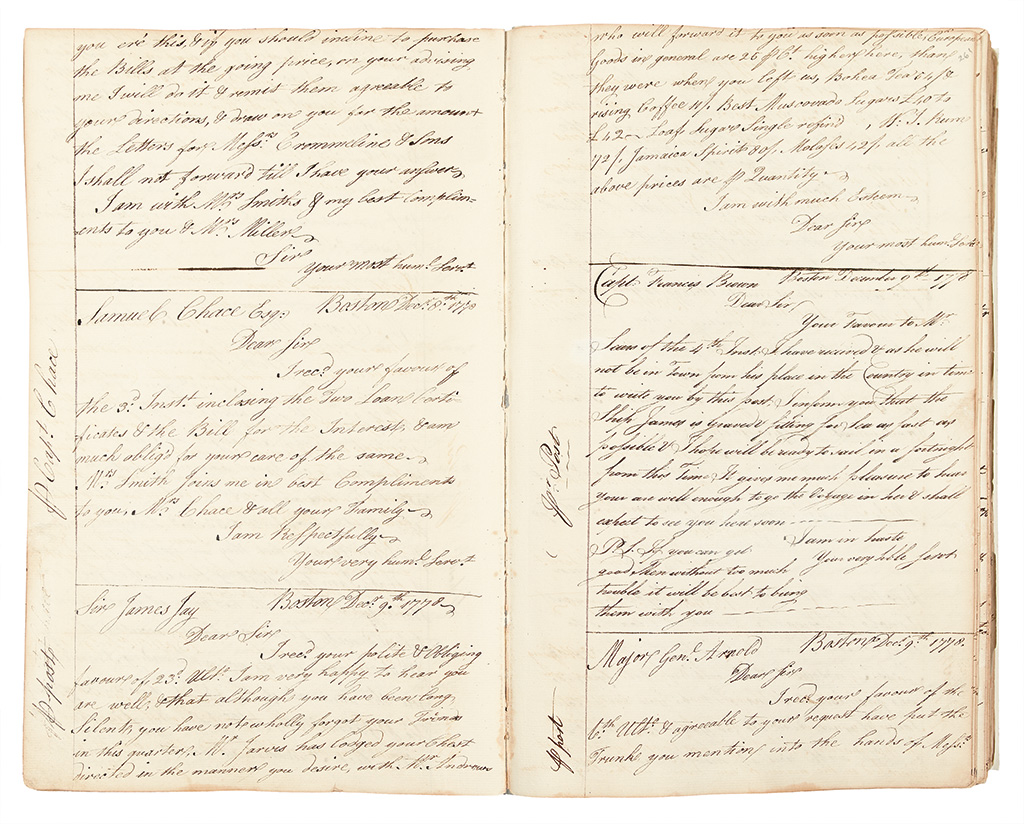