These remarkable watercolors were created early in the Revolution by St. John Honeywood (1763-1798), then a boy of about 14 years old, who had twin obsessions with art and the patriot cause. He was raised in Leicester, MA, about 32 miles west of Concord. His father was a physician who had died at Ticonderoga in 1776, leaving him an orphan to be raised by his aunt in Leicester. He was soon sent off to study at Yale College in New Haven, CT, home town of the engraver Amos Doolittle. Honeywood may not have been able to readily afford Doolittle's recently published views of the Battles of Lexington and Concord, but as an aspiring artist he may have secured access to them and made these copies for his own edification. He was known as an artist at Yale; his 1779 drawing of classmate George Welles was later engraved, and his 1780 pencil sketch was later used to illustrate the collected works of his college president and mentor Ezra Stiles. Honeywood graduated from Yale in 1782 and became a successful lawyer and political figure in Salem, NY. A volume of his poems, which also alludes to his artistic endeavors, was published posthumously in 1801.

A similar set of Honeywood's renditions of these prints, but in poor condition, was given to the Bangor Public Library in 1913. He signed one of those as "J. Honeywood pinx't. AEtat 14," suggesting that it was drawn in 1777 or 1778. They are discussed in Ian Quimby's seminal article, "The Doolittle Engravings of the Battle of Lexington and Concord" (Winterthur Portfolio, 1968:4, page 96). Quimby describes the Bangor set: "Although crude, they possess a curious attention to detail and felicity in handling the human figure that is lacking in the Doolittle prints." The present set is different in many details, but similar in style and artistic quality, suggesting that it was done at approximately the same time. Oddly enough, the present drawings are each signed "J Honeywood, sculp," suggesting that Honeywood was the engraver rather than the artist--quite impossible for a group of original drawings. He was apparently imitating Doolittle's "sculp" in the source images.

Plate I, "The Battle of Lexington, April 19, 1775," follows Doolittle's original composition quite closely, and reproduces his title and caption text almost verbatim, although some of the patriots in the foreground to the left are here out of scale. This plate is the only one from Honeywood's Bangor Library set which is reproduced in the Quimby article. In the Bangor example, Honeywood has compressed the composition to fit a nearly square sheet, but here he has retained the original proportions.

Plate II, "A View of the Town of Concord," is probably where Honeywood took the greatest liberties with his source material. His handling of perspective is not on par with Doolittle's--the gravestones are shown here facing directly to the viewer in straight lines, and the windows in the building at left don't quite line up. He has, however, added compelling detail to three of the gravestones, making them almost legible--a skull and crossed bones are clearly visible in the central stone. Honeywood's handling of the figures in the foreground, Colonel Smith and Major Pitcairn, is much more realistic and detailed than Doolittle's naive treatment. While it's unlikely that Honeywood had any special knowledge of their appearances, he may have worked from models to present this pair as fully realized individuals. Quimby notes that in Honeywood's depiction, "Colonel Smith is shown as the fat man we know him to have been, standing in a pose familiar from the conversation pieces of the day. This is in marked contrast with Doolittle's treatment of the same figure, which is a mere caricature of a man." Major Pitcairn's spyglass is here marked "London."

In Plate III, "The Engagement at the North Bridge in Concord," Honeywood makes no effort to replicate Doolittle's treatment of the sky, and has reconfigured the farm field in the foreground. The essential details of the battle scene remain the same, though, with a row of British Regulars at the right of the bridge covering an orderly retreat by their comrades as the "Provincials" prepare to cross in pursuit.

Finally, the dramatic Plate IV is "A View of the South Part of Lexington," showing houses consumed by flames as the British destroyed supplies prior to their retreat. While the mismatched size of the British troops in the field cannot be blamed on Doolittle, Honeywood's treatment of the patriots firing behind the stone wall in the foreground is probably an improvement.

Provenance: the renowned New York and Vermont Americana collector Hall Park McCullough (1872-1966), who exhibited them at the Bennington Museum, April 1975; Keno's McCullough sale, 1 May 2010, lot 271, to the consignor. 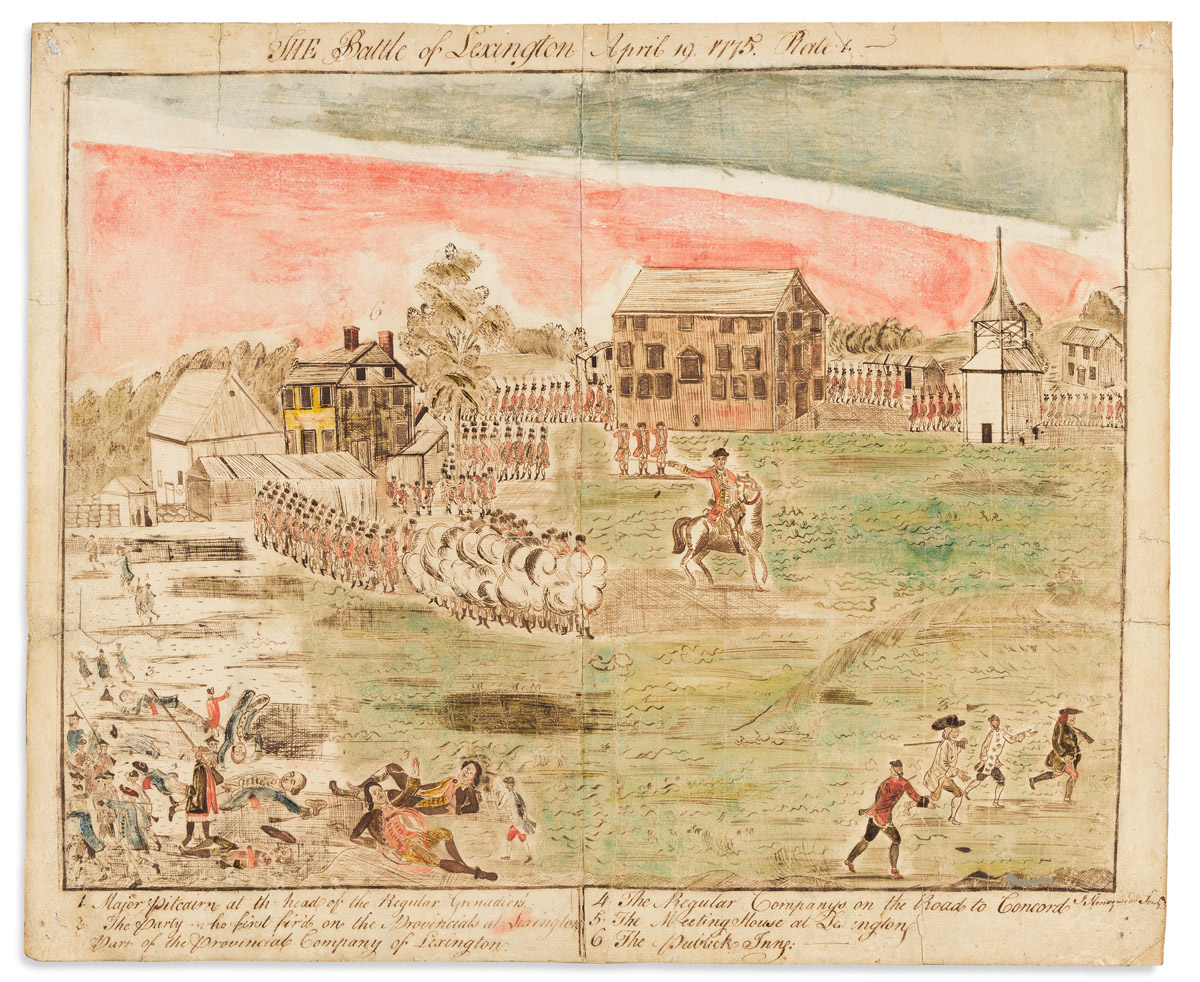