first separate edition, first state of the rare essays which helped turn the tide of the Revolution. The eloquence of the opening lines continues to resonate: "These are the times which try men's souls: The summer soldier and the sunshine patriot will, in this crisis, shrink from the service of his country; but he that stands it NOW, deserves the love and thanks of man and woman. Tyranny, like hell, is not easily conquered, yet we have this consolation with us, that the harder the conflict, the more glorious the triumph. What we obtain too cheap, we esteem too lightly." Paine wrote the first American Crisis in spare moments while serving in the Continental Army as aide-de-camp to General Nathanael Greene. He later recalled "I began the first number of the Crisis . . . at Newark upon the retreat from Fort Lee, and continued writing it at every place we stopt at." It was published in the Philadelphia Journal on 19 December 1776, and then in pamphlet form four days later. Its bracing rhetoric was a much-needed jolt to the demoralized American army. As his contemporary James Cheetham wrote, "The number was read in camp, to every corporal's guard, and in the army and out of it had more than the intended effect. . . . Militia-men who, already tired of the war, were straggling from the army, returned. Hope succeeded to despair, cheerfulness to gloom, and firmness to irresolution" (Life of Thomas Paine, page 56). Within a week of the pamphlet's publication, Washington's night crossing of the Delaware turned the fortunes of the American army.
It appears that the early numbers of American Crisis were first issued individually by Philadelphia printers Styner and Cist. Probably soon after the third number was released, the publishers printed additional copies of Numbers I, II, and III together, partly from the same settings of type but with a few changes. Edwin Wolf's article for the 1969 Papers of the Bibliographical Society of America, page 267, identifies some of the variations between the two printings, most notably the addition of the date at the base of page 8. He describes the Number I seen here as a first edition, and the partially re-set Number II as a first state. The second collected state seems to be somewhat more common, and thus most extant copies have Numbers I, II, and III bound together. This copy is offered without Number III, suggesting that the first state numbers may have been issued individually. The title page of the Number II offered here has a different wear pattern than the final pages of Number I; they were apparently separate pieces before being bound together circa 1832.
This copy has unusual provenance. Its wrappers are made from a partial advertising broadside for the books "The Effects of the Principal Arts, Trades, and Professions" and John Bell's "On Baths and Mineral Waters," both published in Philadelphia in 1831. A note on the rear wrapper suggests that the binding took place in 1832. The owner at that time was Thomas Wallin (1754-1835) of New Jersey. The book was found among papers of his granddaughter Margaret Wallin Ivins McKean (1806-1886), a Mormon convert who remained in Toms River, NJ through 1880. She died in Salt Lake City in 1886. The next known owner was Donald Drake (1907-1991), who had acquired a box of McKean family papers before he moved to Mount Pleasant, UT in 1976. He left the papers in the corner of a garage on his sister's property. Upon his death, the papers were inherited by his wife Marciel Everts Drake (1929-2015), who apparently did not know of their existence. They then passed to her sister Joan Everts Varah and her husband Lynn Varah (the property owners), who nearly disposed of the mass of decaying old papers before unearthing the American Crisis and realizing its importance. Bristol B4551; Evans 14953, 15493. For Number I, ESTC records 4 copies of the first state and 12 copies of the second state. This is the first example of the first state at auction since Parke-Bernet's de Coppet sale in 1955; Swann sold a second state at our 25 November 2014 sale, lot 23. 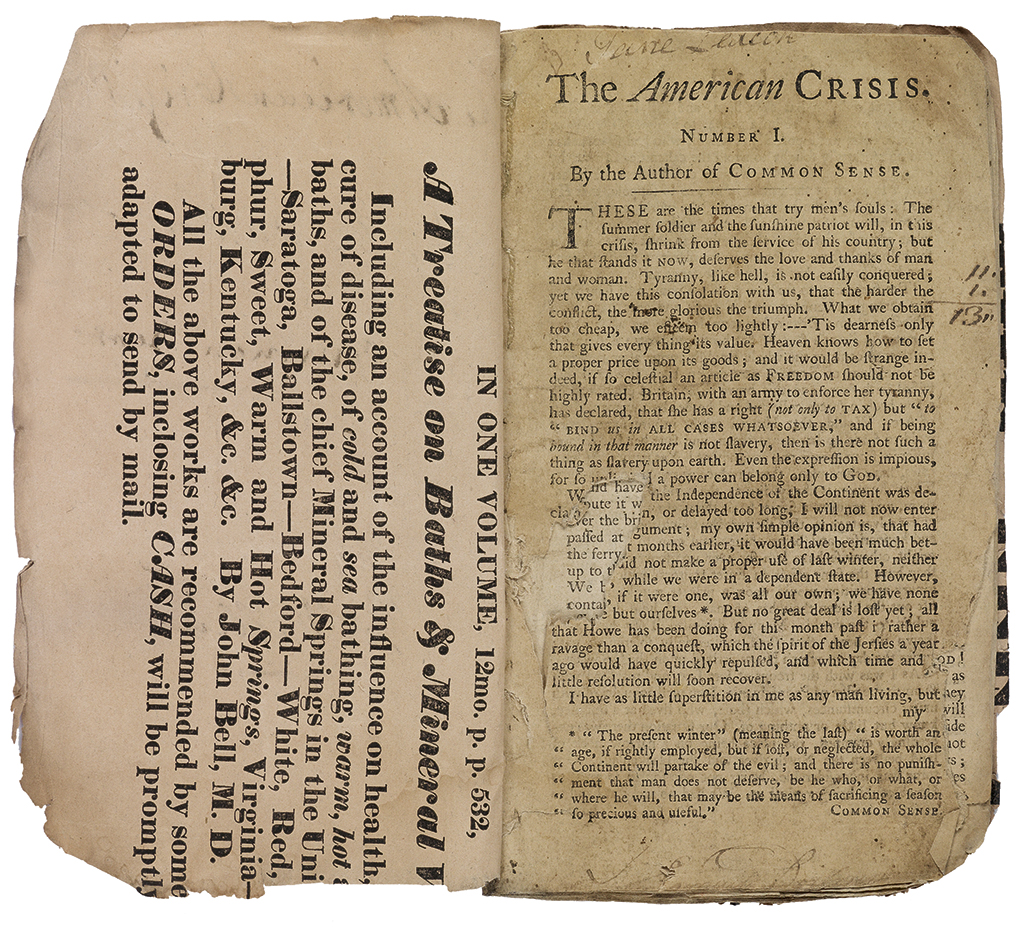 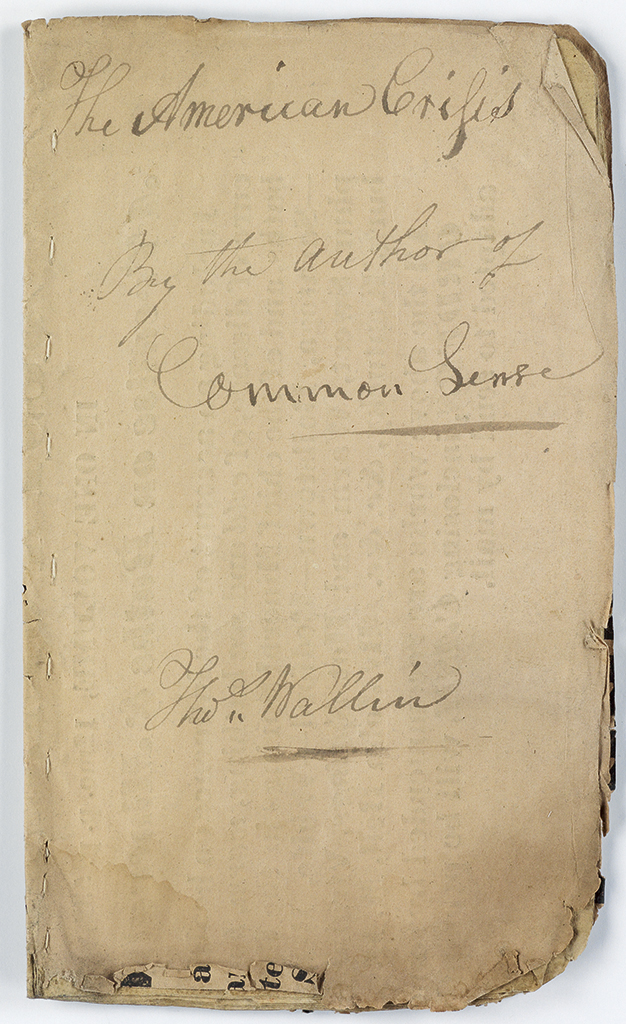