Substantial diaries by soldiers in the American Revolution are rarely seen on the market. We know of no other diaries at auction which were kept in the hellish British prisons in New York. This one was written on the rear pages of a slim memorandum book which the officer had with him upon his capture. Worn and stained but almost entirely legible, it bears testament to harsh conditions. It has been published, but apparently only in two obscure genealogical publications circa 1985. The memoranda in the front of the volume also provide powerful testimony: recruitment records of a militia company raised on the eve of the Declaration of Independence, which went on to hard duty in the New York campaign.

Jeremiah Beard Eells (1732-1815) of New Canaan, CT was a shoemaker and local official. At the start of the war, he was married and had fathered 11 children; two more followed in late 1775 and in 1780. He volunteered as an ensign, first in June 1776 with the 5th Connecticut State Regiment under Colonel Philip Burr Bradley, serving in the Continental Army's fall New York campaign; and then in 1777 with the 9th Regiment of Connecticut Militia.

This diary begins with the capture of Eells and 13 companions on 14 March 1777, apparently in a small British raid on Norwalk, CT. By this point, thousands of American soldiers had already either died in prison or been released in a skeletal near-death condition, so Eells was likely nervous about what was to follow. The prisoners were "carried on bord the Speadwell & put in the hole," shipped across the Long Island Sound to Huntington, NY, and arrived in British-held Flushing on the 17th. At that point imprisonment did not seem a dire fate: "Went to Governors Brown where we rec'd wine and vittuals & was well treated & then had a house provided & two beds for 5 of us & on the 18 day Gov. Brown sent us a flask of rum & a ham of veal & we was well used."

Three days later they arrived in Manhattan, where they were locked up in one of the three infamous sugar warehouses the British were using as prisons: "Sent to the sugerhouse under guard & a very stincking place & there was 91 prisnoers before we got their." The sugar houses sometimes saw as many as 15 deaths in a day due to malnutrition and disease; Ensign Eells mainly noted the cold. On the 24th he wrote "we had no blankit & a cold night." The treat of some smuggled tobacco and rumors of prisoner exchanges are recorded. On 14 April he wrote "We had a number of prisoners brought in, taken at Bound Brook in the parleys." The patriot defeat at the Battle of Bound Brook in New Jersey had taken place the day before.

After 24 days in the sugar house, Eells and some of his fellow officers were transitioned into parole arrangements, living in the community, and even receiving payment for their labor. Eells's experience as a shoemaker proved handy. On 15 April, he wrote "Taken out by David Tomson to work at my trade . . . & got me a shirt & Tomson let us have 45 in money." On 26 April he found lodging at the home of noted patriot Hendrick Wyckoff in New Lots (now East New York, Brooklyn). On 30 April he learned that the British had burned a town in his native Connecticut: "Got nues that the regolers had ben to Danbury." Smallpox broke out where Eells was quartered on 1 May, and he was promptly inoculated by Dr. Daniel Menema, a local patriot. He nonetheless contracted the disease, but recovered within a month. Twice he received small sums of money via the Continental Army's prisoner agent Lewis Pintard. The diary ends on 24 November.

The diary occupies the last several leaves of a memorandum book kept by Eells; the earlier pages are interesting in their own right. Several of the entries relate to the first months of his Connecticut militia company in 1776 and early 1777, when they went on active duty in the New York campaign. One page lists the payments he received from 25 June to 5 July 1776 "rec'd of Capt. Sam'l Keeler for the purpose of enlisting soldiers," followed by sums paid out "for the premium of equipage of soldiers." £4 is paid out to one Sarah Comstock, presumably for supplying blankets or uniforms; 8 recruits are paid extra for having to find their own blankets, while one sum was "paid to Ebenezer Hickson for the premium of a blankit that Henry Wiat caried in servis." On another page is a list of soldiers in Eells's company and date of enlistment, from June through September 1776. Spanning 3 pages are the signatures of the company's troops in June and July 1776 "in full of our bounty and first month wages for the ensuing campaign." 38 men are named. One page shows Eells charging 6 of his soldiers for shoes or shoe repair, which he was apparently doing in his free time; one soldier covered the cost of his new soles when he "paid for rum that we drank at Harvey's in York." Two other payments were made on this page in Bucks County, PA, on 20 and 25 December 1776, where the Continental Army had recently retreated. A page of faded and worn partial accounts on the inside rear wrapper show payments made at encampments such as Morristown, Phillipsburg, and Ramapo.

Several memorandum pages date from the period of Eells's imprisonment. On the verso of the final diary page is an insignificant-looking memorandum dated 15 April 1777, representing Eells's first work outside the sugar house: "Rec'd of David Tomson in cash, 0:19:6 . . . by 1 lb of bread 0:1:0." After weeks in prison, that bread must have been well appreciated. A running account with his host Hendrick Wyckoff extends over two pages, with Eells making shoes for him, his wife and "Nat" and "Phillis" (presumably servants); on the credit side are cider, grog and bitters provided to Eells. This account extends through 30 November 1778, suggesting his parole in Brooklyn lasted for a full year longer than his diary extends. Several similar brief entries for boarding with Jacobus Cornell of New Lots in December 1778 also relate to his time in Brooklyn. Finally, a handful of entries relate to Eells's personal work as a shoemaker, or in serving writs as a justice of the peace, back in New Canaan.

References: Earnest Edward Eells, "Eells Family History in America, 1633-1952" (copy included), pages 51-56, including background information and a full transcript of the diary; the transcript also appeared in an issue of the Eells Family Association Bulletin circa 1985. Also see Worthington Ford's 1893 article "British and American Prisoners of War, 1778," which confirms that Eells and his compatriots were captured in Norwalk, CT on March 14 1777 and were still in Brooklyn on parole in 1778. 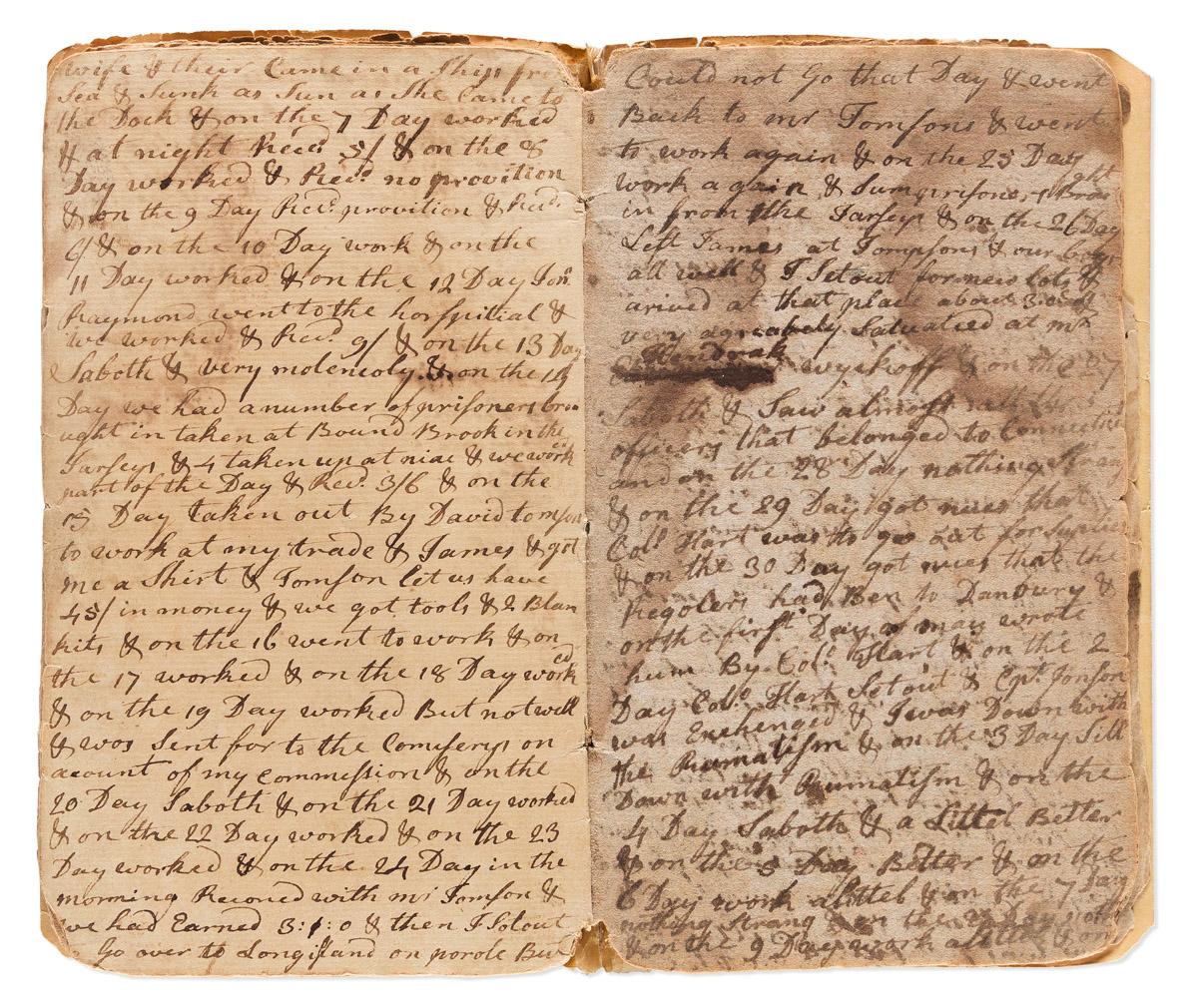