This volume tracks medical treatments aboard Continental Navy vessels from 1777 to 1782. It was kept aboard at least two vessels, by at least three different surgeons, and lists dozens of sailors along with their ailments and treatments. Primary source material relating to the Continental Navy is scarce. While lists of the army's officers and enlisted men are readily available, there is no comparable resource for the navy. Ship's records often sank with their ships, or were cast overboard if in danger of capture. Medical records kept aboard these ships are even more ephemeral.
The earliest record in this volume is a prescription book dated 16 December 1777 to 25 April 1779, filling 36 pages. The author was apparently a Dr. J. Howard, who signed a brief note on 4 April 1779: "I have been unwell for several days past." Most of these entries do not list patients, only treatments in Latin, often with several entries per day. However, this physician dealt with a smallpox outbreak in March and April 1778, and breaks into English to describe the deaths of 6 men: Dimpsey Larcey, boy; Ephraim Hansen, sailor; Mr. Odehorne, master's mate; Leonard Hall, gunner's mate; John Shae, quartermaster; and Case, a sailor. For example: "Leonard Hall, gunner's mate, died in the 11th day of the eruption. Twelve hours before death his pulse sensibly decreased with evident symptoms of a fatal & most speedy determination to his breast, in consequence of which a suffocation ensured" (17 March 1778). A smallpox outbreak affected several ships during this period. Maddeningly, we have not been able to trace any of these men, Dr. Howard, or their ship--but it was clearly a privateer or naval vessel.
In another hand at the back of the volume is the "Sick Journal for the Continental Frigate Deane" for 17 June to 30 July 1779. This was apparently the Deane's second cruise, having first set out in January 1779. This section lists the crew members under the surgeon's care each day, their disorder, symptoms, medicine prescribed, and result. "D" apparently means discharged, and "DD" must mean deceased. For example, William Boardman was admitted on 26 June. On 30 June, he was reported with "difficulty of breathing & coma," on 4 July had "very low pulse, coma & delirium," on 5 July was simply "very bad," and the next day was "DD." We have not identified the author of this section, but the handwriting is distinct from Dr. Howard's earlier entries.
The volume was then passed on to Pierre St. Medard (1755-1822), a young surgeon's mate from France. His first service had been aboard French slave ships bound for St. Domingue slave ships from 1774 to 1778. After being captured and released by the British, he then gave his loyalty to the American Revolution, serving as a surgeon's mate aboard the frigate Providence in June 1779, and then in November moving to the frigate Deane, gaining a promotion to chief surgeon in October 1780. St. Medard's first entries were in a 10-page "Sick Journal for the Continental Frigate Deane" from 20 November 1779 to 10 February 1780. The recent immigrant carefully copied over the previous surgeon's title and followed his format, but kept his log in French. Several of his patients were either noted as "negre" or had distinctive names such as Pompe Crook suggesting a history of slavery. St. Medard's other entries include a 2-page "Sick Journal for de Deane," 18 August 1780 to 8 January 1781 five 2-page inventories of medicine aboard the Deane when it left port, February 1780 to April 1782 and 4 pages of post-war memoranda dated through 1788.
Bibliography: J. Worth Estes's "Naval Surgeon: Life and Death at Sea in the Age of Sail" (Canton, MA, 1998) is a biography of Dr. St. Medard, and discusses portions of this manuscript journal on pages 20-22. See also St. Medard's papers covering his later career (lot 177) and Andrews family papers descended through his stepdaughter (lot 91). Provenance: Peter St. Medard; by descent to Elizabeth Blaisdell Andrews (1911-2004); and purchased from her estate. 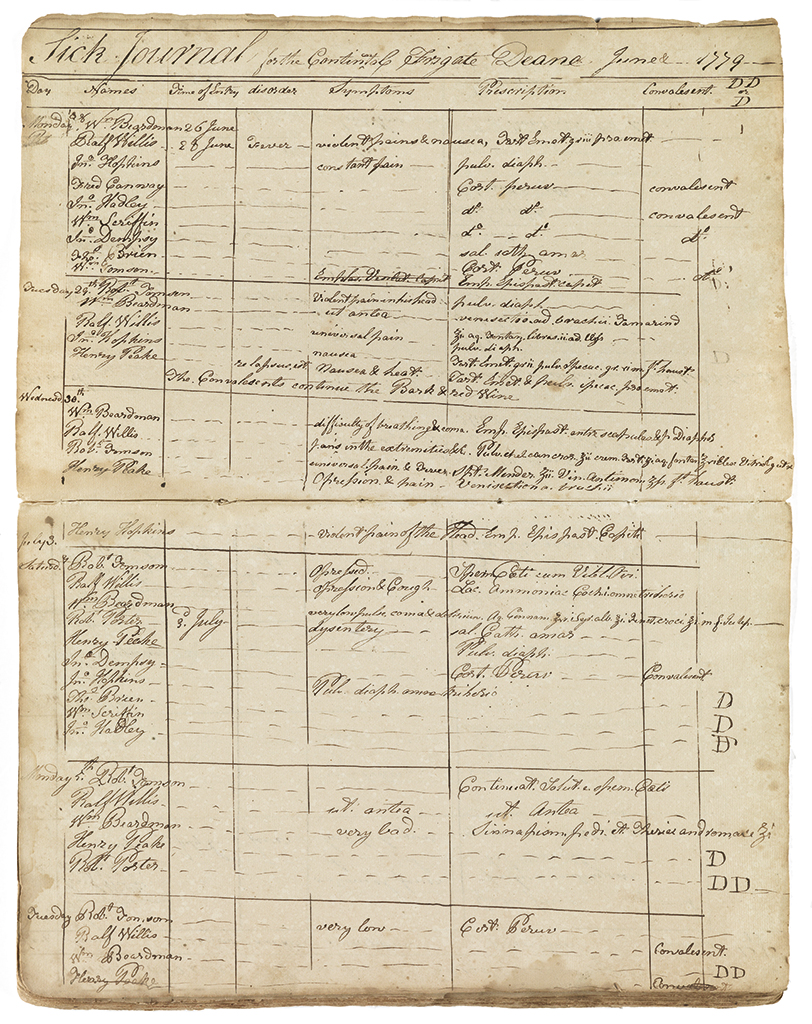 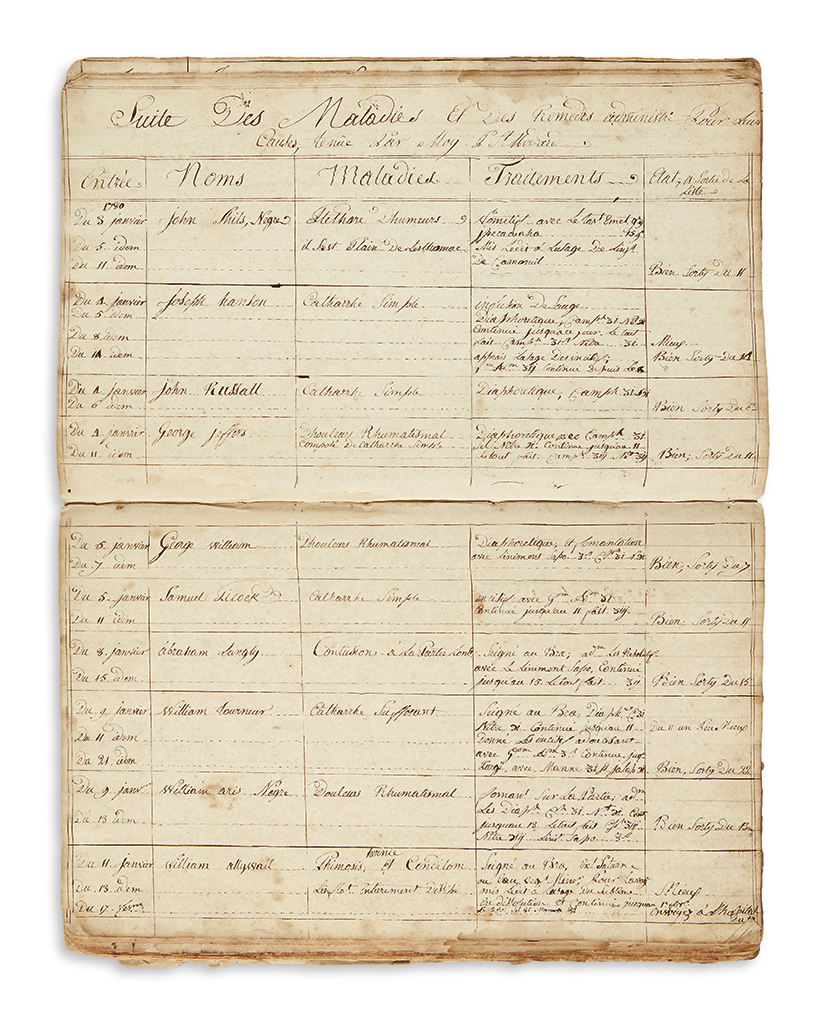