The long saga of Vermont independence seemed to be coming to an end when the Congress of the Confederation took up the issue in 1782. Arthur Middleton (1742-1787) was one of the South Carolina delegates. He had signed the Declaration of Independence in a previous stint. Middleton is generally regarded as one of the scarcest autographs among the signers of the Declaration of Independence; two of these documents are written entirely in his hand, although they are not signed. This lot consists of three sheets of notes from the 1782 sessions of Congress, relating mostly to the Vermont statehood issue. Vermont had fought for independence early and heartily, but the land dispute between New York and New Hampshire had left them out of the protection of the young Union.
1) Memorandum of Congress sessions, consisting of 17 entries in Middleton's hand from 22 March through 4 May 1782, 2 pages long, plus an integral blank leaf. Most of the entries are one or two lines long, with two much longer entries. The first entry notes the promotion of Henry Knox to major general. On 30 April is a resolution intended to exhort the states to make a final push against the remaining British garrisons: "United & determined exertions as with the cooperation of our generous ally will expel the enemy from their remaining posts within the U.S. & display to the world falsehood of the assertions of the Brit'h Court that the people of these states are neither united nor determined in support of their national independence."
Vermont is first mentioned on 1 April, when "Ltr fr Fay & co for admiss'n of Vermont cons'd." On 16 April, he records a lengthy resolution of the committee on Vermont which was read into the Congressional minutes: "The people of the sd district . . . have fully complied with the stipulation made & required of their Sov[ereignt]y & Indep'ce & admission into the federal union of the states, & that the conditional promise & ingagement of Congress of such recognition & admission is thereby become absolute & necessary to be performed." They put forth a resolution that "Vermont be acknowledged free, sovereign & indep't & that a Com'e be app'd . . . of the admission of the said state into the federal union." The motion did not pass, however, nor did other motions to schedule consideration for another date. Here Middleton adds an editorial aside: "So it is to be taken up when Congress is ripe for it." This item is used to illustrate Middleton's handwriting in Charles Hamilton's American Autographs, page I:108.
2) Middleton's transcript (partly in shorthand) of a letter from Jonas Fay, Moses Robinson, and Isaac Tichenor, dated at Philadelphia, 19 April 1782. It is one page long, plus an integral blank. These three had travelled from Vermont as envoys to Congress, "in full confid'ce that fr Integr'y & wisd'm th honble body, no obstacle cd prevent our confed'n & union w them" but "we are disap'd w unexpec'd delay of Cg in executing on their part" (the original was published in Vermont State Papers, page 172). Middleton had learned shorthand while studying law at Middle Temple in London, and was known to use it for note-taking at Congress.
3) A draft resolution regarding this 19 April letter, in a different hand than the other two documents. It is one page, on a single leaf, and though undated and unsigned, was apparently drafted on 22 April 1782. It essentially notes that just because Fay's letter was read into the Congressional minutes, the approval of Congress should not be assumed. It then notes Vermont's history of "positively refusing a Compliance with the recommendations of Congress." This resolution was not entered into the minutes of Congress and appears to be otherwise unknown. Provenance: Charles Hamilton sale, 19 December 1974, lot 269, to the consignor. 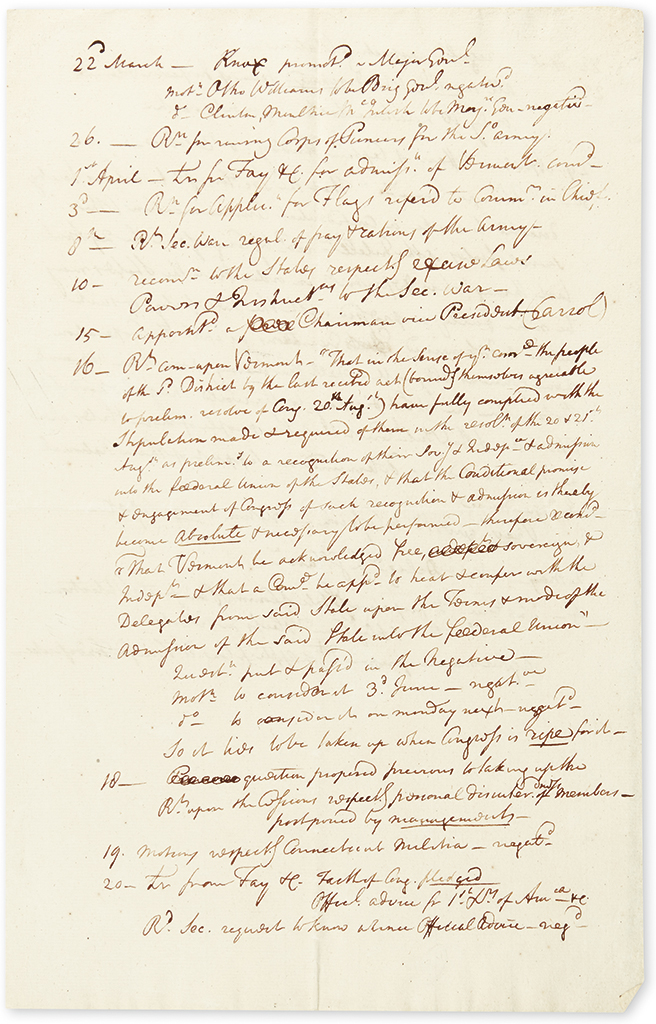