The sculptor John Severinus Conway (1852-1925) was an Ohio native, spent the early part of his career in Milwaukee, WI, lived for many years in Italy, and then spent his final years in New Jersey. He was an original member of New York's prestigious National Arts Club. He is best known for a bronze Civil War memorial titled "The Victorious Charge," which was cast in Rome and then unveiled in Milwaukee in 1898. As with many artists, Conway struggled to secure patronage for his master work. At first he had the support of United States Congressman Alexander Mitchell. After Mitchell's death in 1887, Conway went to court to continue the funding. Then Lydia Ely (1835-1914) of Milwaukee stepped in to save the project, gathering subscriptions from donors.
Ely also assembled a massive autograph book as a fundraising effort, and then sold it to Milwaukee brewer August Pabst for $8,000, which allowed the sculpture to be completed. This book was described as "the largest, most expensive collection of famous autographs of modern times." This autograph book is not included in the present lot, but Ely's files relating to its creation are present: hundreds of letters she received from participants, a thick stack of extra autograph slips, and a copy of the book's introductory text and index, handsomely bound with a 247-page typed carbon transcript of their contents. Among the autographs included in this lot are signed letters from Booker T. Washington and General Fitz-John Porter, an envelope inscribed with a note by S.L. Clemens (Mark Twain), and a slip signed by artist Frederic Remington.
Another major project for Conway was his "Oklahoma" sculpture for the 1904 St. Louis World's Fair. On 24 April 1904, he wrote to benefactor William G. McLaughlin that "my life since I took to art to save my soul and my reason has been an almost uninterrupted scene of famine and almost every other privation such as does not fall to the lot even of those who follow the humblest and physically hardest occupations."
More than half the collection consists of correspondence, much of it relating to "The Victorious Charge" and "Oklahoma." Among the Conway's correspondents represented here are artists Enrico / Henry Coleman, Charles Rollinson Lamb, Gari Melchers, and William Preston Phelps. Also included are numerous photographs--of Conway, "The Victorious Charge," and his other work. A group of four posed portraits of Colonel Joseph McClellan Bell in uniform from various angles suggest that he may have been a model for "The Victorious Charge." The collection also features a printed portrait of Abraham Lincoln, inscribed by Conway with a lengthy account of seeing Lincoln in 1857 or 1858, and much more. An inventory is available by request. Provenance: the artist's youngest son Robert John Conway (1899-1972); his widow Grace Robinson Conway (1894-1985), who organized and annotated the collection.
with--the artist's original shipping trunk, 13 x 19 x 34 inches, stenciled "J.S.C." The trunk alone weighs nearly 30 pounds; we will not be offended if you choose not to take delivery of it. 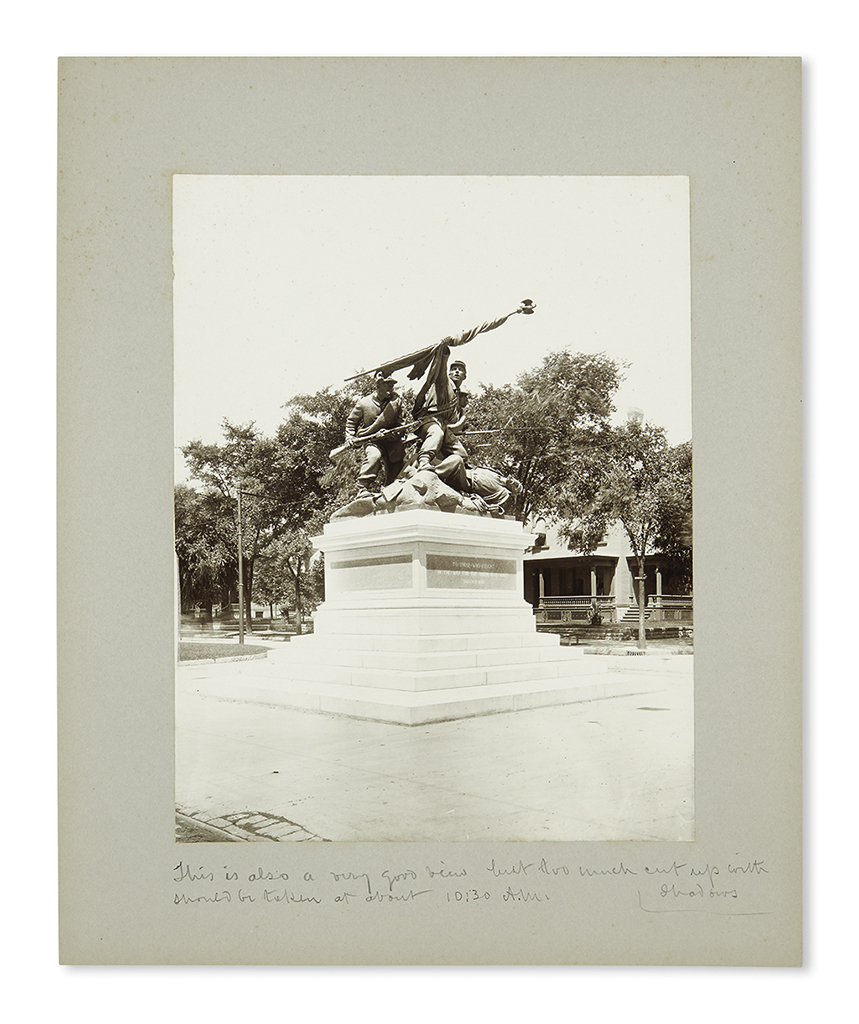