One of the highlights of Jacob Lawrence's artistic output was his series of 22 paintings on abolitionist John Brown, completed in 1942. In 1974, the Detroit Institute of Arts issued them as a portfolio of silk-screen prints. This correspondence file was retained by the printers, Ives-Sillman Inc. of New Haven, CT, and documents their collaboration with Lawrence on this portfolio and other projects.

Included are 4 typed letters signed by Lawrence, one unsigned carbon copy, and another letter entirely in his hand. His first, dated 18 August 1975, announces that he has sent the silk screen design for his "Harlem Street Scene" for the Harlem School of the Arts, and on 23 September he requests the painting's return. His 1 January 1976 letter discusses the printing of the John Brown series: "I appreciate the need for my full cooperation during its execution. I do look forward to making a contribution at any stage that it is felt I might be needed." On 19 September 1976 he writes to the Detroit Institute of the Arts that he has now received the first half of the portfolio in its entirety and that "the Ives-Sillman Studio is doing an excellent job . . . with great sensitivity" (sending this carbon copy of the compliment to the firm). On 24 November he announces his travel plans to fly in on 20 December for the final step: "Could you please let me know if the graphics will be available for signing at the time of our arrival." Lawrence's final letter is more personal, written shortly after the death of the firm's partner Norman Ives on 2 February 1978. He writes to the surviving partner Sewell Sillman: "It was both a pleasure and a rewarding experience to have known him, to have seen and heard him talk about his work. And of course to have had such a professional as Norman show the interest and sensitivity that he did in my work was, for me, an honor. . . . I wish to thank the Ives-Sillman Studio for its sensitive and creative work in silk-screening the John Brown series."

Also included are 7 other items relating to the firm's work with Lawrence. A preliminary letter from the Detroit Institute of Arts is dated 24 Jne 1974: "We are still deeply interested in this project but, as you must realize, the financing of it needs considerable discussion." 4 of Sillman's retailed carbon copy letters to Lawrence document his work. On the Harlem School of the Arts project, he notes on 14 November 1975: "The edition is 150. With the original, I am enclosing 160 prints. The extras are for errors made in signing, keep the rest for yourself." On 15 December 1975 he announces the approval for "a Portfolio in a limited edition of your series of 22 gouache on John Brown. . . . Since the original work can not be removed from the museum . . . I started the project while I was at the University of Michigan by examining five of the works. I made an outline drawing of each work and, using a printers edition of the Pantone Matching System, I selected colors. . . . I will develop a screenprint as close as I can to the original." On 17 February 1976 he announces that a color transparency for #7 has been sent "because it will be about as difficult as any in the publication. . . . I will want to ask you about details like the brush marks in the table and in the walls." On 27 March 1976, he tries to clear up some confusion on print numbering: "Transworld has, in addition to the 125 numbered and signed prints, 40 which are signed but not numbered. Hopefully, you have 10 more which you should title and sign but not number." Finally, the lot includes a shipping notice of a complete mock-up sent to the Detroit Institute of Arts on 9 December 1976, and an unsigned contract for the project between the firm and the Institute. As a whole, this file is an important historical source on one of Jacob Lawrence's most enduring projects. 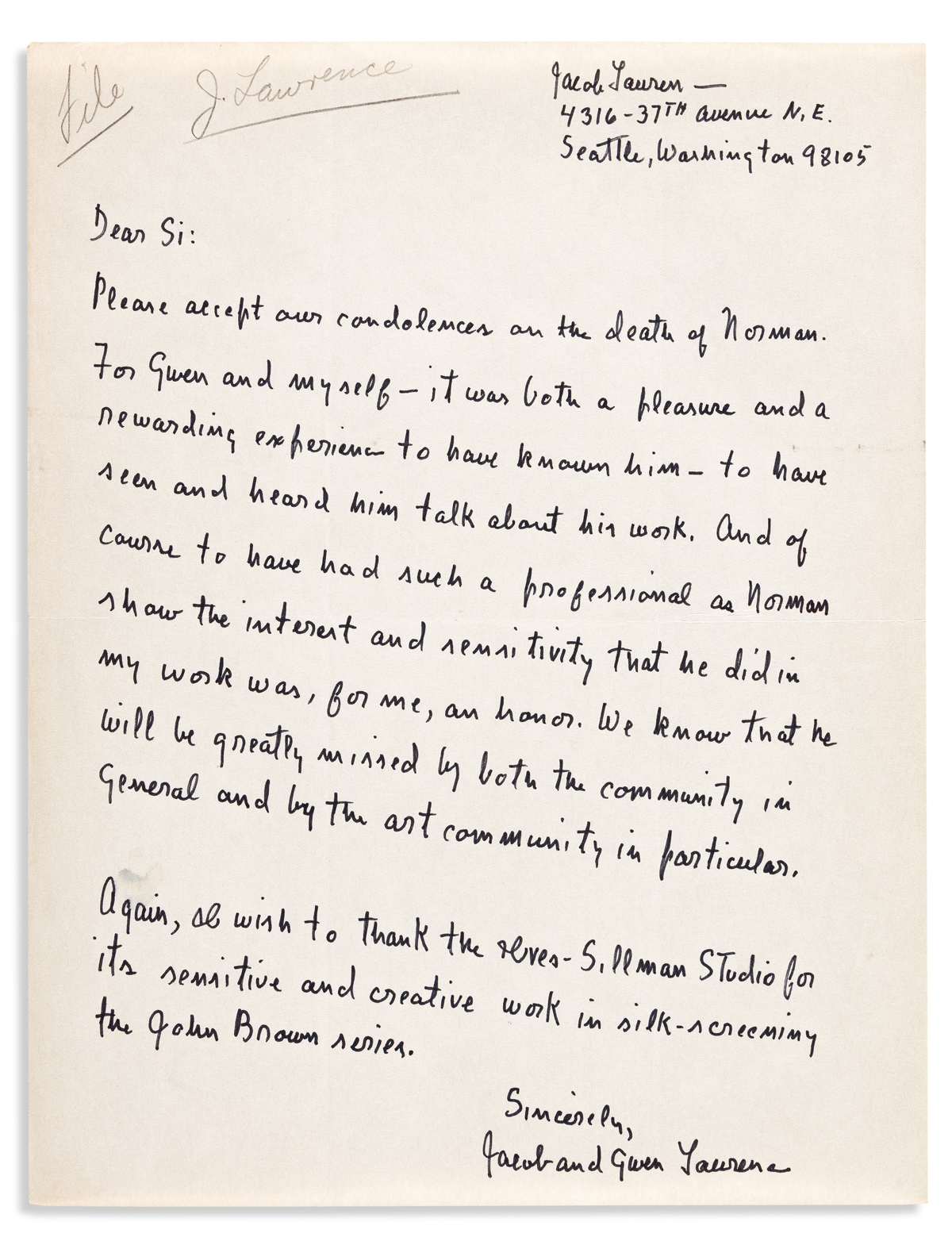