Clara H. Grabau Adams (1884-1971) was an Ohio native who married a wealthy Brooklyn leather-goods magnate. She took her first airplane ride in March 1914, and was hooked. Though she never trained as a pilot, she became perhaps the most famous air passenger of her day--the first woman to fly across the Atlantic as a ticketed passenger, and a passenger on the first flight of the Hindenburg. She set a record in 1939 for the fastest circumnavigation of the globe by commercial flight.
The two diaries run from 17 July 1914 to 11 September 1915. They are liberally illustrated with photographs, clippings, ephemera, and her original drawings on many pages. No diary entries were spotted which discuss aviation, but the scrapbook content on her aviation interest is substantial. After the 16 July 1915 entry is a photo of Adams on a plane at the Panama-California Exposition, captioned "San Diego Expo, Cal., 1915," probably from a trip to California she took in March 1915 (see illustration). Also included are 9 loose leaves from other diaries kept by Adams dated 1914 to 1921. On one of these leaves is a photograph of an airplane, captioned in manuscript "Lake Eustace, Florida, pilot Walter E. Johnson, Clara Adams' first flight, $10.00 the fare, Thomas flying boat, Wed. Mar 14, 1914." Another sheet has 5 photographs of Adams posing with pilots in 1917 and 1920, including Walter E. Johnson, and the pioneering sisters Katherine and Marjorie Stinson. Also included is an illustrated clipping from 10 November 1919, showing Adams in a hydroplane "as a surprise greeting to her returning husband."
The diaries also document numerous long vacations, including Lake George, Lake Placid, and Lake Oquaga, NY, and a two-week "staycation" in a Manhattan hotel. Laid down near the rear of the first volume is her membership card in the National Abstainers' Union, signed by William Jennings Bryan. 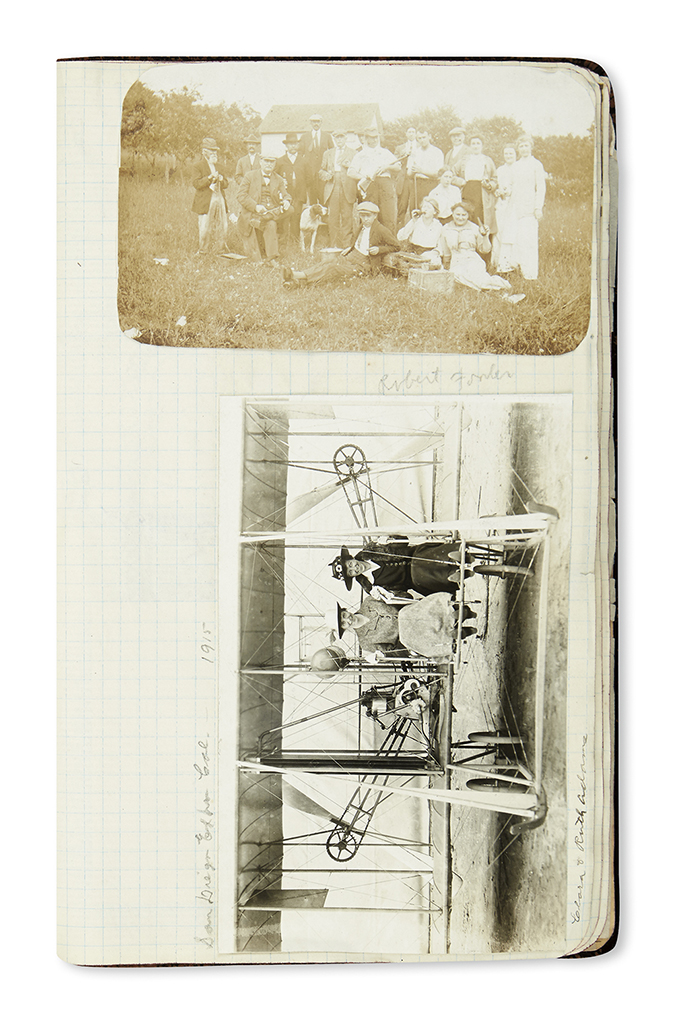