Hugo Eckener (1868-1954) led the Zeppelin operations from 1917 until he was sidelined by Hitler in the late 1930s, including Luftschiffbau Zeppelin and the American Zeppelin Transport Inc.; he also commanded the Graf Zeppelin airship on many voyages. This lot, from the papers of Eckener and his American-based assistant, captures the rapid decline of transoceanic airship travel in the wake of the 1937 Hindenburg disaster and deteriorating diplomatic relations.

Perhaps the highlight of this lot is a retained carbon of Eckener's letter to President Franklin D. Roosevelt, dated Washington, 25 May 1937, accompanied by a 23 May hand-corrected draft. Writing just three weeks after the Hindenburg disaster, Eckener pleads for a supply of subsidized American helium to replace the highly flammable hydrogen fuel which had destroyed the Hindenburg. The successful airship industry had "with one stroke been checked by the disaster that befell the Hindenburg. . . . We must not assume the responsibility of continuing with our lighter-than-air merchant ships without the use of helium. It depends upon your Government, Mr. President, if it is prepared to enable us to use safe Helium, and . . . would represent a tremendous step forward in world traffic for the benefit of mankind." Eckener's quest for American helium was well reported in the press in May 1937, but this important letter appears to be unpublished.

Also included are 4 other personal Eckener items: 2 fan letters written to him in 1937 and 1938; an invitation issued to Eckener by the Germania club at Dartmouth College in 1938; and an apparently unpublished piece of photostat sheet music, "Wings of Victory," dedicated to "Dr. Hugo Eckener, Air Ambassador," by Mona Reed of Cleveland, OH.

Also included are 9 letters and postcards addressed to Friedrich Wilhelm "Willy" Von Meister (1903-1978), a German immigrant to New York who acted as Eckener's personal representative, dated 1935-1938. One is signed by Eckener and others; one is a copy of a letter from the White House, thanking Eckener for the 1937 Zeppelin calendars. A Mr. Theilig thanks Von Meister for a complimentary trip aboard the Hindenburg from New York to Great Britain in July 1936, describing its pleasures at length: "While over the Hudson the ship rolled a few times very slightly. It was so little that I paid no attention to it. Afterwards I was told that that was the worst rolling the ship had ever done. . . . I felt that the first night on an airship was not made to go to bed early, so we enjoyed the company of a couple bottles guten Weines. . . . The whole matter feels so natural . . . the airship is really ready for the commercial field." Famed American airship captain Thomas "Tex" Settle wrote a 4-page letter in December 1935, expressing his hopes to retire from the Navy by 1940 "unless the Navy should experience a tremendous expansion" and jokingly asking "Will you give old Tex a job as office boy?" Settle has enclosed a photograph of the captains of his destroyer group in Haiphong. One envelope is addressed to von Meister on a Zeppelin Von Hindenburg illustrated cover. In addition, 5 other letters and postcards appear to be addressed to Von Meister as representative of the company. In October 1938, Charles E. Rosendahl (the captain of the fatal Hindenburg flight who survived the wreck) wrote from Pearl Harbor, Hawaii, hoping to write an article on the superiority of airships for trans-Pacific flight; this carbon copy was forwarded to "Willy" for response.

One folder contains 19 American newspaper and magazine clippings on Zeppelin, many of them gathered by a clippings service in 1938. Finally, an envelope of 7 pieces of ephemera includes a 1938 Lufthansa brochure; a maquette for a brochure for the Graf Zeppelin LZ130 airship in parallel English and German; a brochure and newspaper for Cleveland's 1936 centennial celebration; a photograph of a caricature of an NBC reporter aboard an airship; and an invoice for copper and rubber washers shipped by the Zeppelin company in 1938. A ticket for a "Zeppelin Hindenberg Eckener Feier" was to be held by a New York German-American group on 10 May 1936. Taking place four days after the disaster, we feel safe in assuming the event was canceled. 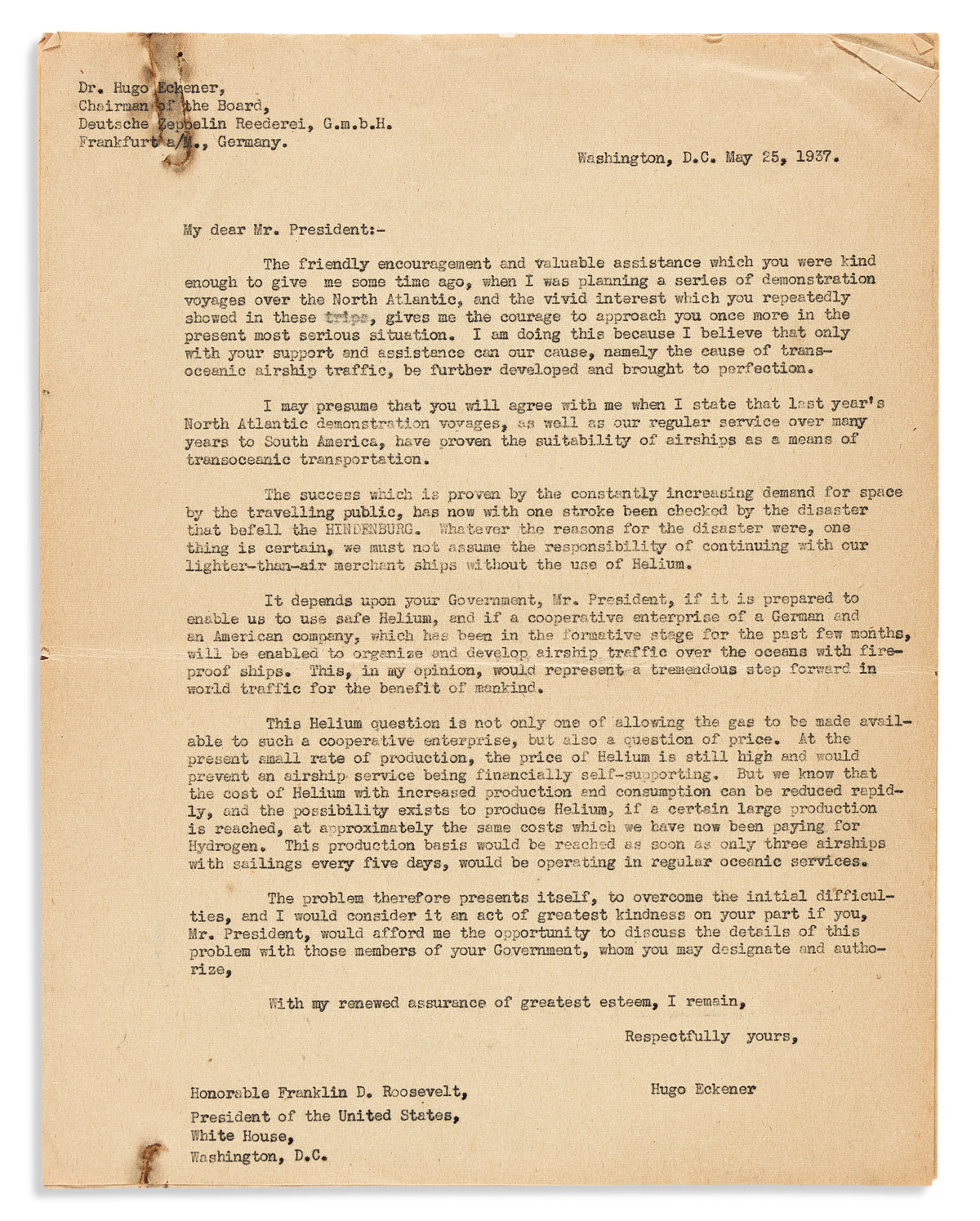