Price Realized: $ 8,000
Price Realized: $ 10,000
?Final Price Realized includes Buyer’s Premium added to Hammer Price
Estimate: $ 1,500 - $ 2,500
"I AM WEDDED TO A CALIFORNIA LIFE" (CALIFORNIA.) Cook, Samuel H. Letters from an adventurous 49'er who never found much gold but fell in love with California. 12 Autograph Letters Signed to his siblings and mother in New York; condition generally strong, each with either original mailing envelope or integral address panel with a variety of postal markings. Vp, 1849-53
Set Alert for Similar Items

Samuel Huntting Cook (circa 1828-1888) of Sag Harbor, NY went west as a member of the New York Union Mining Company in February 1849. His first letter was written en route from Panama that April. He wrote from Sacramento on 24 October 1849, describing the company's abortive first month in action: 'We concluded to go to the mines at Sutter's Mills . . . and then fell to work in a dry ravine near the River Americano.' Meanwhile, a portion of the company had been trying to locate a spot for a steam mill in Sacramento or San Francisco, but after just a few weeks found their cash reserves were woefully inadequate: 'The comm'e after mature deliberation concluded it would be wasting time and money to attempt to do anything as a Co., and accordingly took measures to dissolve the Co. . . . I went to work papering and carpeting a gambling house @ ten dollars a day. . . . I am now second clerk in the Sacramento Hotel @ $150 per month. Shall stop here a month and then leave for the mines.'
On 20 December, he wrote 'I would not advise any of my friends to come out here. There are hundreds of young men, healthy when they left home, who will find a grave in California. There are hundreds here now who would work for their board if they could get under a decent shelter. There are men of all nations, Chinese, Malays, & islanders, Yankeys &c, a hetrogenius mass of nations. There are street fights every week.' He ends the letter with a postscript after an unusual guest entered his hotel: "One of the Hounds has just come and is telling of scrapes he had at San Francisco with the rest of them last spring, of the murders of the Chilenos &c, the breaking up of the Jews' shops &c.' The Hounds were a vicious nativist street gang which flourished in lawless San Francisco in early 1849 before 20 of them were arrested in July. They were infamous for assaulting and robbing South American mine workers, though their anti-Semitic efforts do not seem to be well known.
By the following summer Cook was taking another shot at mining, writing from Marysville on 28 August 1850: 'Making a prospecting tour from the valley of the Feather River where the mercury stands in the shade as high as one hundred & thirteen, through the Sierra Nevada snows, passing over creeks or mountain torrants on crusted snow, the water in some ravines twelve & fifteen feet below the snowy bridge, over high mountains sleeping in two pair of blankets and cold with a California saddle for my pillow, and old dog Mingo at my feet like a warm brick, who had to leave me once in a while to drive the wolves from our luggage. . . . One night we was awoke by some screaming. Old Mingo was gone from my feet. About twenty feet from our camp Old M had an Indian boy down on the ground, hold on his breast, shaking him severely. We let the boy go & went to look at our mules & found two gone, but caught them again.'
The next three years were spent between failed mining and other odd jobs; he worked briefly at a Sacramento auction house and tried his hand at farming. He often promised to come home to New York soon, but passages like this suggested otherwise: 'I shall make California my home until I make something' (27 September 1850) or 'The prairie is covered with flowers of at least twenty varieties, and as you cast your eye around, you see here and there a band of antelope or wild cattle' (3 April 1851). In his final letter in the lot, dated Indian Valley, 6 March 1853, he notes that 'I am (I may say) wedded to a California life, and almost dread the New York City life.' Cook remained in California through at least 1888, when he appeared on the voter rolls for Sierra Valley. A more detailed summary of his letters is available upon request.
With--an unrelated letter from Captain L.B. Edwards, recommending another captain as a steamship commander. San Francisco, 14 October 1853. 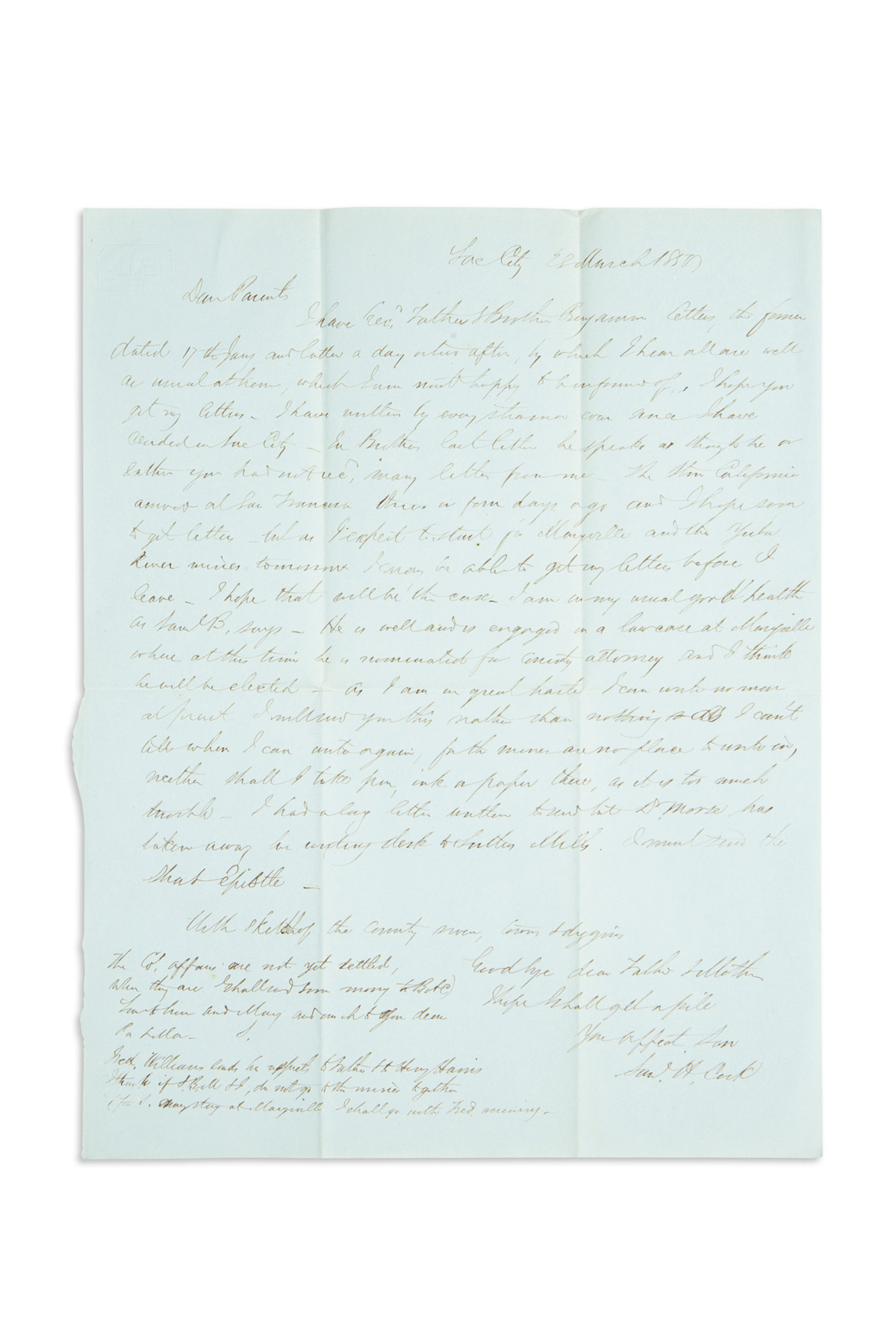