The letter begins at sea, 'within a week or two's sail of California.' It describes trouble between rowdy miners and locals in Saint Catherine's (Santa Catarina, Brazil): 'While we lay there, there were several Californians came in, amongst others the Geo Washington and the Strafford, and they had some as choice specimens of the b'hoys of New York as I ever saw. . . . The b'hoys were out in all their glory, some in Californian rig, some in fire, some in military, and some, but how few, as gentlemen, and almost every one with the handles of their bowie knives obtruding from pocket. . . . Some of the b'hoys went into one of the numerous houses of ill fame in Water Street, walked in, and without any provocation commenced smashing the furniture to pieces, turning the house upside down. . . . The policemen soon gathered round, and the first one that attempted to enter the house was felled like an ox, the next one fared no better, the 3d was killed on the spot, one of the rowdies burying his bowie to the hilt in his stomach.' When theAmerican thugs were finally subdued and brought under arrest, a mob attacked them: 'One of them was killed, and a good many badly hurt by the clubs & stones of the populace. And one poor fellow, who had not been engaged in the row at all, but was doing his best to get the pistols and bowies away from his shipmates, was knocked down and had both arms broken. . . . The American consul looking on, he begged of him to take him into his office or somewhere where he could get a doctor and the cowardly son of a gun refused. If they had finished by shooting him, twould have been a small loss.' The ship remained at Santa Catarina for two weeks, then stopped briefly at Staten Land in Tierra del Fuego and Juan Fernandez Island of Chile. 'I don't know what California will be for a place to live in, and where conversation is carried on by means of pistols and bowie knives. . . . I have no regular plan of action, only the determination to get money by every honest hook and crook that lays in my power, and in 3 years at the top that I am in hopes of being able to have enough to return for good to old Long Island's sea girt shore.'
The last page of the letter was written on 20 August, 11 days after arriving in San Francisco. Mills was living in a tent in 'Happy Valley,' suffering from dysentery, and planning to leave for the mines in two days. He describes boom-town San Francisco at length: 'The town, almost the work of a day. Houses built of mud, boards & cloth, some with the surrounding hills for sides, trees for partitions, mother earth for floor, and the heavens above all for roof. Streets like a rail fence, very uneven and remarkably dusty. . . . Principal amusements, gambling & drinking . . . society, none whatever; law, of the kind called lynch. . . . women scarce, and high in the market ($100 per night). . . . Productions: gold dust, sand, long hair, and growth of whiskers, mules, wild asses, wilder oxen & wildest Indians. . . . Churches, none; gambling halls 20; punishment for any heinous offense, the hemp court; pistols useless, guns & rifles good for crow bars, bowie knives do to pick your teeth with. . . . If gold lasts, this will be one great country, and in time will outshine Sodom & Gomorah.'
We've been unable to trace John K. Mills in census or newspaper accounts, but he may have grown up in Sag Harbor, NY with his correspondent Benjamin A. Cook (1823-1891). Mills might well have been among the many young men who died in California that year or the next. All we can say for sure is that he wrote a great letter. 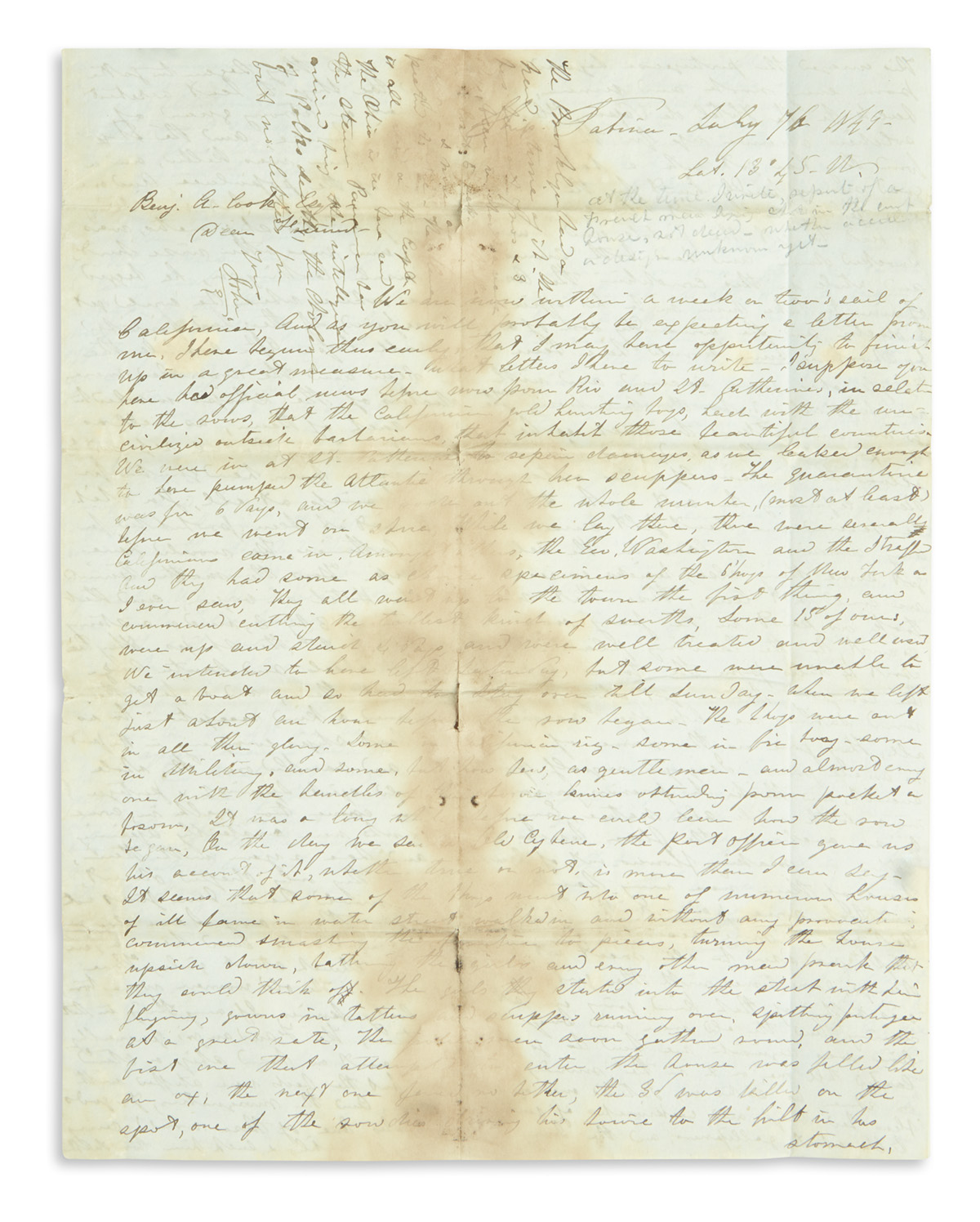