Edward W. Syle (1817-1890) was an American missionary. He and his family arrived in China with the Protestant Episcopal Church Mission in 1845. He spent most of his time in Shanghai. By the time this diary began, he was a six-year China veteran, but still recorded cultural differences with amazement: "Another man also came in, with a request that I would do something to help him recover his brother's gambling losses! He proposed that I should get a false paper from some foreign consul!" (20 April 1851). Once, a boatman stole something and was chased by an angry mob, and Syle "was obliged to encounter & pacify by giving them 1000 cash" (4 May 1851). Demons seemed to be a regular concern. Noting his nightly reading, he "Finished Woodward on demonic possession" (22 April 1851), and later noted that "Chung Chu gave us some account of his Fok Kien mother's conduct on recovering from sickness, sd 'She is like devil', meaning that she was much addicted to the worship of demons" (25 May 1851).
With the Taiping Rebellion gaining momentum in early 1853, Syle boarded a ship for America on 16 February, leaving behind fellow missionary John Tavis Points in charge of the mission. The ship reached St. Helena on 19 April (which he describes at length), and reached New York on 19 May. He did a speaking tour of the East which lasted through much of 1854. The logical next step was to work with the rapidly expanding Chinese community in San Francisco, where he arrived on New Year's Day, 1855. 122 pages of the diary are devoted to his 14 months there.
Contemporary accounts of the early Chinese in California are scarce. An account by someone possessing this level of familiarity with Chinese language and culture is rarer still. In San Francisco, Syle seemed distressed to find the Chinese so ragged and impoverished, and disappointed by the widespread discrimination they faced. On his first day in San Francisco, "as I went up the street in the morning, observed several times where Chinese lewd women were exhibiting themselves. During the day, saw many ill-looking Chinamen in the streets; met with only one at all neatly dressed or clean. As I passed along, I saw four or five Chinese gambling houses of the worst description like those near the Yang Ring Pang at Shanghai. . . . I saw two of them smoking opium" (1 January 1855). "Tuesday I spent among the Chinese, especially in Sacramento Street, where I found such tenements both above & below the level of the street as were wonderful to behold. Squalor & opium-smoking were painfully prevalent" (23 May 1855). Syle thought charitable works might prove his best form of outreach: "With old Ly-Sam, visited the Young-wo Wei Konan & found there large numbers of men recently arrived, among whom we distributed some tracts & gospels. I had . . . in my mind to inquire about their sick and see what they thought of a hospital . . . because I am confident we can reach them here in that way better than any other" (6 March 1855).
His concern for these immigrants extended beyond simply gaining converts: "The Chinese doctor, Ng Chang Juo, who lives on Judge McHenry's land, called. Quite the pleasantest Cantonese I have ever met with. . . . His account of the way in which his countrymen are treated here corresponds with what others have told me, summary and unscrupulous" (12 January 1855). A local lawyer told Syle that "he often has law cases in which the Chinese are concerned, & that they 'do not often get justice in our courts'"(3 January 1855). Syle noted that the morning papers were "full of scraps about the Chinese, generally expressing great aversion, & a wish to get rid of them altogether. Not one takes their part" (6 February 1855).
Syle also spent time outside of San Francisco. He moved his family to Oakland on 1 February 1855, but kept a small office on Sacramento Street in San Francisco where he did most of his work. 23 February saw him begin a short exchange in Marysville. On 31 October Syle made a visit to the mountain gold rush town of Auburn, where he found that "the Chinese have established themselves in considerable numbers, seven or eight hundred I should think. . . . Two gambling houses seemed to be in operation night & day. Several brothels were open to the view of passers by and a Chinese theatre was filled with stolid listeners. A Spanish dance house (kept by an American, a youth of about 22) displayed scenes of which I had previously no knowledge but from description. A negro drinking house resounded with profanity within & without. Indeed profanity surrounds me like an atmosphere. . . . The ear is filled with senseless stupid maledictions" (31 October 1855).
Syle left California in February 1856, and the closing months of this diary were written back in Shanghai. Taken as a whole, this diary offers an extended look at 19th-century Chinese culture from a sympathetic American perspective. 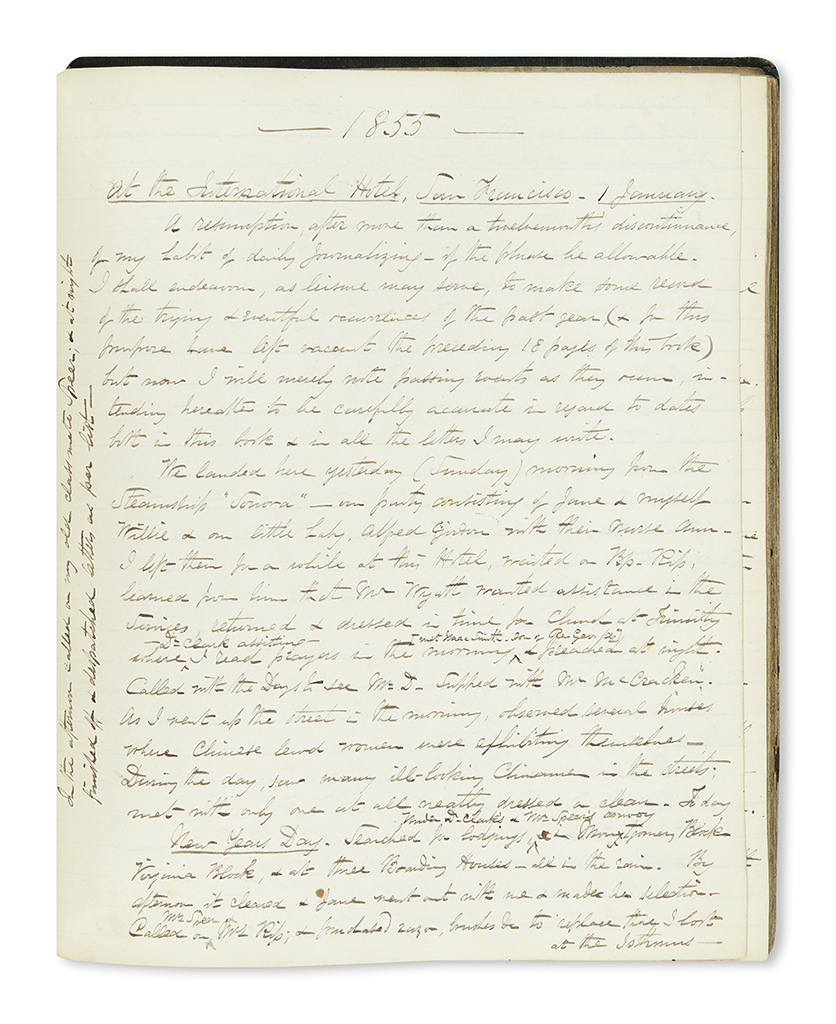