a rare, and possibly unique copy of the official court transcript of the first Scottsboro Boys trial. This initial hearing began what would become one of the most complex and protracted cases in American judicial history.
In the early days of the Great Depression, "riding the rails" was a common practice for both poor whites and poor blacks. In March of 1931, nine young black men (most did not even know each other) were "hoboing" a freight car with two white women, and a group of young white men. A fight broke out, and the white men were forced off the train at Stevenson, Alabama. When the train pulled into the next stop at Paint Rock, a posse of over 50 men was waiting for them. The boys were tied together, piled into the back of a flatbed truck and taken to jail in Scottsboro. In the confusion and fully 20 minutes after the train had left, one of the women came forth and said that the boys had raped them. In 1931 Alabama, rape meant a death sentence, and most certainly for a black man. The boys were assigned court-appointed lawyers--none of them either competent, or interested in defending their clients in a capital case. One of the former, a real-estate attorney, advised them to plead guilty. From April seventh through the ninth, Clarence Norris, Charlie Weems, Haywood Patterson, Olen Montgomery, Ozie Powell, Willie Roberson, Eugene Williams and Andy Wright were all convicted, and sentenced to death. The trial of Roy Wright ended in a mistrial when one of the jurors asked for the death sentence--even though the prosecution asked for life in prison. The 124 pages of transcript offered here demonstrate the absurd "kangaroo court" quality to the proceedings. Not one single "objection" mounted by the tepid defense attorneys was allowed by the court.
By the end of April, 1931 the NAACP and the International Labor Defense stepped in to defend the boys but then argued over the strategy. [The NAACP would later drop out.] In January of 1932, Ruby Bates, one of the alleged rape victims came forth and denied having been raped, but she was ignored. As the years passed, sentences were overturned, individual cases tried and appealed, and venues changed. By 1937, most of the Scottsboro Boys had their charges dropped, however, others' cases continued, including that of Haywood Patterson, which was the longest and most complex. The Case of the Scottsboro Boys became a rallying point for the civil right movement of the 20th century. This transcript was rescued from a dumpster in Huntsville, Alabama thirty years ago. 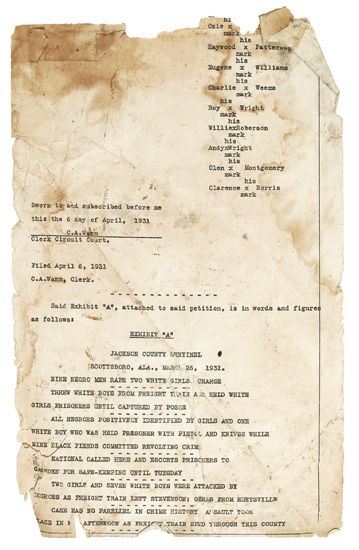