Ralph Johnson Bunche (1904-1971) was one of the most famous diplomats in the United States. With a Ph.D. in political science from Harvard, he had played an important role in the founding of the United Nations. He was the chief mediator in the negotiations which brought temporary peace in the Israeli-Palestine conflict, for which he won the 1949 Nobel Peace Prize.

With these credentials, he applied to join the West Side Tennis Club in Forest Hills, Queens, NY in 1959. He was rejected on the basis of his race--the club explicitly excluded Black applicants. The Queens borough president, an Irish-American named John T. Clancy, took a public stance on behalf of Bunche in this conflict.

Offered here are the letters Clancy received in response, which show the wide-ranging reactions to his principled stand. A Jewish woman is outraged at the club's "recent show of bigotry," while a Jewish man appreciates Clancy's efforts to "assure equal treatment for all in our community" (the club also barred Jewish members). The Rev. Emmer Booker of a local A.M.E. church praised Clancy's "forthright and courageous statement," and the parent's association of a local school also praised his stand. Two letter writers offered tepid support but mainly complained at length about Clancy's failure to protest similar discrimination against Catholic teachers at Queens College.

On the other end of the spectrum, three constituents were not pleased. One man, signing only as "a white taxpayer," accuses Clancy of having "sold his soul for a lousy nigger vote" and asks him to "save us from becoming an African jungle." It gets worse, if you care to read more. Another, signing as "an American of the Jewish faith," was more polite in their bigotry, explaining that "there are plenty of Negro clubs, where Negroes can feel much more at home, and awkward situations can be avoided." Finally, a Kew Gardens woman insists "I do not hate colored people," but repeats several scurrilous personal rumors about Bunche, says "he acts like a stooge stirring up trouble," and complains that Black fans did not come to cheer Black tennis great Althea Gibson when she competed in a tournament at the club in 1950.

Perhaps not surprisingly, the supportive letter writers sign their names, while two of the three racist responders sign anonymously. Queens has long been recognized as one of the most diverse places in the world, but also as the seat of deeply entrenched racism: home of the 1986 Howard Beach murder and of fictional television bigot Archie Bunker. In these letters to the borough president, both sides of Queens are on full display.

Also included is a letter Clancy sent to tennis sponsor Harcourt Davis in New Jersey, urging him to move the prestigious Davis Cup tournament away from the West Side club because of its "rank prejudice and discrimination . . . against our Negro and Jewish citizens." The letter was returned to sender, as Clancy apparently did not have the inside scoop on contacting wealthy tennis benefactors. 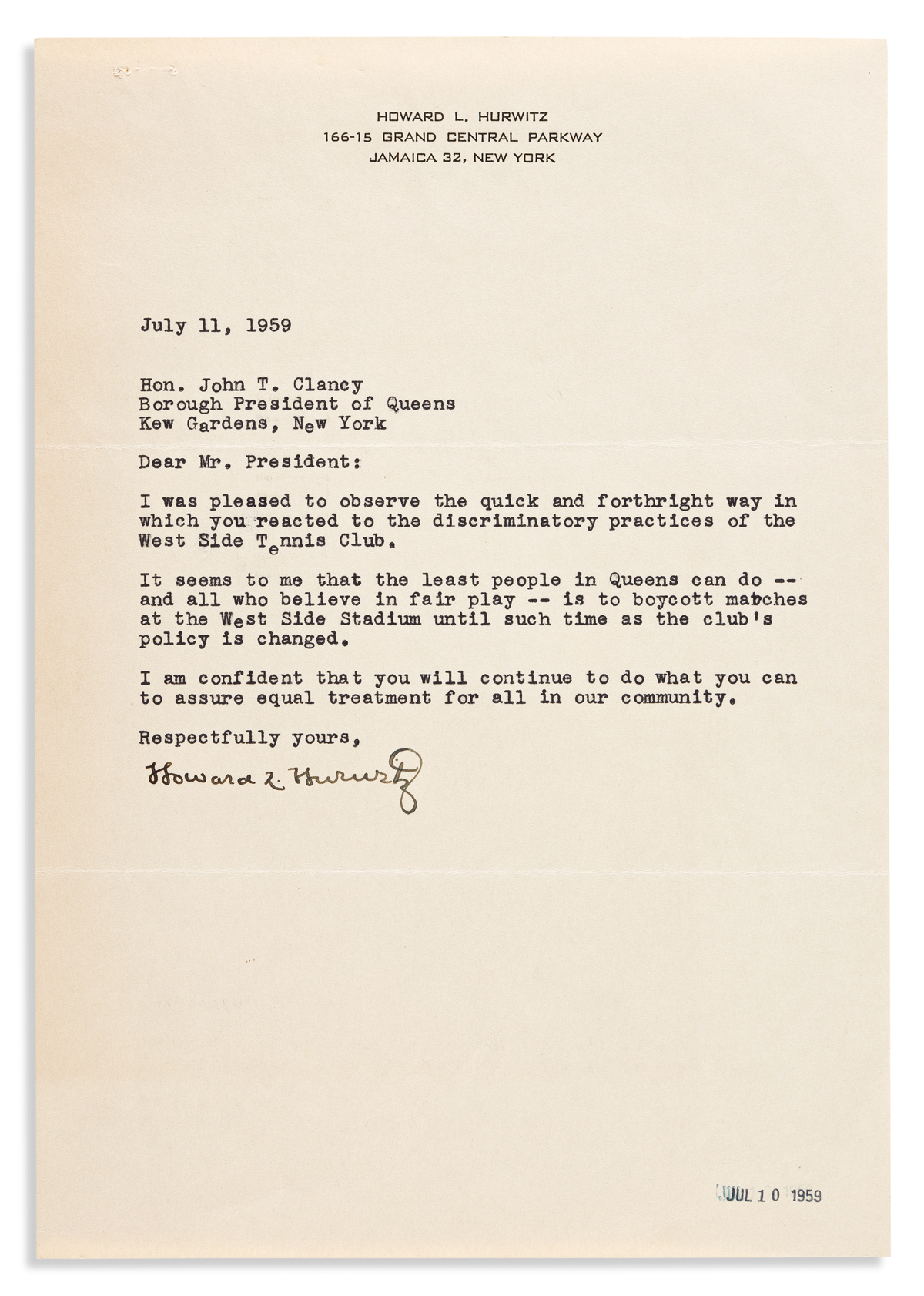