a copy of the original "notice of intention to contest," signed by fannie lou hamer, representing her challenge to Jamie Whitten, thirteen--term white Representative of a county where eligible black voters outnumbered whites by a significant majority. Fannie Lou Hamer (1917-1977) black orator, politician, activist, educator, and farmer, who once said she was "sick and tired of being sick and tired," was born in rural Montgomery County Mississippi, the twentieth child of tenant farmers. The family moved to Sunflower County when Fannie Lou was two years old, and she began working in the cotton fields at age six. In 1962, hurt and angry following a hysterectomy performed without her consent, Ms. Hamer decided to attend a meeting in her hometown of Ruleville where she heard James Forman of SNCC and James Bevel of SCLC. After listening to both speakers talk about voter registration, Ms Hamer and seventeen others decided to go to the Courthouse in Indianola and register. There they were told that they could only enter the courthouse two at a time, and were given a literacy test, which they all failed. On their return, they were stopped by the police and told they were driving a bus that was the wrong color. That night, B.D. Marlowe, the owner of the plantation on which she and her husband worked as tenant farmers, told her to withdraw her application to register, or move.
Thus began Fannie Lou Hamer's conversion to political activism. Her husband "Pap" stayed on because Marlowe confiscated their belongings. Pap became a virtual slave working off the rent for their meager plot until the Fall harvest was over. Fannie meanwhile remained active, staying with friends and relatives, and eventually serving as Field Secretary for SNCC.
Hamer gained national attention in 1964 when she appeared before the National Convention at Atlantic City on behalf of the Mississippi Freedom Democratic Party, in an attempt to unseat the state's all-white delegation. The MFDP lost the New Jersey Convention challenge to the Regulars, but Hamer and the Freedom Democrats continued their fight back in Mississippi. Hamer ran for Congress in 1964, losing only because the Regulars disallowed her name on the ballot (she received more votes than her opponent on the "Freedom Ballots" distributed by MFDP). A year later, the MFDP unsuccessfully appealed (the present document) to the U.S. Congress maintaining that Mississippi's all white representatives should not be seated because they were elected without the participation of Black voters. Provenance: The present copy of the "Notice of Intention to Contest," signed by Ms. Hamer was given to Lou Sharpe, National Secretary of the NAACP Youth Division. Sharpe's typed report to the NAACP is included here together with his extensive notes and other related material. 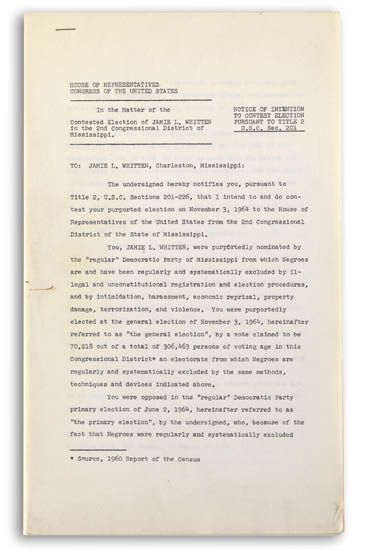