a small but very important archive regarding the "red summer" of 1919. The term "Red Summer" was coined by NAACP activist, writer and poet James Weldon Johnson (1871-1938). It described the bloody race riots that erupted in over three dozen American cities during the long, hot summer of 1919. In most instances, blacks were set upon and simply overwhelmed; people beaten and their neighborhoods burned. Many were murdered for imagined slights, or insults against white women or simply for being somewhere they shouldn't have been. People fought back, but armed retaliation was rare. However in the cases of Chicago, Knoxville and Elaine, Arkansas, blacks did fight back, and with dire consequences. This archive deals with the NAACP's actions to aid the victims of the riots and the defense of those who were arrested as a result. It contains official reports, letters, telegrams, and documents spanning 1919-1922, and includes: Typed Letters Signed from James Weldon Johnson, Monroe Work, John Shillady, U.S. Bratton, Scipio Jones, and others prominent in the NAACP or the black communities affected by the riots. There are typed reports of the trials of both whites and blacks arrested as a result of the riots and the outcome of their trials (all on the stationary of the Joint Committee to Secure Equal Justice for Colored Riot Defendants) with added pencil and ink notations. There is as well, a short printed report, "Provident Hospital in the Race riot of July, 1919," and a small broadside "The Cause and Cure of Race riots," (needs restoration.) Very important to the Chicago riot in particular is a copy of the original 40 page Chicago Coroner's Jury Report; also the original report on contributions for aid for victims of the Chicago riot, "Work of the Joint Committee," sent to the New York office of the NAACP, with notations and corrections from John Shillady and others. There are many pieces of correspondence sent to the NAACP some accompanied by retained copies of replies, including a telegram from Joel Elias Spingarn to Herbert Seligman at the New York office of the NAACP in regard to the riots. There are numerous typed and printed press releases from John R. Shillady and James Weldon Johnson regarding the Chicago riot with concurrent news clippings and notices of the riots in Chicago, Knoxville and other cities, attached to the reverse.
Included is a substantial amount of material dealing with the Elaine, Arkansas riot of the same year, with the Supreme Court Petition of Habeas Corpus regarding the Negro men accused of murder in the Elaine case (needs some restoration), and the Report of The Citizens Defense Fund Commission from H. McConico, sent to John Shillady. Provenance: the Jackson-Mitchell family. 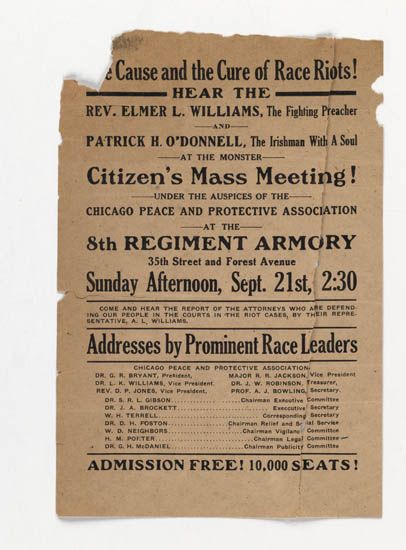