Price Realized: $ 21,000
Price Realized: $ 25,200
?Final Price Realized includes Buyer’s Premium added to Hammer Price
Estimate: $ 4,000 - $ 6,000
RARE AND IMPORTANT (CIVIL RIGHTS--LYNCHING.) WELLS, IDA B[ARNETT]. A Red Record. Tabulated Statistics and Alleged Causes of Lynchings in the United States. Respectfully submitted to the Nineteenth Century Civilization in the "Land of the Free and Home of the Brave." Portrait frontispiece, two illustrations of lynchings, one from a photograph, the other an engraving. 111 pages, some archival repair and conservation. 8vo, original self-wrappers, bound into a modern cloth chemise, enclosed in a specially made 1/4 morocco and marbled paper covered clamshell box. Chicago: (Printed by Donahue and Henneberry ) for the author, [1895]
Set Alert for Similar Items

first edition. of the utmost rarity. prints a prefatory letter from frederick douglass addressed to wells. Ida Barnett Wells (1862-1931), journalist, newspaper editor, civil rights advocate, and feminist, was born a slave to slave parents in Mississippi, just months before Lincoln issued his Proclamation. Her father, a carpenter, was intelligent and considered to be a "race man," one who sought to educate and elevate the race. Ida attended the Freedmen's School and Shaw University (now Rust College) in Holly Springs, where she was expelled for her "rebellious behavior and temper" after confronting the president of the college. Rebelliousness became her strength. On May 4, 1884, a train conductor on the Chesapeake and Ohio Railroad ordered Wells to give up her seat and move to the smoking car, which was already crowded with other passengers. The year before, Supreme Court had struck down the federal Civil Rights Act of 1875, which banned racial discrimination in public accommodations. Wells however refused to give up her seat-- 71 years before Rosa Parks showed similar resistance on a bus. The conductor, and two other men, dragged Wells out of the car. When she returned to Memphis, she gained notoriety after writing a newspaper article for The Living Way, a black church weekly, about her treatment on the train. She then hired an African-American attorney to sue the railroad. When her lawyer was paid off by the railroad, she hired a white attorney, and won her case. On December 24, 1884, the local circuit court granted her a $500 settlement.
In 1889 Wells became co-owner and editor of Free Speech and Headlight, an anti-segregationist newspaper. In March, 1892, with racial tensions rising in Memphis, violence against blacks was becoming common. Three of Wells friends, Thomas Moss, Calvin McDowell, and Henry Stewart, owned the People's Grocery Company which was doing well, and was seen as competitive with a white-owned grocery store, across the street. While Wells was out of town, a white mob attacked her friends store and during the melee, three white men were shot and wounded. Moss, McDowell, and Stewart were arrested and jailed. Before there could be a trial, a large lynch mob stormed the jail and killed the three men. As a result, Wells published a pamphlet titled Southern Horrors: Lynch Law in All Its Phases. In 1895, at her own expense, she published the present booklet, "A Red Record, a statistical report and stinging indictment on lynching in America from the end of the Civil War up to 1894." Having examined many accounts of lynching based on the alleged "rape of white women," she concluded that Southerners concocted rape as an excuse to hide their real reason for lynchings: black economic progress, which threatened not only white Southerners' pocketbooks, but also their preconceived ideas about black inferiority. The same year that A Red Record was published, Wells married Ferdinand Barnett, an attorney, becoming one of the first American woman to retain her name in marriage. There are only three copies of A Red Record located in American institutions; others listed are on microfiche. 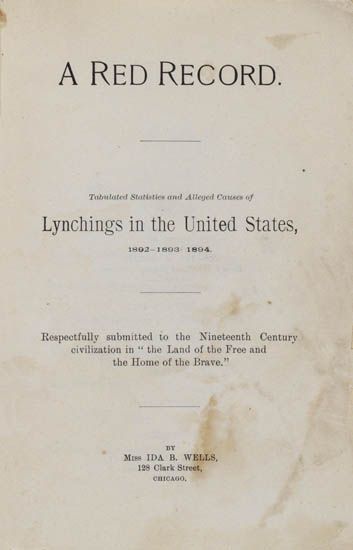 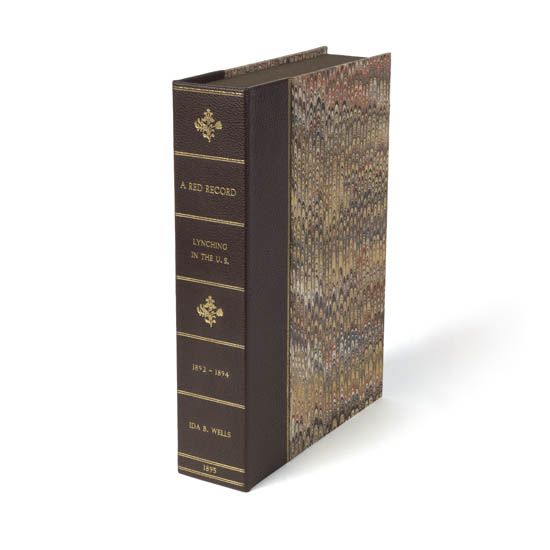